Colt.46 chart their own path with original country debut. 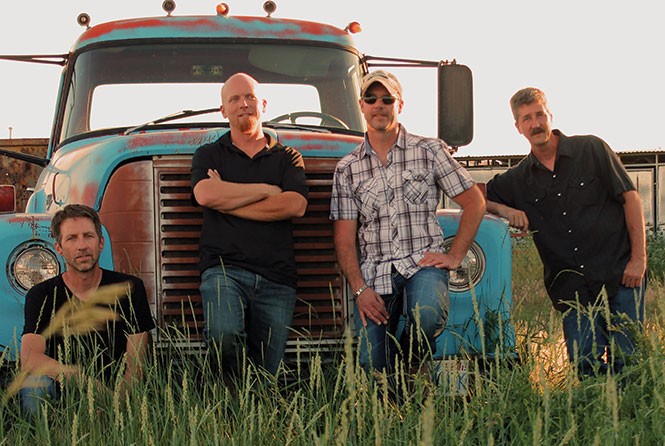 Each member of the Ogden-based country foursome Colt.46 spent years slogging through cover bands and occasionally crossing each other's paths, so they have more than enough mileage as musicians between them. But to lead singer/guitarist Dale Condie and drummer/vocalist Dan Robbins—who also share much of the songwriting load—this band is more than another gig. Colt.46 is the culmination of long-held dreams of ditching the covers and making a few classics of their own.

"Dan and I always wanted to do original music, and the situation just wasn't right," Condie says. "[With Colt.46], it finally felt like the right group of people, and that we could really do something."

Their debut album, which they independently released in August, is called Hang-Fire (Colt.46.com). In firearms terms, hang-fire is the lag time between when the trigger is pulled and when the bullet fires. Condie describes his time covering other artists' songs and moving from band to band as his own personal lag time. Now it feels like the bullet's left the chamber. "We're a little bit older, without revealing our ages," Condie says. "We're finally doing the original music we always thought we were going to do all along."

While the songs are original, there's a studied familiarity that any country fan will recognize. Hang-Fire is a faithful tribute to country's tried-and-true themes of heartache, good times and the open road. It's a worthy thesis, after decades of country music education—and those years finally seem to be paying off. "I really dig when we're playing our songs and people are enjoying them more than the covers," Robbins says.

There's the raucous barroom shout-along "You Owe Me a Beer," with its instantly memorable chorus of "Hallelujah and amen/ Son of a bitch/ Where have you been?" There are heart-achy ballads such as "This Old Guitar" and "Trains," and the laid-back, Bakersfield-inspired "Every Time You Put Me Down," which feels like cracking open a cold beverage after a hard day at work. Hang-Fire is an album best played in a pickup truck with the windows rolled down on a long stretch of highway.

That's especially true for the anthemic "Supposed To Be," a fitting opener for an album that was recorded on the band's own dime after years of delayed dreams. It hints at the freedom—and perhaps recklessness—of starting down a new road. Condie sings, "Would it be so bad if I kept on driving?/ 'Cause there's something out there/ I can almost taste it/ calling out to me / Yeah, they're almost saving me/ from who I might become/ to who I'm supposed to be."

Colt.46 distinguishes itself with an endearing antipathy to genre constraints. They don't mind mixing in some classic and outlaw country from the likes of Waylon Jennings or Hank Williams. But they also take cues from artists such as Steve Earle or Jackson Browne, singer-songwriters who often straddle that thin line between country and rock. "I think a G-chord with distortion on it's the same for any band all the way around," Robbins says.

Authenticity is Colt.46's aim. On their website, just below the streaming samples of Hang-Fire, they write, "So set aside your expectations of modern Nashville pop, but remember that good things used to happen there. Cast your eyes westward to the alternatives available to the country music enthusiast." Colt.46's stubborn insistence on not only writing their own songs, but also making it a group effort, bucks against the formulaic, assembly-line nature of modern Nashville.

"[Songwriting] really is work," Condie says. "You start from scratch, you try to create a song or some piece of music and say something that other people can relate to. Hopefully we've got decent bullshit filters."