Thinking Way Outside the Bun 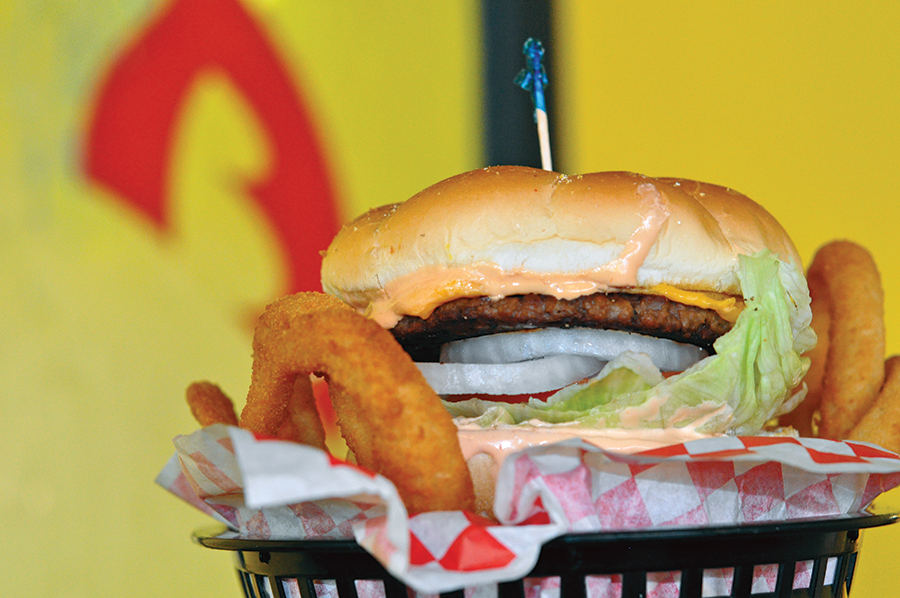 Welcome to the future. We have self-driving cars, our telephones are mini-computers and delicious fast food hamburgers are not necessarily made from dead cows.

Both of these burgers look and taste like beef, not like the veggie burger you tried 10 years ago. Touted as "the future of protein," you can buy the Beyond Burger at grocery stores for about $6 for a two-pack. Trace amounts of beet juice give this plant-based burger a convincing bloody pink hue; throw them on a grill or a hot cast-iron skillet, the burgers sizzle and bleed. Satisfying and tasty, the Beyond Burger has a whopping 20 grams of protein from—get this—peas. They're made without GMOs, soy or gluten.

Impossible's counterpart is not sold in stores. The only way you can taste it is ordering it at a restaurant. The burger is juicy, flavorful and looks and tastes so much like beef, that every time I order it, I'm convinced the staff has accidentally given me a real hamburger. The reason it's so realistic lies in the fact that Impossible Foods has figured out how to make a plant-based heme (the essential molecule that gives meat its meaty flavor) by genetically modifying yeast. It's called soy leghemoglobin. If you're worried this all sounds a little too Soylent Green, rest easy knowing the company went above and beyond the U.S. Food and Drug Administration testing requirements. They even conducted a study feeding rats soy leghemoglobin, which was not well-received by the animal rights community. There's 19 grams of protein in the burger that comes from potatoes and soy.

The two burgers are tasty and calm your conscience when it comes to animal welfare and global warming, but are they better for your health? Not really, according to the nutritionists interviewed for a recent Huffington Post article. While they offer a protein punch, both brands rely heavily on coconut oil, which is high in saturated fat and the calorie count is similar to its beef counterpart. Oh, well.

Still, consumers have been clamoring for them, and fast-food chains known for their commercials featuring juicy, sizzling beef have listened. Carl's Jr. added the charbroiled Beyond Famous Star with cheese to their menu. Del Taco is offering signature tacos and burritos featuring Beyond Meat. Impossible Foods is not far behind. How about chomping down on an Impossible Whopper at Burger King, or scarfing a slice of Impossible sausage pizza from Little Caesars?

In Rose Park, Apollo Burger is a popular lunchtime destination. A line of construction workers, business people, state employees and soldiers dressed in Army fatigues flow out the doors each weekday at noon. Cars in the drive-thru, backed up onto the street, idle and wait. With the addition of the Impossible Burger to the menu, I've been among them, weary from a long day at work and craving sustenance in the holy trinity of hamburger, French fries and an ice-cold Coke.

Keeping up with dietary trends, Apollo added a veggie burger ($5.79) to their menu six years ago. Made from black beans and veggies, it's the polar opposite of the pastrami cheeseburgers the eatery is known and loved for. As one of the few burger chains to offer a vegan option, Apollo demonstrates their ability to think outside the bun. Vegans and vegetarians will gladly hand over their cash, if only you give us options. "We don't sell a lot," Andrew Baguley, Apollo's director of operations, admits. Paige Jacobson, director of marketing, is quick to add, "For a veggie burger, it's pretty good." I've ordered the veggie burger (with avocado) to justify eating their French fries, which are the best around, but I'd rather spend my money and daily caloric intake on an Impossible Burger. A few customers I've talked to prefer the OG burger, and, interestingly enough, sales for the veggie burger have not decreased with the introduction of the Impossible Burger.

With all the media attention Impossible Burger was getting last year, Baguley knew adding it to the menu would bring in millennial dollars. A menu revamp was in the works, and the addition of the Impossible Burger seemed like it would be at home on the joint's fancy new digital menus. Convincing the local chain's managers and owners was not easy. "It was not obvious that it was going to be a winner," Baguley says, adding that they've sold four times more Impossible Burgers than originally anticipated. "I thought it would be good, but I didn't know it would be this good," he says. "We are now the No. 1-selling restaurant of Impossible Burgers in Utah."

If you've tried the Impossible Burger from Apollo (pictured), it's easy to understand the immediate success. At just under $7, the price is right, the charbroil is delicious and the toppings are fresh. Each burger comes with a thick slice of tomato, onions, lettuce, and a dollop of Apollo Sauce. Vegans, skip the sauce and ask for a lettuce wrap or pay 99 cents extra for the gluten-free bun (which also happens to be vegan). You can also substitute an Impossible patty on any other burger for an additional cost. The Athenian burger, which comes with roasted red peppers, feta cheese and homemade tzatziki could be a good option. Their mushroom Swiss burger also sounds like a winner.

So what swayed Apollo to take a gamble on Impossible vs. Beyond? "You can buy the Beyond Burger anywhere, and the Impossible [one] is better," Baguley says. I have to agree with him. There's a Carl's Jr. nearby, but I'm rarely tempted to indulge in one of theirs, because I have a package of them at home.

What's next for Apollo? "We're evolving with the times and the customers," Jacobson says, while Baguley muses about finding a supplier for vegan pastrami. Personally, I'm holding out for vegan milkshakes.