Third of a Trio

Park City adds a new location to a restaurant family. 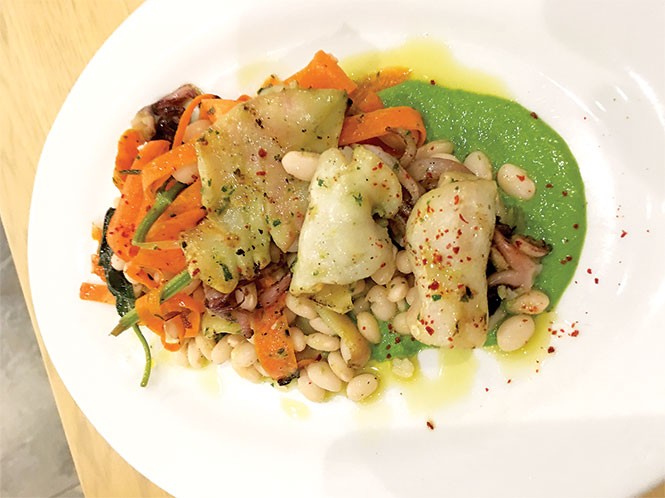 It's easy to forget, but in the spring of 2002, when David Harries opened the first Café Trio (680 S. 900 East, 801-533-8746, triodining.com) in Salt Lake City, it was a big deal—unlike anything else Utah offered at the time, including a menu packed with artisan wood-fired pizzas and flatbreads, which today would be routine. The wine list was also innovative, with a small but well-focused selection, all available by the glass or bottle. At the time, I wrote this: "David Harries has produced the kind of restaurant I dream about: Not a Michelin three-star mecca of fine dining, but a hip and sumptuous-looking restaurant with tons of buzz appeal, good food and prices that make you scratch your head and wonder how he does it." Café Trio was a breath of fresh air.

That was then; this is now. Fast forward 15 years to the opening of a third location in Park City's Kimball Junction vicinity. Restaurateur Mikel Trapp is now owner of all three, including the aforementioned spot downtown and a newer one in Cottonwood (6405 S. 3000 East, 801-944-8746, cottonwood.triodining.com). With his latest addition, he has upped the ante.

For starters, Trapp has rehired Logen Crew as executive chef to head the kitchen in Park City. Crew worked previously at Log Haven, Fresco Italian Café and Current Fish & Oyster, and has been brought in to update and expand the restaurant's offerings. Word has it that his new items will make their way to the Salt Lake City menus. I hope so, because there is a lot to love about Trio 3.0.

"I like what you've done with the place," I remarked to co-owner/operator Dan Camp upon my first look at the space. Located across the street from the new Whole Foods and adjacent to a Hampton Inn, Trio is in a space formerly occupied by a Ruby Tuesday—but you'd never know it. A floor-to-ceiling, wall-to-wall makeover left no trace of the casual chain eatery. A large, backlit bar is the centerpiece of the restaurant, and a wood-fired pizza oven greets customers next to the entrance. The space is posh and modern, but also relaxed.

"That looks awful. I could only eat four or five of those," my funny friend Joy remarked upon delivery of Parmesan flatbread ($4). Indeed, this simple starter is outstanding, and requires no sauce or extras. Additional flatbread options include one with tapenade, cucumber and chickpea purée, and another with fresh rosemary, goat cheese, tomatoes, roasted peppers and caramelized onions.

Since Trio has a dedicated bar area, you can pop in just for a drink. On such an occasion, you might want to nibble on something small, like housemade burrata and mozzarella with roasted tomato, basil oil and grilled bread ($13). My favorite starter is the bowl of three tomato-braised meatballs with ricotta and basil ($9); they're hearty and heavenly. Another outstanding small-plate offering is grilled calamari ($12) with white beans, shaved carrot and charred lemon-scallion pesto.

Café Trio is a welcome addition to the Park City dining scene, and I look forward to seeing some of its new menu items soon at Salt Lake locations—Chef Crew and his crew are working on that now.