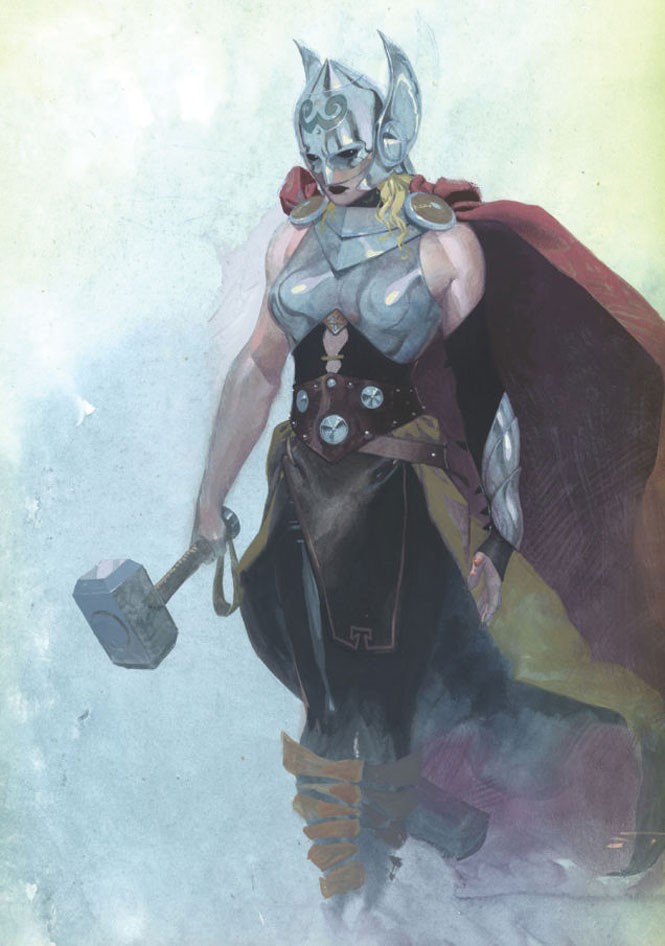 "Whosoever holds this hammer, if he be worthy, shall possess the power of Thor."

According to Marvel Comics, these are the words carved onto Mjolnir, the hammer of Thor, the Norse god of thunder. There have been times when someone other than Thor has picked up the hammer, found himself imbued with his power and proceeded to kick ass and take names. The alien warrior Beta Ray Bill and human architect Eric Masterson both took on the power. After they proved themselves supremely worthy, Odin eventually gave each of them their own weapon imbued with Thor's power—called Stormbreaker and Thunderstrike, respectively.

These were popular characters in the Marvel Universe—Beta Ray Bill is easily one of my favorite Marvel characters—and no one seemed to bat an eyelash when these masculine figures wielded Thor's power. But Marvel recently announced that Thor will be finding himself unworthy of his power, and a woman will be picking up the hammer. Thor will still be kicking around the Marvel Universe, hopefully paying his penance and presumably wielding Jarnbjorn, his unpowered axe. This woman—about whom, at this point, we know nothing—will wield Thor's power and take her place among the Avengers.

Sounds like a lot of great storytelling potential there, right? And it's being written by fan-favorite Jason Aaron. What problem could anyone possibly have?

Facebook, Twitter and comment sections the world over have been filled with snarling fanboys dropping misogynist pearls like, "What are they gonna call her now? Whore?" and "I hate all this manipulation of characters just to 'appeal to everyone.' They suddenly want to change already-written character's races and sex, and that's just not cool."

I know. I'm facepalming harder than Picard too. I wish I could show all of those Internet commenters the face of my daughter—who loves dressing up as Thor—when she found out that a woman was going to wield his power.

But the outrage doesn't end with Thor. Marvel Comics also announced that the mantle of Captain America would be passed on to Sam "The Falcon" Wilson, a character audiences loved in this year's Captain America: The Winter Soldier. Over the past couple of weeks, people have been decrying Marvel's attempt to be more "politically correct," which has somehow turned into a codeword for "liberal claptrap."

The story is the same for any comic-book publisher that changes the race, gender or other key traits of an established character. Remember when they made the Green Lantern from Earth 2 gay? Or even when they had a British guy play Superman in a movie? Same outrage.

But here's the thing: Broader representation in comics is a good thing. Of the trinity of main characters in the Avengers, 33 percent of them are still white males. After 75-plus years of white-male dominance, that number seems more than appropriate. I want to read about how people other than those who look like me handle super powers, so that I might empathize with them and get to know them better.

After you get to know them, they're not quite as different. And the more we all read stories like this, the less outraged and frightened we'll be the next time a change like this—no matter how temporary—happens.