Utah Shakespeare finds the method to emerge from a crazy year into a 60th anniversary celebration. 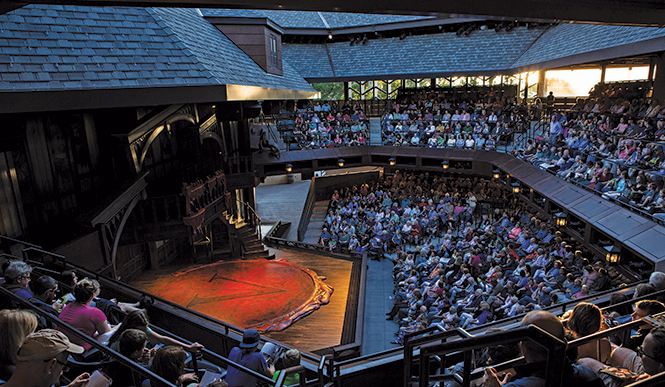 In the spring of 2020, Utah Shakespeare artistic director Brian Vaughn had to deal with the uncertainty of a season that was off, then on again, then off again. This year, he has the pleasure to oversee not just a return to the stage, but a particularly momentous season for the nationally-honored company.

This summer marks the 60th anniversary for Utah Shakespeare, recognizing the unique vision of the late Fred C. Adams to launch an annual Shakespeare festival in the middle of the Utah desert in 1961. The 59th season, unfortunately, fell victim to the COVID-19 pandemic, after the company initially announced that it would be able to hold a modified season before ultimately being forced to cancel the planned productions.

"It was a pretty tumultuous time, I have to be honest, as I think it was for most people in our industry," Vaughn recalls. "There was a lot of back and forth, a lot of uncertainty. We were really pushing right up until the last minute to know what we could do. ... The main reason we cancelled was recommendations from Actor's Equity, and it just wasn't right as far as case numbers increasing in our state. Making that call was incredibly challenging, but I think it was the right thing to do, especially looking at it on the other side of it."

While an entire year without in-person productions strained the resources of many performing-arts organizations, Vaughn says, "I think we weathered the storm pretty strongly. We saw an outpouring of support from a lot of our patron base and donors. ... We also had great support from local and state governments, foundation support was very strong, and Southern Utah University was extremely supportive in navigating what it might look like as far as our full-time staff here. It was really a community effort."

"I think the timeline was in our favor a little bit, halting prior to everyone arriving" Vaughn adds regarding the ultimate decision to cancel the 2020 season. "Later, it might have been a little more challenging."

Things still seemed uncertain in the spring of 2021, as the traditional dates for the summer season loomed. "We really didn't get the full go-ahead until April," Vaughn says, "which is really wild to think about, considering it's June right now. ... We had to go through a lot of measures, in conjunction with Actor's Equity and the other professional unions we work with, and navigating state and local guidelines. Even now, it's a little bit of a shifting target."

One thing that was clear to Vaughn, however, was that most of the plays that were planned for the 2020 season—including the Shakespeare plays Pericles, Richard III, The Comedy of Errors and Cymbeline—would carry over to 2021. There was definitely a pragmatic component to that choice, as pre-production work on costume and set design had already begun for those shows in 2020. But for the other components of the season, Vaughn says, choices like adding the musical Ragtime and Lynn Nottage's play Intimate Apparel came down to "a combination of us strategically thinking of what we would do for economic reasons, and titles that felt relevant, that could be conversation pieces."

While those changes made sense from an artistic standpoint, they did mean that some of the individuals originally hired to be part of Utah Shakespeare's 2020 repertory company wouldn't necessarily be part of the 2021 company. "We set out to try to hold on to a lot of those agreements we had in 2020," Vaughn says, "but the reality was that it's a different season, and we had different directors, shows that had different demands. ... We are a full rotating repertory company, which is in some ways a little bit of a dinosaur, because it's challenging just for this reason, logistically as well as financially. Sixty actors have to do eight plays, and the demands shift for each play."

With the productions themselves set, there was still the matter of the guest experience, and what would and would not be possible under current conditions. While the "backstage tour" component familiar from previous seasons has been eliminated to reduce artist/guest interaction, most of the other elements of a Utah Shakespeare season are in place. Vaughn notes that CDC guidelines for mask usage continue to evolve; at press time, Utah Shakespeare's indoor venues will still require masking of all patrons, while the outdoor theater will be "mask-friendly" with fully-vaccinated guests welcome to go maskless.

Those who do attend will be able to join in that celebration of the company's 60 years, including a planned tribute to Adams, who passed away in February 2020, adding another level of tragedy to last year. But aside from any specific commemorative events, as Vaughn observes, "a lot of it is just the reality of being open is its own terrific celebration. I've heard from countless people who are just so excited to come back to the theater. And for these artists to get back to doing what they love, is just so invigorating."