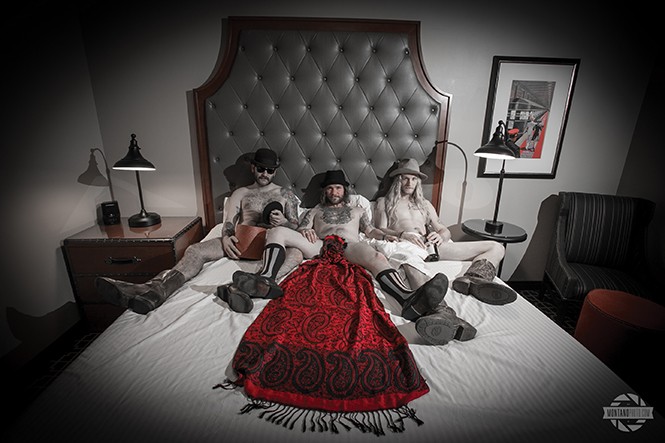 Look at that picture. Do you see the lengths to which some musicians will go for attention? Especially singers; they always have to be in the spotlight. So here are Kirk Dath, Sam Smith and Jordan Matthew Young—respectively repping Crook & The Bluff, Pig Eon and Candy's River House—in their skivvies, just beggin' for it. Your attention, that is.

So many questions, right? Why would the frontmen of three of Salt Lake City's biggest bands pose in the raw like that? Why do they need more attention if they're so great? Does Sam Smith really need that much fabric to cover his junk? Is this a new supergroup called Schnooks in the Buff?

"I have an awkward chubby," Smith wisecracks from behind the bar at Patrick's Pub, where he works. On the other side, Young laughs as he dials Dath, who's in Phoenix sorting out his father's estate. Puerility notwithstanding, these men are no schnooks; they're three of SLC's hardest-working musicians, possessed of singular visions. In Crook & The Bluff, Dath plots theatrics to complement the band's cinematic, psychedelic Western-blues songs. Smith is a song machine who simultaneously dropped new albums from both Pig Eon and the Samuel Smith Band in January. Young is the musical nucleus in Candy's River House, a triple-threat with pen, mic and guitar. All three are distinctly charismatic, supremely gifted, wildly prolific artists who make people take notice.

Yet this photo is a bid for attention.

It's from the posters you might have seen around town for Ménage à Trois, an event conceived over drinks in an Escalante parking lot. The Bluff and Candy's had just performed at the Escalante Smokehouse and, "we were kinda spitballin' ideas," Dath says. They wanted to do something more compelling than the standard gig. Ultimately, they devised a way for The Bluff, Candy's and Pig Eon to be on stage at once, with nonstop music. Dath, Smith and Young open the show with a joint acoustic set, soon joined by their bandmates for a lengthy song-for-song show where, while one band is spotlighted, members of the other acts pop out of the dark for guest solos, while everyone is flanked by dancers and aerialists. In an event like this, Dath says, "the audience gets to see us in a different state." Or, you know, notice them, period.

Although these three bands are respected locally, they perceive a certain apathy from sparse attendance at shows. It's not a new complaint; local bands have fled the same indifference for the past 20 years, usually moving to musical hotbeds like Portland. Late last year, popular local psych-rockers Max Pain & the Groovies decamped to New York City. This past March, another well-regarded band, Quiet Oaks, told City Weekly they plan to relocate to Nashville later this year. "We can sell-out shows in Chicago and Nashville," singer-bassist Dane Sandberg said, "but we still haven't sold out the Urban Lounge."

The "Ménage" bands relate similar concerns. The Bluff and Candy's already have plans to move to NYC and Los Angeles, respectively. This is because, Young says, he can take his band on the road for 30-40 dates in the U.S.—or in Europe, where he was playing just last week—and be treated like a rock star. In Utah, he might have four or five bookings a week, but they're mostly in Park City because the crowds are larger. "We've had plenty of killer shows in Salt Lake that were packed, he says. "We just seem to get more attention out of state." Dath has experienced similar treatment on The Bluff's tours.

So they're getting creative, perhaps too late. But it says something that the bands still want to engage SLC music fans. And it's indicative of a trend among local acts. Bands like The Weekenders and Conquer Monster have teamed up with the Municipal Ballet Co. for performances. Red Bennies moonlight as Jazz Jaguars, playing lounge covers of their own material at the Twilite Lounge every Wednesday, with a different local band sitting in each week. It's almost like musicians are trying to spice up a stagnant marriage with lingerie or threesomes.

But it's not necessarily a problem specific to SLC. Dath says the whole cookie-cutter idea of a show "needs to be rocked" and that it's incumbent on the bands to be more adaptable. So, "instead of the audience trying to make us keep up with them, we're gonna try to make them keep up with us," he says. Young adds, "We're giving the current attention span a run for its money."

Smith laughs. "Those poor suckers! We should make 'em drink as much as we do, too, see how that goes."