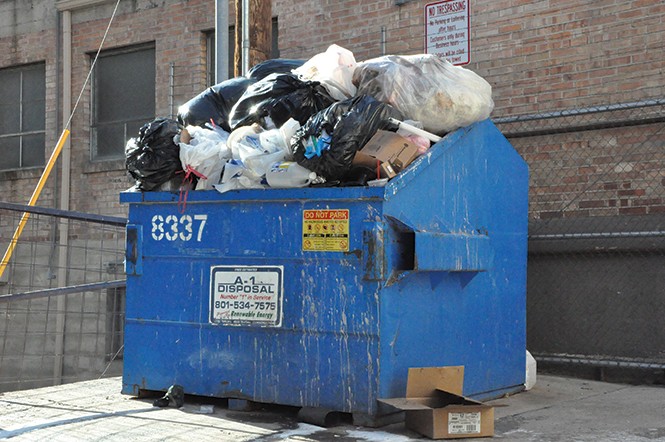 A safe neighborhood, clean carpet, slick view from the deck—these are three ingredients that Salt Lake City's itinerant renting population, which accounts for half of the city's souls, might look for as they move from place to place.

But it's only after the couch has been hauled up the stairs, the television mounted to the wall and the ink's dry on that one-year lease that a renter realizes that the apartment building doesn't offer recycling services. The gravity of the situation sinks in as a renter stands by the dumpsters, a bag of trash in one hand and a bag of plastic jugs, empty beer cans and paper in the other, fretting about what his or her mother, elementary school teachers and homeowner friends with blue recycling bins in their driveways would say as all the bags get tossed into one bin, destined for the landfill.

No exact numbers exist for how many multi-family apartment complexes in Salt Lake City lack recycling bins. But according to a city survey conducted in 2012, only 10 percent of waste from all of the city's businesses and its apartment complexes is recycled. And because roughly 50 percent of the waste in the city is generated by businesses—this lack of recycling poses a real threat to the city's goal of becoming a zero-waste city by 2040.

The city's attempts to grapple with this drought of recycling have taken the shape of a proposed ordinance, which would phase in over several years and require businesses and most multi-family apartment complexes to provide recycling bins.

"It's noticeable," says Debbie Lyons, the city's sustainability program director, of the number of residents who bemoan the lack of recycling opportunities. "We've heard a lot from people who just wanted to be able to recycle where they live, regardless of where they live."

The ordinance has been in the works for more than a year and could be voted on by the council later this month. It has received mostly favorable reviews from residents who are tired of being forced to either horde items and deliver them to a collection facility, or toss them into landfill-bound garbage, but some business associations have registered concerns.

The Utah Restaurant Association and the Utah Apartment Association both say they're worried that a citywide recycling mandate could force business owners to undertake costly renovations to accommodate the bins, which could result in a loss of valuable parking spaces.

"I think all landlords love recycling and I think it's a good idea," says Paul Smith, executive director of the Utah Apartment Association, which represents 104,000 apartment owners in the state. "The issue is always cost."

Smith says mandating recycling programs is fine, but renters should know that landlords will pass any increased costs associated with recycling onto their tenants.

To soothe the concerns of Smith and other business interests, multiple loopholes and exemptions have been woven into the ordinance. For instance, if a business doesn't have room for an additional bin, that business could be exempted.

Importantly, the ordinance would apply only to businesses and apartment complexes that weekly generate more than 4 cubic yards of waste (the equivalent of roughly eight curbside bins used by households). A staff report prepared for the city council notes that this amount of trash and recycling would most likely be created by apartment complexes with 15 or more units, and by businesses with between 10 and 15 employees.

The ordinance is arriving at an awkward moment in the recycling world, says Matt Stalsberg, owner and general manager of ACE Recycling & Disposal, the largest independent trash and recycling hauler in the city. While passage of the ordinance would result in more business for ACE, Stalsberg says space restrictions, increased truck traffic and a worldwide market that is currently oversaturated with recyclables, all contribute to his subdued enthusiasm.

"Many other cities have adopted these types of programs, and we have enough infrastructure now that we could easily handle a mandatory amount," Stalsberg says. "Whether I'm for it or not is questionable. The space is already such a huge issue in Salt Lake."

Stalsberg says that many of his clients have a difficult time fitting one bin on their property and will struggle to fit two. And in Salt Lake City, trash disposal rates at landfills are still a bargain, Stalsberg says, making it even less desirable for business owners to go out of their way to provide recycling.

"Unfortunately, that is what's most economical for us at this time," Stalsberg says of dumping garbage in the landfill.

But Stalsberg says the city is on the right path, and as a garbage hauler, he understands the importance of diverting waste away from the landfill. "I think that what they're asking is pretty reasonable," he says. "For a mandatory program, I think it's pretty well put together."

John Lair, president and CEO of Momentum Recycling, which provides all types of recycling services—but no trash-disposal services, says it is often more cost efficient to throw everything away than to recycle.

"For a business that doesn't consider anything but the bottom line, it's tougher now to justify recycling," Lair says. However, Lair says that even though recycling rates in the business community appear low, many businesses choose to make sustainability a priority, even in the face of increased costs. "It's nice to see the city stepping in and saying, 'Hey, if you want to do business in Salt Lake City, you have to do these things.'"

That a business "has" to do anything, though, might raise some red flags with state lawmakers who, despite fervent cries for local control, have a history of undoing Salt Lake City's policies.

The most recent example occurred during the 2015 legislative session, when the Legislature passed a law forbidding municipalities from requiring restaurants or businesses with a drive-through window to accommodate bicyclists and pedestrians. The law was prompted by a Salt Lake City ordinance approved earlier in the year.

Salt Lake City Council Chairman Luke Garrott says he's concerned that the recycling ordinance could meet a similar fate. Melva Sine heads up the Utah Restaurant Association, and like her counterpart, Smith, at the Apartment Association, she says that the economics of a mandatory program must make sense to restaurants. If a recycling ordinance costs restaurateurs money, then her organization will have a hard time backing it, she says.

"Restaurants, per se, have concerns," Sine says. "Sustainability is a hot topic and one that the restaurant industry is on top of because we can save some money by conserving. The question is, does the money we're saving outweigh what it costs to actually provide the service?"

Momentum Recycling's Lair says that the ordinance allows enough loopholes to accommodate businesses that simply cannot comply, either because of space restrictions or because of costs. As the city continues to grapple with how best to deal with the hundreds of thousands of tons of waste it produces each week, Lair says his hope is that the ordinance on the table now will get even stricter.

"It's a great step and, hopefully, it's just one first step and there will be a lot of more to come later," he says. "We would hope that this is a good compromise starting point, but that over time, as grandfather periods expire, some of these loopholes get tightened up so that every business is participating. But we applaud the start."