What's the Big Latch On? 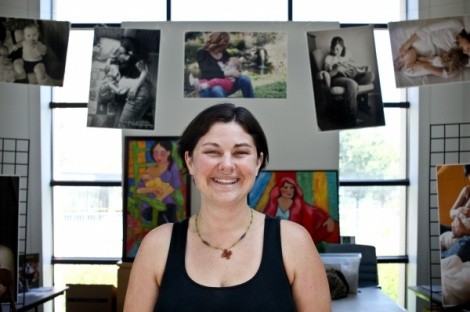 Timbra Wiist is all about breastfeeding. She’s a photographer who specializes in nursing portraits; a leader in the Murray chapter of international breastfeeding support organization La Leche League; and chairwoman of this year’s Breastfeeding Cafe in the Salt Lake City Main Library (210 E. 400 South) held through Aug. 14 as part of World Breastfeeding Week. Aug. 6 is also the Big Latch On, a national synchronized nursing event.


Why breastfeeding?
We hear a lot about the benefits of breastfeeding, but the important thing to know is that when you don’t breastfeed, you increase the risks of a lot of things: childhood obesity, diabetes, adult diseases, asthma, allergies. For the mother, you increase your risk of breast cancer and cervical cancer. Those are some tangible health benefits. There are so many benefits to breastfeeding with the relationship with your child—understanding their developmental stages. With breastfeeding, you really get a sense of who your child is. There are a lot of physical benefits, too: their eyesight developing quicker. For me, it’s the lazy way. There’s not a lot of thought when you leave the house, you don’t have to pack a lot of stuff.

What’s wrong with formula?
Breastfeeding is not an abnormal thing; it’s the norm. Feeding alternatively is not a normal thing. There’s been a resurgence of breastfeeding, and there’s been a resurgence of whole foods because people realized that TV dinners are full of junk. It’s the same with formula. Formula was made to be a prescription for mothers who couldn’t breastfeed or couldn’t be home. It was never meant to be a mainstream food. It is literally the fast food of infant food. It’s filled with additives. If you look at cans of formula, high-fructose corn syrup and partially hydrogenated oils are some of the top ingredients. You’re giving your child high-fructose corn syrup right out of the womb, and then we wonder why we have this epidemic of childhood obesity.

Do women who can’t breastfeed deserve judgment from other mothers?
There are women who can’t breastfeed. I would suggest that 9 times out of 10, that is because of lack of support or understanding in the first couple of days. Introduction of bottles or pacifiers by hospital staff in the first couple of days or a traumatic birth or stress can make it difficult. There are 3 percent of women in the world who literally cannot breastfeed. But no mother should ever feel guilty. We do the best with the information we have. When we look at breastfeeding, it’s like the second-best thing is formula. Really, formula is the fourth-best thing. First, it’s nursing at the breast, second is pumping your own breastmilk, third is using milk from a breastmilk bank—you can get that with a prescription—and the fourth-best thing is formula.

Do breastfeeding women get more flak in places where modesty is a focus?
I do think that the focus on modesty can be difficult; a lot of moms can be made to feel that they need to go elsewhere, or that they need to bottlefeed when they’re in public. And those things are all reasons why children wean early, because they just get the bottle more, or because mothers delay their children nursing because they don’t want to leave the conversation and go sit in the car, or in a nursing room, or a bathroom. I’ve never had anyone say anything to me. I can’t imagine my husband walking up to some woman and being like, “Can you put that away?” I can’t imagine! Who are these people? It is sometimes just a lack of understanding. If the general public understood that it’s a public health issue, and that not breastfeeding increases the risks of all these epidemics, they would be supportive.

I would rather have a mom wear a nursing cover and nurse her baby in public than not, or feel like she couldn’t nurse her baby at all. But some of those developmental things that we were talking about, like eye contact, which helps with eye development, is cut off. So, Mom, helping the public feel better, is actually taking some of the benefit out of the breastfeeding ritual.

What will be happening at these breastfeeding events?
The breastfeeding cafe has been going on for about six years. We usually have a rocker glider in here so moms can come and nurse, find information about breastfeeding resources and centers in the valley and have a comfortable place to come and find support. The Big Latch On is a La Leche League USA event, a world-record event. The first one was in the ’70s, in Berkeley, and it’s kind of jumped around from there. This year, it’s a nationwide event. They’re counting every mother who has a child latched on for one minute from 10:30 to 10:31 a.m. local time Aug. 6. We’re having it on the northeast lawn [of Library Square]. Registration will start about a half-hour before.

How long should a woman breastfeed?
The World Health Organization recommends two years as a minimum, though I think a lot of people look at that as a maximum. But it’s as long as mutually desired between mother and child. The adult immune system doesn’t come into effect until between 6 and 8, so you will see in some cultures—and even in this culture, though it’s not talked about—women allow their children to nurse for that amount of time. Breastfeeding also allows for natural child spacing, so you’ll see in some cultures—not ours so much—that there’s a natural age separation between children because breastfeeding holds off ovulation. If nothing else, the first three days are the most important, getting that colostrum in the baby and not introducing other sources of food.

What’s your view on the Whole Foods national nurse-in?
I do think it’s an opportunity for peaceful awareness. I’ve been part of a nurse-in. A couple of years ago, Applebee’s did the same thing, so a group of moms went and sat outside. People just stopped and asked. Some people don’t like you and some people do, but that’s kind of the way it is with everything in life—you can’t have an opinion without someone being opposed to it. If nothing else, I hope that it will give awareness to staff and to businesses that they need to implement a policy and make it part of orientation.