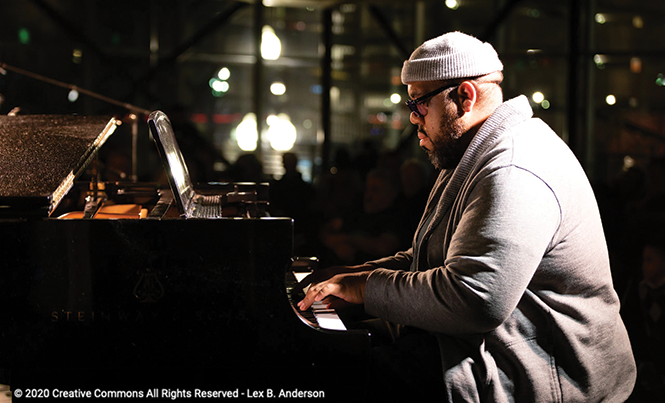 Musicians have lost a lot this year—their stages, their tours, their income, stability. They've also lost friends and colleagues. In January of this year, the Salt Lake City music community lost one of its brightest stars, Courtney Isaiah Smith, to COVID, at the age of just 37.

A Salt Lake City native, he was a pillar of the music community, and lived and breathed his craft. He played in church and in bands of all kinds, and taught jazz piano at universities around Northern Utah. It's a loss that's been felt by his friends, family and former bandmates throughout the course of this year, and one that will be felt for a long time.

To honor the place where Smith was and isn't anymore, a series of tribute shows has been organized in his honor, split up by the many genres which he played. The last of the trio is scheduled on Wednesday, Sept. 22, and Smith's friend and bandmate David Halliday is using his memories of Smith to make it the perfect tribute.

Halliday knows Smith as intimately as anyone would after playing music with them for 10 years, which was the case for the two musicians thanks to their co-directing the series of eight Jazz Vespers shows on the last eight Sundays before Christmas at the First Unitarian Church. Together, Smith and Halliday slowly developed a core group of musicians to play different musical tributes each week, and five years into comfortably playing as that Jazz Vespers Quartet, they were approached about doing Monday night shows at Gracie's downtown. With all the First Unitarian and Gracie's shows combined, Halliday estimates they did about 250 jam sessions as the JVQ.

That band was obviously a big part of Smith's musical life, and so it's at the center of the upcoming tribute. His place in the band has been filled by the pianist Tony Ellison, a talented young pianist whom Smith mentored. "I mean, I don't think that you could remove a more impactful person from the scene," Halliday says. "Courtney was a genius, a musical genius bar none. But he was also the kindest and sweetest, least egotistical person. He was like a perfect person."

The loss, Halliday says, has been felt acutely by people like the JVQ drummer Parker Swenson, who was close with Smith; Smith's fiancée and fellow local musician, Jazzy Olivo; and of course, Smith's mother. But Halliday is navigating Smith's death with some faith—that Smith, too good for this world, just can't be gone.

"I choose to believe that I'm going to see Courtney again. I feel like some people are too significant to just be gone forever," he says. "Like, this amazing, spiritual genius who affected so many people and had such a deep spirituality ... is just gone? I can't get behind that."

He notes ruefully, though, that it was probably Smith's passion for music and performance that led him back out into the world of playing live during the pandemic, despite his high-risk status. "If any of us had known, we all would have been like, 'No, Courtney don't play, don't go anywhere, whatever you do.' But we ... how can you know? You just don't know."

Whether or not you believe his presence continues in a spiritual sense, it is true that Smith is still around in other ways. In the months since his passing, videos of him playing have circulated on the internet, while reminders and mementos are often shared—most recently of course, by way of these tribute concerts. Halliday also says that there is much music to be heard from Smith yet.

"There are a bunch of recordings that haven't been released yet," Halliday says. "Speaking for myself, Courtney is on an album [of mine] coming out next year, then he's on another one after that. I'm really good at recording albums, but not at releasing them. ... Jazzy told me his laptop is full of original music that hasn't been released. There are multi-track recordings from a lot of the Jazz Vespers shows that are on separate tracks, meaning that we could mix them, mess with the levels and get them sounding fantastic."

Already out is the film Focused Life, for which Smith and musician Steve Lyman composed music. And considering Smith's status as a full-time musician who played in bands of all genres—from gospel, party music and R&B to funk, soul, pop and jazz—Halliday is sure more recordings from other projects and collaborations will start to trickle out into the world. "There's a whole legacy here that will live forever," Halliday says.

"I'm grateful that we decided to split the shows up because—with how many Jazz Vespers shows there were, and with how intimate we were musically—having a little 20 minute JVQ segment on a tribute show just isn't gonna cut it. We have to dig in," Halliday adds. "I really am excited to try to choose the right songs and combine the right people and make everyone feel something special."

The show is being produced in collaboration with Excellence Concert Series, who will be live streaming it and preserving it online, too. And, as at all Excellence Concerts, the show is free at the Gallivan Center, is open to all ages, and starts at 7:30 p.m. Visit excellenceconcerts.org for more info.