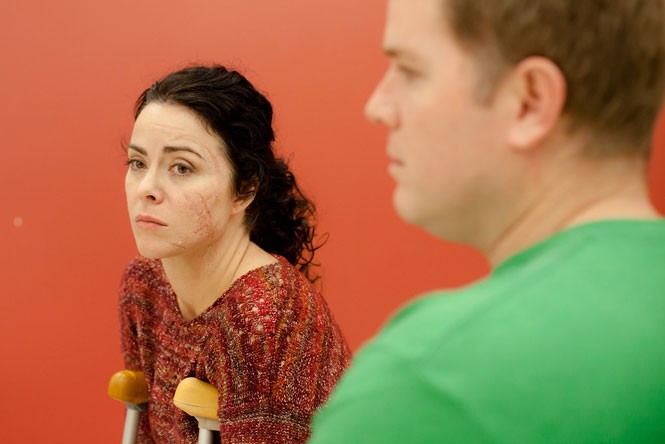 It is a rule—and if it's not a written rule, it should be—that critics can't hold a work accountable for not being a thing the critic wanted it to be, rather than what it is. Criticism is, after all, the study of what art actually is. It therefore may seem contradictory also to assert the critic's right to recognize something within a given work that would make for a better focal point than the one its creator chose. However, two examples readily present themselves in the plays Pinnacle Acting Company and Pioneer Theatre Company have chosen for their current productions.

Pinnacle's Time Stands Still—Donald Margulies' Tony-nominated look at a convalescent photojournalist and her longtime partner—is a natural choice for an acting company, as both surface text and subtext are gradually revealed through performance. There are two oppositional booby traps directors often face with such a piece: 1. Do "too much" directing, inorganically manipulating the performances to yield a desired effect; and 2. Do no manipulating at all, and let the actors' organic processes determine the entire tenor of the show, at the possible expense of pacing and narrative focus.

The latter is the lesser of two evils, to be sure, and L.L. West's direction of the cast of Time Stands Still in such a mode does not in any way damage the production, given the nature of the text they're working from. But it does lead to a piece that seems longer than it needs to, and given the power of emotion the protagonist Sarah (Melanie Nelson, in an excellent performance) channels in evoking the memory of her Iraqi "fixer," it leaves a lingering desire to see that story told in present tense, rather than as a dark cloud looming over a much more familiar New York-based relationship drama.

And the story about the "fixer" and Sarah is right there in the text of the piece, so it's not a case of seeing a play about puppies and being mad that it isn't about kittens. It's a case of seeing a play that's about people in an overly familiar situation, dealing with the recent memory of something that would have been a lot more interesting to explore. This is a fault of the text itself, not of Pinnacle's production of the play, but it does reduce the overall impact of the show. 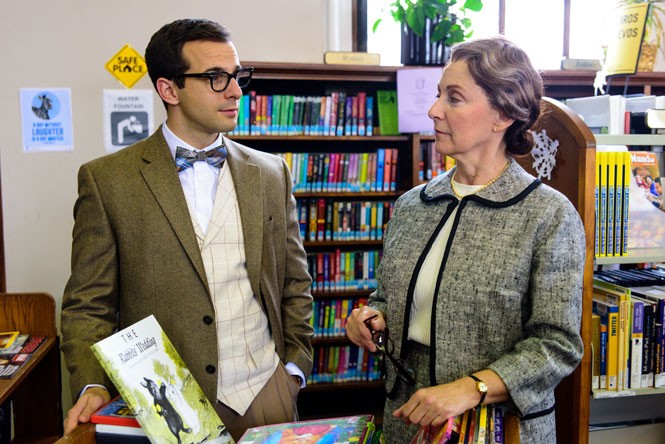 Pioneer Theatre Company's Alabama Story, based on real-life events in 1959 Alabama, faces a slightly different issue textually: that of being hard-done by current events. In the ongoing theme of duality, there are two different events with which Alabama Story finds itself inadvertently conversing. It's a fact-based story in which the inciting event is the publication of a controversial illustrated narrative, and as such is going to evoke the still-vivid specter of the Charlie Hebdo massacre. In Alabama Story's case, the issue of offense is simpler, as is the work in question: a children's book about a white rabbit and a black rabbit who get married. And of course, a racist state senator decides that the book should be banned, only to find himself pitted against a steadfast librarian who refuses to let it be.

This aspect of the play is straightforward to the point of audience flattery: Of course it's wrong to ban a children's book about bunny rabbits. There is also an ongoing story, about a friendship and once-romantic relationship between a white woman and a black man that's presented in the same way: Of course it's wrong that they can't be together.

This is where the other current event comes into play: the release of Ava DuVernay's extraordinary film Selma, set in the very same state not six years later. This production of the gentle, genteel Alabama Story is a fine, well-played one, top to bottom, but it suffers badly from opening the very same weekend as the film. Alabama Story resists taking political stands with the same fervor with which Selma notes that sometimes the simple fact of a human being's existence is itself a political stand.

It is, to be sure, extremely unfair to compare the two works, and doing so here is an unfortunate byproduct of coincidence. But timing, through no one's fault but Fate, often works against otherwise perfectly fine work.