Experience the mysterious beauty of heading into nature without a destination 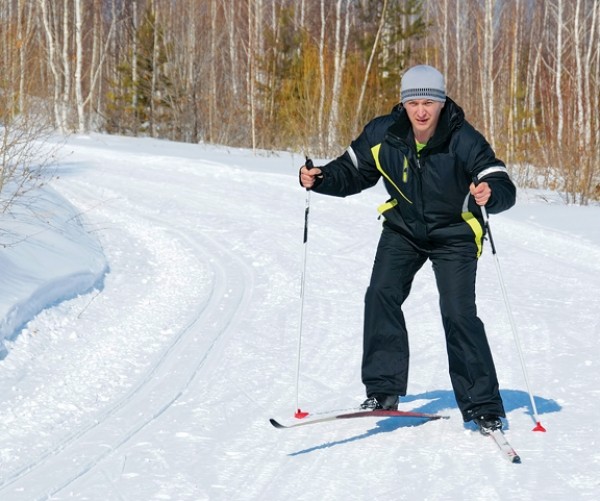 Alongside the parallel ribbons set by our cross-country skis, animal tracks pocked the knee-deep snow—deep, round holes similar in shape and stride to the pattern left by our dogs. We had been following the tracks for some time. Occasionally, they left our path and wandered over the ice shell that capped the canyon’s stream; sometimes they looped back on themselves so that we wondered if there weren’t two sets.

We had started that morning from a cabin in Fishlake National Forest in central Utah, with no specific destination in mind. The idea was simply to go. For an hour, we skied out along an old logging road, coasting over hills covered with dense fir and an occasional Ponderosa. It was a track we had taken the previous winter, but upon reaching the last familiar fork in the trail, we went straight, in a new direction.

As the trail narrowed, pushing us up against a creek that we guessed to be either the South Fork or the Beaver, coyote tracks appeared from the woods alongside us. When the prints lengthened in stride we knew a chase was on. The leaping tracks led us to a water seep, and a new set of marks—a fan of lines drawn lightly across the powdery surface of the snow. A turkey, we surmised, had been sipping water when the coyote came upon it—but with not a feather in sight, it appeared the bird had escaped.

When you’re taking time to move slowly through wild spaces, life unravels in ways we rarely get to enjoy. Though I never saw the coyote or the turkey, meeting their tracks and moving through the same space they had moved in felt like a gift. So, too, did feeling the chill on my cheeks when we moved from sun into lines of shade, or watching the springs along the trail send their water sifting down the red-brown, rock-crusted mountainside over patches of moss, reeds and wild-iris leaves.

No matter where we are in nature—a nameless wintery canyon or a mountain meadow in summer—giving oneself over to that space is an experience to savor. Kevin Fedarko writes about escaping into the wilderness deep in the Grand Canyon in his new book The Emerald Mile. For those who love the water, the rock and the secrets of a canyon, speeding on a raft through the Colorado River is antithetical to how it should be experienced. The point of being in canyon, he writes, is to break away from the hustle of daily life. Out where we don’t have to clock in at work, make sure dinner is on the table or rush the kids off to school, we can sink into another realm altogether. Fedarko writes that “if there is a point to being in the canyon, it is not to rush, but to linger, suspended in a blue-and-amber haze of in-between-ness.”

Escaping the habit of rushing through life is something that must be relearned continuously in small moments. And it’s difficult. Fedarko points to the story of Bernard Moitessier, a French yachtsman who, in the 1960s, took part in a race to become the first person to circumnavigate the globe continuously and unassisted. It took him six months of sailing halfway around the world to realize that he didn’t want to race at all. As Fedarko writes, Moitessier reached “a point in space and consciousness that would enable him to bear witness to the beauty and the complexity of the natural world.” At Cape Horn, Moitessier changed course but continued his solo journey for another four months before touching land.

To some, sliding up a side canyon at a snail’s pace, pushing through heavy snow, could seem like a lot of work with no measurable gain. After all, we didn’t even know where we were going, if there was an end, or what we’d find. And without a destination, how would we know when to turn around and retrace our steps back out?

But, as clichéd as it may sound, making our goal the journey instead of the destination was exactly what we were after. And there was only one way to do that—slowly, silently and on skis.Â