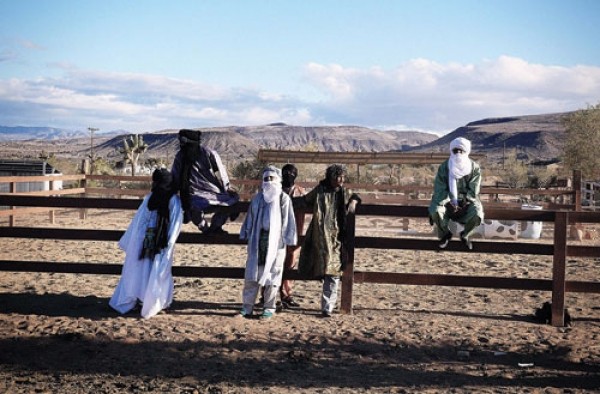 In Tamasheq, the language of the Tuareg people of northern Africa, the word emmaar speaks of two sides of the same coin: one nourishing, the other destroying. “Emmaar” means “what you can feel when you are very close to a fire,” says Tinariwen multi-instrumentalist and vocalist Eyadou Ag Leche via e-mail, through a translator. “It is both pleasant and dangerous. Closer, you get burned; adding distance, you can’t feel the heat anymore.

“It’s also a metaphor of the current situation at home, between war and peace,” he adds—and it’s the title of the Tuareg rock band’s latest full-length album, released in February, as well.

Home, for Tinariwen, is their beloved Sahara Desert, where the historically nomadic Kel Tamasheq, aka Tuareg, tribes have lived since as early as the fifth century B.C. Recent decades found the Tuareg in what is now northern Mali, but after Mali declared its independence from France in 1960, political turmoil in the area forced many Tuareg people to relocate to cities. The Tuareg were displaced to countries including Algeria, Niger, Chad, Mauritania and Libya; it was in a Libyan refugee camp that Tinariwen was formed in the ’80s.

When revolution ignited in Mali, Tinariwen joined in the fight for Tuareg independence. After the fighting died down, at least for a while, Tinariwen devoted themselves fully to their music. In the ’90s, the three original self-described “soul rebels” of Tinariwen were joined by a new generation of musicians, including Ag Leche, who had grown up listening to the band’s music.

Today, the situation in Mali remains unstable. When it came time to record Emmaar, “we couldn’t record at home as the situation was too unsafe for our crew,” Ag Leche says. So, for the first time, Tinariwen made an album outside of Africa, in an unfamiliar desert on the other side of the world.

For Tinariwen, Ag Leche says, the desert “is essential to us,” a fact that’s reflected in the band’s name itself, which is Tamasheq for “the deserts.” They couldn’t record Emmaar in the Sahara, but Tinariwen found a kinship with the desert surrounding Joshua Tree, Calif. “We need to feel the natural elements of [the desert], the sand, the silence, the air, the rocks, the feeling of freedom,” Ag Leche says. “We decided to record in Joshua Tree, by a friend, where we felt good and at ease. Of course, it was not home, but being in a desert was vital to us.”

Despite being influenced by Western music, Tinariwen wanted to get back to their musical roots of a distinctly Tuareg sound on Emmaar. “We wanted to record and get the sound of our debut, the rough guitars sounding, with our low-battery amps in the desert, and thanks to the good gear in America, we were able to produce that sound,” Ag Leche says.

The songs on Emmaar are sung in Tamasheq, but the sadness, joy and a host of other emotions transcend any language divide. “We sing both about love, nature, poetry, about exile, and about the current situation for our people,” Ag Leche says. “A big part of our songs are about our people suffering, and we want to spread the message of our community through our music and our lyrics.”

That message cuts straight to the heart on “Toumast Tincha,” a song as starkly beautiful and expansive as the desert, when Ag Leche sings, “The ideals of the people have been sold cheap, my friends/ A peace imposed by force is bound to fail/ And gives way to hatred.”

The emotions that come through most strongly on Emmaar, though, are longing and homesickness. Tinariwen calls such a feeling of nostalgia assouf, which Ag Leche says “can be compared to the blues” and is also the band’s term for their sound. No matter where Tinariwen may wander, they are always connected to their home through their “assouf”—their desert blues.

“Our home is traveling with us,” Ag Leche says. “Our desert, our family, our people are with us.”