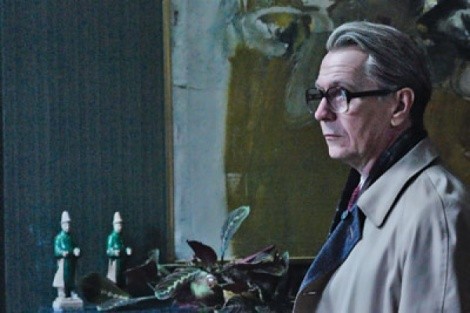 I haven’t read Tinker, Tailor, Soldier, Spy, John le Carré’s iconic novel of Cold War espionage and—if this sleek, elegant film has it right—repressed male emotion. So I wasn’t already keyed in to who all the players are, except vaguely recalling something about Alec Guinness wearing big, so-uncool-they’re-cool brainy specs in the 1970s BBC TV miniseries adaptation. I had no idea what the title even refers to.

This version just, you know, starts. No opening credits. Just British intelligence boss Control (John Hurt) intoning, “I want you to go to Budapest,” to agent Jim Prideaux (Mark Strong, sporting the worst haircut of his life) in a hellishly beige-and-mustard, cigarette-smoke-fogged 1970s. Something bad then happens in Budapest that suggests there’s a mole somewhere in the system. Then there are flashbacks to an MI6 Christmas party at which men in ugly, expensive three-piece suits exchange significant glances—and maybe homoerotic flirtations—and I’m instantly enthralled. It’s all so minimalist, spare and Scandinavian, as if someone made a James Bond movie in IKEA.

Director Tomas Alfredson—ha! Scandinavian!—drops us into the middle of the action, and trusts that we’re smart enough to keep up even if we don’t know the characters’ names—or, frankly, what the hell is going on. In this respect, it’s much like his grade-school-vampire flick Let the Right One In, except the thing no one will talk about is how national security and treasonous betrayal makes one feel, instead of how bloodsucking and school bullying makes one feel.

And we can keep up. It’s thrilling to encounter a movie that doesn’t dumb everything down and is clever enough to not need to, because it isn’t all about explosions. This is the 1970s; there isn’t even the “action” of people sitting in front of fancy computers, and no one has a cell phone to shout into at dramatic moments. And that’s wonderful. This is spy stuff as it really is, or at least was, probably—not James Bond, but meetings, memos and the tiniest turn of a head or ambiguous glance across a crowded room. It’s, God help us, romantic—a vision of the Cold War, when megatons of nuclear death had itchy ideological trigger fingers on them, as better than today. Or at least more comprehensible.

Right, so: There’s a mole inside British intelligence, it seems, back in the days when the British Empire was clinging to being a thing that mattered. Also, someone might be gay, which I bet wasn’t in le Carré because even fiction of the day wouldn’t touch that. But it’s all the unspoken secrets that make the men here—the spies are all men; women are all but absent from this world—so much more vulnerable, their positions so much more precarious. A tiny turn of the head can turn into a wild-eyed deer-in-headlights portrait of terror in an instant, and does. The pasty white guys who ruled the world back then were not as bland as they appeared, the world not so beige as the carefully composed and colored cinematography suggests we remember. The subtle suspense here isn’t just intellectual, but emotional, as well.

It’s all plummy British accents and one of the most to-die-for casts in recent memory: Hurt; Strong; Gary Oldman in an amazing turn as Smiley, the retired spy called back to find the mole; deliciously reliable old hands Colin Firth and Ciarán Hinds; the wonderful Toby Jones; the toe-curlingly talented up-and-comer Benedict Cumberbatch, with his sensitive and expressive face; Tom Hardy, who is going to be huge, with his bedroom eyes and his formidable presence. The mole could be any of them. It could be all of them, playing their own individual clandestine chess games.

And even after we learn who it is, I couldn’t shake the feeling that it still could be all of them, because the languid air of acceptance that hangs over it all says that moles and turncoats and suspicion and mistrust aren’t distractions from the game. They are the game, and removing one player doesn’t end the game. No modern spy movie that I can recall has better created a sense of the fruitlessness of its own protagonists’ actions. If they all stopped playing, they could all stop playing.