Tip of the Top Hat 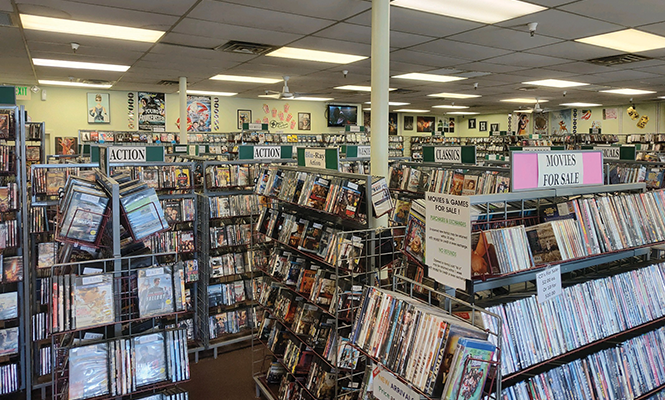 Since I'm a lifelong Davis County resident and avid film lover, the announcement of Top Hat Video's closure was quite devastating to me. Having been born in the late 1990s, I was in the somewhat unique position to be among the last of a generation who got to experience what it was like to grow up with a video store being a major part of the local community, but I was in the very unique position of having that experience last all the way up into my early twenties, in the Year of our Lord 2022.

Now, however, an era is ending. Top Hat Video—apparently the last remaining video store in the state of Utah—is set to close its doors after 40 years of operation.Known as Adventureland Video for its first few years of existence, Top Hat opened in its original location at the now-defunct Five Points Mall in Bountiful in 1983. Back in the '80s and '90s, Top Hat Video was just one of many locally-owned and -operated video stores in Davis County like 3D Video, Cosmos Video and Video Express that competed alongside the bigger chains like Hollywood Video and what many independent video store owners considered to be public enemy No. 1, Blockbuster.

Many of these stores would come and go over the years, and by the early 2010s, they were pretty much all but distant memories—except for Top Hat Video, which, despite the ever-changing climate of the movie rental/viewing experience, was able to keep the lights on. Until now.

"We would love to stay open forever, even while losing money—which we have done almost every week for the last couple of years," said Melissa Handley, co-owner of Top Hat. "We bought the store a couple of years ago when Lee and Lona Earl, the original owners were looking at closing up shop if they couldn't find a buyer. Our son was working there, and really loved the atmosphere and his co-workers. When he told us it might shut down, we decided to buy it and give it a go."

When I was kid, hopping on my bike and riding to Top Hat with some friends was just as much fun as actually watching a movie. But the reality now is that it has just become too easy for people to stream almost anything they want, without ever having to get off of the couch.

While this is convenient, it lessens the film viewing experience in a major way, taking what was essentially an event/outing and turning it into just more random "content" to scroll through on Netflix. The process of loading the family up into the station wagon and choosing a movie together was just as much a part of the experience as the film itself.

I love physical media, and places like Top Hat were important for film preservation. The store has a library of about 35,000 titles.Yes, you can get a lot of them from an online service, but many of them are not available for streaming anywhere.Some of these titles will fade away and become literally unwatchable, similar to how many of the great silent films were lost forever to the relentless brutality of time. That is real loss, not hypothetical.

The critical human element of the video-store experience will also be deeply missed. Unlike with streaming, where an algorithm just spits out what it thinks "you may enjoy,"the video store provided a cultivated space where we could meet and form relationships with like-minded individuals who could truly get a sense of our movie taste. It was a much-desired outlet for people like myself to go and talk about what they thought of that week's newest releases, or to debate who is better between Kubrick and Kurosawa? (It's Kubrick, by the way.)

"Certain clerks just know my style, and always have great recommendations that are right in line with my eclectic taste," says Jeff Wadsworth, a customer of Top Hat for over 20 years."I'll be really sad to turn that over to some algorithm on Netflix, but I guess that's where we're all headed."

All of this is what we are losing with the closing of Top Hat Video.

Shanna Earl, the store manager at Top Hat for 27 years, is also the daughter-in-law of original owners Lee and Lona Earl."Although we knew this day would eventually come, it is still very sad," Earl said. "I will miss the employees, customers, and day-to-day interactions so much.It's been such a special experience getting to work with my daughter Matti, for essentially her entire life, along with many other family members, and friends who have become just like family to me."

I invite/implore you to take a trip—literally "while supplies last"—to Bountiful, as Top hat will start selling off its inventory on Black Friday. Purchase a well-loved copy of one of your favorite films, or just peruse the aisles, smell the popcorn and remember the "good old days" while you still can.