Learn from pros to improve 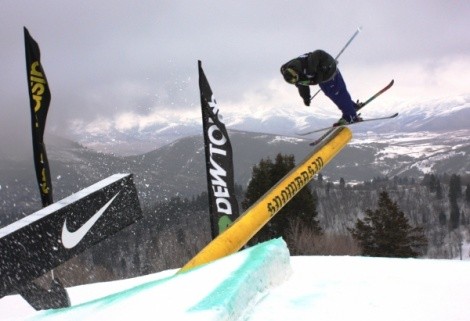 Every snowrider has to start small and work up to big. Who better to learn from than the Dew Tour champions of halfpipe and slopestyle? But before getting to the tips from the Dew elites and the Free Flow Tour up-and-comers, a quick look behind the scenes:

The Dew 'Village' was Snowbasin's largest yet, with many more exhibitors, and with sponsors offering an amazing array of freebies. One much sought-after freebie was the chance to pose with the Dew Cup. Even two of the Village workers wanted a of shot of them holding the coveted Cup. Here it is, dudes!

Mountain Dew, a major sponsor of the Dew Tour, had an environmentally based booth where they handed out free t-shirts of a soft fabric made from recycled soda bottles. People could also choose from nearly a dozen different designs to have one pressed onto their shirt. South Ogden's Kelvin Holden, 11, chose a tie.

The Pantech booth was by far the most generous, hoping to spread the word about the Pantech cell phone made by AT&T. They also gave out free packs of handwarmers, lens cloths to clean phone screens, and free 'design it yourself' sunglasses. A table with frames in various colors, with different colored lenses and ear pieces allowed everyone to select a customized choice, which was then assembled by the attendent.

The skies were dark grey, and the light dangerously flat, but Snowbasin showed its usual Olympic level flair with a perfect halfpipe and slopestyle course, well marked with bright green so athletes could see every edge, despite frequent limited visibility. The 22-foot high pipe was the longest ever built for competition at 615 feet, which gave skiers and snowboarders enough length for an extra trick or two.

A problem for superpipe snowboarders was the near-simultaneous Snowboard World Championships in Oslo, Norway. They began the second day of the Dew Tour. This led to some semi-hilarious moments for Gretchen Bleiler. Immediately after the run that gave her second place to Kelly Clark in women's superpipe, the snowboard star and her husband jammed down the hill and ran to their car in the parking lot, not even waiting for awards. Their flight to Norway was leaving in less than two hours; international flights require an early check-in, they were in Huntsville, and still had to return the rental car.

With no time to change clothes privately, Gretchen and her husband ducked between cars, giggling, to change (nice striped tights, Gretchen). Gear and snow clothes were frantically shoved into waiting luggage. Bleiler, still laughing, got into the car, saying "This is the amazing race."

They made the flight. Gretchen qualified first in her heat in the women's halfpipe quarter finals less than 24 hours later. But Kelly Clark, who also made the amazing race to the airport, came from behind once again to take the win; dumping Bleiler to third place. Clark won every event she entered this season, and is now the 2012 women's halfpipe World Champion.  For full World Championship results, go to: http://www.wsc2012.com/results/#

The slopestyle course was unusually short. It offered two options for each feature. Skier or snowboarder, male or female, those who wanted winning points had to choose the most difficult rail. Now that slopestyle is an Olympic sport, everyone's stepping it up. Once impossible tricks that could only be done by Shaun White have now become routine, almost necessary, elements. A cab double cork 1080 (two diagonal flips done off center, while spinning at the same time) once guaranteed a win. Now the trick is barely good enough to make the finals.

Slopestyle athletes had to choose a feature right out of the start. Naturally, nearly everyone took the more difficult rail on the left, but having to get air so quickly out of the start to nail the rail caused quite a few epic fails, especially for snowboarders.

As the slopestyle finals went on, more weather rolled in. Visibility got worse for the athletes, with no sun and flat light. They just had to go for it and take whatever the hill handed them.

It was hard to see the course. Imagine trying to do tricks, going for speed and air, when visibility is this bad!

The women, who are now paid as much as the men and can enter the slopestyle comp at each Dew Tour stop, are stepping it up with bigger tricks and higher airs, preparing for the Olympic debut of slopestyle in the Sochi 2014 Olympics. At Snowbasin's ski slopestyle podium, they chortled as they sprayed each other---and some of the audience---with champagne. Left to right, Anna Segal, 2nd; Kaya Turski, 1st; Devon Logan, 3rd. Logan also won the women's ski Superpipe and the first ever Dew Cup for women's ski halfpipe.

Prize money for everyone gets bigger every year. Here,Tyler-the-money-man hands Rebecca Torr her check. She said, "I'm mad at myself. It's the first time I didn't make the finals." But hey, Rebecca, you still got paid!

Tom Wallisch, who lives just down the street from Alex Schlopy in Park City, was the happiest man alive at the end, even though he came in second. But he won the other two Dew stops, and was given the Toyota Athlete Of the Year award (and the cash that goes with it), as well as the Dew Cup for being the 2012 men's Freeski Dew Tour champion. "This is so awesome! I'm just so happy," he said.

Now to the tips:

This one's for beginning snowriders just learning to get air; from New Zealand's top slopestyle snowboarder Rebecca Torr: "“If you’re doing a jump, don’t forget to bend your knees, you can’t land with a straight leg. You definitely need to learn to pop if you’re hitting jumps. To do that, stay small (crouch) as you’re riding the upside of the jump, then at the top you extend forcefully and then bring your knees up while you’re in the air. The smaller your center of gravity is, the better your balance is."

Snowboarder Armeen Pirooz, whose slopestyle wins on the Free Flow Tour got him a wildcard entry into the Dew, also has advice for snowboarders who want more air. "To get more of a pop, use a stiffer board and jump really hard right at the lip of the take off. Keep your legs stiff, but bent when you come into it, so the jump doesn’t shoot you. You jump with your whole body," he says.

Maggie Leon, 14, is kicking butt on the Free Flow tour, which is basically the comp for juniors who want to work their way up to Dew Tour level. She advises perfecting tricks on a trampoline before trying them on snow. "If you’re going to try something like spinning, try to get it dialed down on a trampoline, then once you try it on snow, it’ll come a lot easier. You can even try it in a foam pit first. They have those in a lot of places, like in gymnastic training centers."

But never think of slopestyle as 'power gymnastics,' says Tom Wallisch, who this season has won slopestyle gold at the X Games, plus two Dew Tour stops, as well as the prestigious Dew Cup at Snowbasin. "There’s no power in slopestyle, me and Nick (Goepper, who won men's ski slopestyle) are probably the scrawniest kids out here. You don’t need to be big, you don’t need to be strong, you just need to be good at skiing, and that comes with practice and time on the hill. Think of this as something like skateboarding, where the littlest kid can be the most talented."

Alex Schlopy, last year's ski slopestyle champion who won the Dew, the World Championships and Big Air gold at the X Games, had to sit this one out. He just had surgery for torn knee cartilage he got at the X Games and has this advice for injured snowriders: "As far as getting an injury, it's just something that happens, it happens to everyone at some point. Don't get too down on it. Take the time that you have off and embrace it and not really think of the bad thing that happened. For me, I'm just thinking about how I'm going to come back stronger, and concentrating on that."

Schlopy will be back on skis by the end of this week. Isn't modern medicine incredible!