The recent XTERRA off-road triathlon proved how grueling a race can be, with a near-mile swim in Pineview Reservoir, at an altitude nearly 5,000 feet (trying to stay on course through the thrashing crowd, dodging head kicks), then removing wetsuits for the mountain-bike transition (a 17.7 mile, heavily switchbacked stage rising 3,400 feet over a mountain trail to Snowbasin resort) and a steep, more than six-mile run up the mountain and back down to the finish.

The star of the race was Lance Armstrong, originally a triathlete before moving to cycling only. It was his first “tri” in more than 20 years, yet he still came in fifth—a stunning result for the 40-year-old.

Off-road triathlons are far more difficult than road triathlons. That may be one reason this relatively new discipline is now exploding in popularity. According to Sporting Goods Manufacturers Association statistics, participation in off-road triathlons grew nearly 38 percent just between 2007 and 2009, and USA Triathlon’s annual membership has reached an all-time high. Yet most participants started out as road triathletes, so they’re familiar with both worlds. Whether pros or just finishers, they’ve all learned a lot. Here are some of their best tips:

Men’s winner Nicolas (Nico) Lebrun of France found himself coming up quick on perennial winner Conrad Stoltz (South Africa) in the bike stage, “so I could pace myself and not do too much, because if you push too much, you can really crash on the next part,” he said.

Like most pros, Lebrun trains about 30 hours a week, explaining that, for a triathlete, “To win a race, it’s not only training. You have to think about the technique of your run, your bike, your swim. You have to work on your head, your food. It’s a whole life.”

Colorado’s Brad Zoller, who finished in ninth place, warns, “Never try anything new on race day. I once tried brand-new clipless pedals in a road race and couldn’t get my feet in the pedals, so I crashed right out of the transition.”

Speaking of transitions, they’re more important than most athletes realize. A minute or more can be lost just getting out of a wetsuit. San Diego’s Lesley Paterson, who took second place for women, said, “You have to treat it like a dance, with a sequence of things that you do—one, two, three, four. I get out of the water, pull my cord, get my arms down, get to my bike, pull [the wetsuit] down to my waist, stamp on my feet. As I stamp on my feet to get the bottom half off, I’m putting on my helmet. … So it’s a specific sequence, and the more you practice that sequence, the better you’ll get.”

Men’s sixth-place pro Branden Rakita (Colorado Springs, Colo.), who came in less than a second behind Armstrong, found that a very good tip is to be aware of how the course has changed from practice day to race day. He did a trial run three days before the race, but found that the bike course had loosened up a lot by race day with everyone practicing on it—“So you really had to stay on your game in the corners,” he says. He also advises, “Stay steady. You don’t want to get into the redline too quickly, especially at elevation. If you spike your heart rate, it takes too long to recover and get it back down.”

Armstrong (Austin, Texas), who knows his strengths better than most athletes, fell back during the bike stage. “I felt like I could have kept pushing, but I knew I had to [do the] run. At that point, I knew I wasn’t going to go for the win, so it’s better just to ride tempo (a challenging, but manageable pace), and hope that I survived.” Which means, if you’re not going for the win, keep up a pace that will allow you to finish.

Women’s winner Melanie McQuaid of Victoria, Canada, advises getting a coach. “Having a good coach makes a difference. Some people can figure it out on their own, but a coach who understands the sport might be able to get you from point A to point B a bit quicker. And experience helps; you have to race a lot. You have to practice and do triathlons to be a triathlete,” she says. 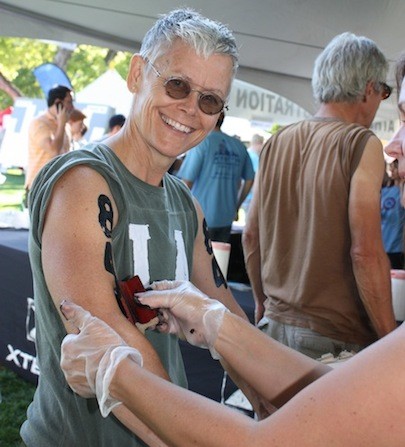