To Write a Wrong

On April 21, 2014, convicted Tongan Crip gang member Siale Angilau began his federal racketeering trial by lunging at a witness testifying against him. He was armed with a pen. He was stopped in his tracks by four bullets fired by a deputy U.S. marshal. Twenty-five-year-old Angilau later succumbed to these wounds. Within hours, his name took on a life of its own, garnering the typical breathless, frantically breaking coverage from local TV and print media, as well as from outlets such as CNN and even England's Daily Mail.

Locally, one daily newspaper initially identified Angilau as "a get for law enforcement"—essentially a prime arrest for the good guys. Another account quoted a witness to the shooting—and a family relation to one of Angilau's robbery victims—who told reporters that his being shot in front of his mother was a sad turn of events, but "obviously, he has no heart." Another local publication noted Angilau's tragic turn from an all-region football player at East High School in 2005 to an incarcerated gang member a few years later. That article quoted a woman set to testify about how, in 2002, a then-14-year-old Angilau punched her in the face while stealing cigarettes from a 7-Eleven. The woman's epitaph of Angilau, the teenage career criminal, was simple: "He wasn't going to change. He just got worse."

On Salt Lake City's west side, the close-knit and insular Polynesian community lives in a tradition born of the islands. But here in the Rocky Mountains, many live on a cultural island, seemingly apart from others. They revere their elders, the law and the law enforcers. When a youth breaks the law, it brings shame on the elders and silence from loved ones. Shame casts young people away from church, family and friends and into a kind of exile.

Angilau had already been behind bars for seven years, having pleaded guilty to robbery and assault charges in state court, under the impression that he would not be federally charged for the same crimes. During that time, Angilau refused to see visitors and returned letters and packages from family members. In the rare times he talked to family, he told them he just didn't want them to become sad, thinking about him locked up.

The first time in years many of his family members had seen him was the day he was shot and killed.

Angilau's death—and the reaction to it—is what prompted his sister Tolina Tausinga, along with others, to form the Raise Your Pen Coalition. To Tausinga and other coalition founders, the group's work—to provide a voice for disenfranchised Pacific Islanders—is very personal, in that they refuse to let others write off her brother's legacy simply as that of a violent gangster.

She remembers the brother who got into trouble, made serious mistakes when he was a teenager and deserved an appropriate punishment for those crimes. But she also clings to the memory of her protective little brother—the one with an old soul who acted like the eldest child. The one who made her laugh when, one moment, he would be carrying her kids around like footballs and the next moment would be calling on his siblings to help their parents clean their house. The brother who every Sunday brought groceries to the grandparents of a friend on the street who lived by themselves, and even mowed their lawn.

"He just had a solid heart," Tausinga says.

He was the brother who laughed and played Wrestlemania with his brothers as a kid, and made his sisters scrunch their faces in disgust when he would eat his peanut-butter & jelly sandwiches with ramen noodles. He was the brother who chewed his siblings out for smoking, drinking or sneaking out to parties and who would make certain his friends never used bad language around his sister.

He was the brother they remember who, before his incarceration at 18, desperately wanted his younger brother to not make the same mistakes he had.

In this era of seemingly never-ending police shootings, it is not uncommon to see communities galvanized along color lines and protests organized among citizens who disproportionately find themselves in the crosshairs of police-issued firearms. That phenomenon, however, was relatively unknown to Pacific Islander youth in Utah—until Angilau's death. Right or wrong, his example has now ignited a first in Utah: a Pacific Islander youth-advocacy group challenging the "school-to-prison pipeline" and educating community members about their rights when it comes to the law and those tasked with enforcing it.

The group has clamored for more information about Angilau's death—hoping to legally challenge the federal government's refusal to release video footage of the courtroom incident—but they've also held peaceful marches and contributed to food drives. In May, the coalition will be honored by the American Civil Liberties Union of Utah for community organizing. But, even as they organize, they still mourn. And they still await the sentencing of Siale's younger brother, Villisoni, who will be sentenced in May—on the same day as the ACLU award ceremony—after pleading guilty to a gang-related manslaughter.

The Raise Your Pen coalition struggles for recognition, even among some of the conservative elders in the Pacific Islander community who still aren't completely onboard with the group. One of the organizers' biggest challenges is making sure their message remains positive despite the negatives stacked up against them.

"It's hard to push and want to bring positive change when there is so much pain everywhere," Tausinga says. "But at the same time, that's where all the passion and the love come from. We don't want to see anyone else's kids or the young men in Glendale—or any community, for that matter—follow through with what society has already labeled them as. It's not OK."

For Tausinga, her brother's death provided a visceral and very rude awakening about the need to bring her community together.

"I wasn't living life until after they took my brother's," she says.

Good From the Hood

While the west side is a place Tausinga is proud to call home, it's also a place haunted by the ghosts of brothers gone—either incarcerated or killed.

"It's like a slideshow in my mind," Tausinga says. "When I think of all the streets and blocks of Glendale, it's like Memory Lane, but its also like a cemetery."

Tausinga's friend was shot dead on California Avenue; others were taken from the neighborhood and incarcerated at the Point of the Mountain and in federal lockups far from Utah. A brother of another coalition member, who had been swept up in racketeering charges, was serving time in a Virginia federal penitentiary when he was stabbed to death by another inmate in 2010. To this day, the family doesn't know why or how it happened.

For Tausinga, death, incarceration and crime have for too long been just a shockingly "normal" way of life in her neighborhood. Kids grew up in homes where parents juggled two or more jobs, and the kids wound up on the streets. They engaged in the kinds of petty crimes their older brothers did, such as "beer runs"—convenience-store robberies for which, in 2010, the U.S. Attorney's Office brought down federal racketeering charges on 16 members of the Tongan Crips gang, including Angilau.

Tausinga fatalistically accepted the way of life the young men in her family and on her street lived. She didn't condone it; it was just how things were. She now sees that her community has contracted this fatalism as a kind of sickness, swallowing the stereotypes forced on it by society and the media.

"We were never looked at, except for being frowned upon," Tausinga says. The stereotype of the Tongan gangster from Glendale was so persistent, she says, it effectively brainwashed entire generations of her community.

"Why try if you've already told me I'm not going to be anybody but a gang member and a danger to society?" Tausinga says. It's a question that she has to deal with on a day-to-day basis in her current gang-prevention work with neighborhood youth. Her answer now is clear, wrought from the deepest pain over the loss of her brother.

"You are so much more—your talents do matter, don't let the label define who you are," Tausinga says. "But before my brother was taken, I don't think I would have been in that mindframe or that type of thinking."

Tausinga still carries the grief with her wherever she goes. When she first met a City Weekly reporter, she was clad all in black, as a sign of mourning. Her expression flitted from exuberant and joyful when she laughed about a good Siale story, to countenancing a sudden grief and a thousand-yard stare in remembering the loss that's driven her and the coalition over the past year.

After Angilau's death, she says, she was gripped by hate, fear and anxiety. The sight of any kind of a police officer made her sick. Even the sight of a police car could give her a panic attack—and, after her brother's death, there were plenty of police cars around.

In Tongan tradition, a funeral is such a moment of communal solidarity that the ceremony can last up to two weeks, during which time family and friends come to visit the family and bring gifts. In turn, the family feeds all those who come to pay their respects. For a week, the block surrounding the Angilau home was lined with funeral attendee's cars—and, for that week, marked and unmarked police cars hovered close-by with officers stopping attendees on the street asking what they were up to, Tausinga says.

"I felt like they were taunting us," says Dee Ann Tuakalua, another founding member of Raise Your Pen, whose brother John Tuakalau was also indicted as part of the racketeering charges against the Tongan Crips.

The coalition started within a month of the shooting, and its first event was a peaceful march and a vigil on the steps of the federal courthouse. It was a successful first event for the newly formed coalition, but even then, members had to struggle with the challenges of community organizing. For Tuakalau, the members had to be cautious about who spoke to the media for the group's first event, when emotions ran so strong they didn't want to show up on the news as just a bunch of angry islanders.

"We wanted to say how we felt, but at the same time, we didn't want to be portrayed as angry monsters," Tuakalau says.

Luckily, the group gained traction with a number of allies, including NeighborWorks Salt Lake, a west-side community-development and advocacy organization that hosted the town-hall meeting that led to the coalition's creation. Since then, the organization even helped send coalition members to a conference with other nonprofit advocacy organizations in Cincinnati. 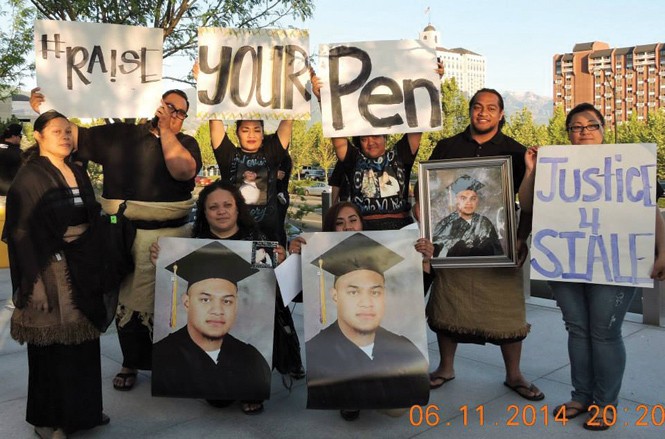 The group has since learned the ins and outs of holding meetings, keeping minutes and building bridges with other groups. Since the beginning, its focus has been both on preventing community members from being ground under the wheels of the criminal-justice system and on raising awareness about how those wheels of justice ran over their family members.

Coalition members have never denied that their family members were involved in crimes worthy of punishment, but they questioned the political motivations that came with labelling the Tongan Crip gang as an organized criminal enterprise worthy of being charged with racketeering.

Like others, Angilau pleaded guilty to state charges in 2009 after U.S. marshals recommended that no federal charges be filed. A year later, however, Salt Lake District Attorney Lohra Miller joined the FBI in announcing new racketeering indictments against Angilau and 16 other TCG members. In a defiant press conference, Miller applauded the new charges, saying they had effectively "cut the head off the snake."