Sara Zarr's Goodbye from Nowhere shares a story of big family gatherings into an isolated world.

There's a bit of an irony to releasing a novel centered around big, rambunctious family gatherings in a time of social distancing. Then again, there's virtually nothing about this time that feels normal, including for authors trying to get their books out into the world.

Goodbye from Nowhere—the new novel from Utah author and National Book Award finalist Sara Zarr (The Story of a Girl)—centers on Kyle Baker, a California teenager whose life and relationships are thrown into chaos when he learns that his mother has been having an affair with a married man. The events play out over the course of a year, with several key sequences involving holiday and summer family reunions at the Northern California farm owned by Kyle's grandparents.

Zarr traces the origins of the story back to a writer's retreat several years ago, and a conversation with another writer about that writer's family history. "She's like a younger, cool grandma ... and she said something about 'cousin camp' with the grandkids every summer," Zarr says. "I just thought, that would be a fun setting for a kids' book, about cousins get together on their grandma's farm. But because I'm me, I then though, what if it's teens, and one of their parents is going through a divorce. She said, 'Wow, that escalated quickly.'"

After the relatively intimate setting of her previous novel, Gem & Dixie, Zarr adds, "I was really wanting to stretch my arms a little bit and imagine a big cast of characters, a big family. I've always loved those kinds of multigenerational big family stories. Initially, my first draft was basically from all nine cousins' points of view. And you could just never get anywhere, because it was just ... a lot." 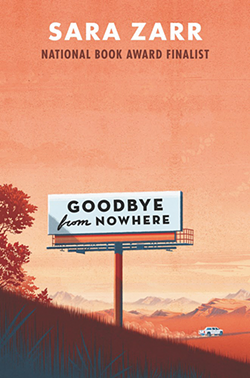 With help from her editor, she came to focus on Kyle—which provided the unique challenge to Zarr of writing her first male main character. Goodbye from Nowhere also features an asexual/aromantic character—Kyle's cousin Emily, who is also his closest friend—which offered another challenge of crafting a character with an identity not typically represented in young-adult literature. "I get why it can be problematic, especially for authors with white privilege to feel like they can coopt every single narrative that exists," she says. "I think I would have felt [pressure] if it was [Emily's] point of view, or primarily inside her head. Kyle is perceiving everything only insomuch as it relates to his needs and his experience. ... That's the arc of this story: Kyle moving from centering his life on his own direct experiences to realizing there's a lot of context to other people's lives."

That emotional awakening is central to most of Zarr's work, and the key to what attracts her to young-adult fiction as a genre. "Coming-of-age stories are so much like the Adam and Eve story: You're sort of innocent in this world, where everything is given to you, and there's this benevolent being meeting your needs," she says. "Then you eat of the Tree of Knowledge and it's like, 'Oh my God.' ... That's a problem we have not just in adolescence, but into adulthood. That's always what the arc is: moving from some sort of innocence to some sort of knowledge, and what do you do then. How do you go forward with your new knowledge?"

The new knowledge of this moment is that few of the old models apply, especially when it comes to something like promoting a new book. Zarr notes that she had done a book-release event at The King's English Bookshop for all of her previous novels, but it soon became clear that such an event wouldn't be possible. "I initially felt a lot of personal energy around, 'I'll do some Facebook Live and live Twitter chats,'" she says, "then quickly all the other authors started doing the same thing. I'd go to other people's chats and see seven or eight people there. It felt like grasping at something to make you feel in control, but in reality, it wasn't going to save your book's sales figures."

That world has changed, but Zarr acknowledges that for a full-time writer, the world has changed a bit less than it has for most. "Personally, I like a lot of time alone," she says. "I am an introvert, I've been working at home for 10 or 12 years. So I haven't been dealing with any extra 'how do I structure my time?' problems. I've actually had those problems the whole time.

"What I feel is missing is going to coffee shops and libraries, and writing there, or just getting out of the house. I miss being alone in a public place."