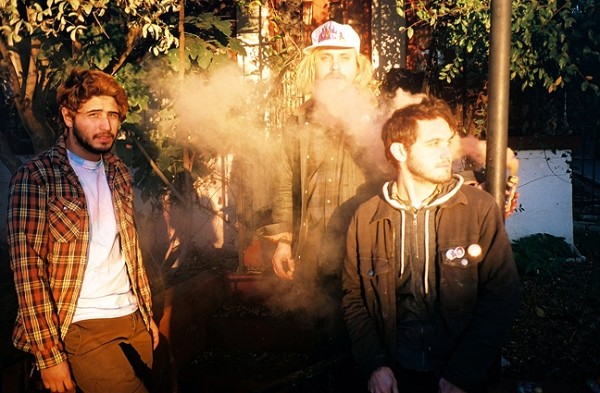 In today’s terrain of MP3s, M4As, FLACs and other digitized audio formats, the album cover just doesn’t possess the aesthetic power or punch it once had. But that doesn’t mean there aren’t fine pieces of cover art rolling out today.

The surreal, unsettling painting used for Badillac—the recently released third full-length from Los Angeles trio Together Pangea—is a sterling example. On Badillac’s cover, the face of a freakish insect/alien entity awkwardly protrudes from a man’s body. The beast stands next to a disinterested woman, digging its creepy little teeth into her hand.

Together Pangea bassist Danny Bengston describes the picture as “this beautiful, complacent woman who’s content with this devilish succubus of a man-creature.”

It’s a striking Penelope Gazin painting that, as Bengston notes, the band used for Badillac partially because they simply enjoyed the original visual so much, and partially because it shared a vibe with the record. “A lot of the lyric themes on the record hearken to the imagery on the cover,” Bengston, 25, says, immediately bringing up Badillac tracks like “Offer” and “Make Myself True.”

Considering their fundamental school of sound, this kind of gloomy self-reflection isn’t what you’d necessarily expect from these guys. They make squealing, raucous rock & roll, and that energy makes it easy for them to score shows in dive bars and basements. But on the lyrical front, there’s a palpable sadness to Badillac, especially as Keegan has a knack for sounding both smug and hopeless when he delivers lines like, “Does he really care about you? Is he really on your side?” And the title track itself is a memorably on-point piece of profoundly bummed-out ’50s pop dressed in garage-rock clothing. There’s something subversive about Badillac in how it allows Together Pangea to appear gleeful and free, yet the deeper you dig into their work, a greater emotional heft is revealed.

The project hasn’t always sounded this way. Sometime around 2001, a teenaged Keegan began using Pangea (the “Together” would be added later for legal reasons) as a catch-all for songs he put together by himself on a 4-track tape machine. As Bengston describes, that incarnation of Pangea was more akin to indie folk, with its aesthetic wearing the influence of K Records outfits like Little Wings and the Microphones, and emphasizing “really low-key acoustic guitar, sort of eclectic instrumentation.”

As more players joined Keegan and came and went along the way, Pangea’s sound was tweaked until it became the foundation for the trio today. Bengston started jamming with Keegan circa 2005, and the inclusion of drummer Erik Jimenez meant the arrival of the last crucial piece of the Pangea puzzle. Jelly Jam—the outfit’s 2010 full-length debut—marked the outfit officially turning toward rock & roll.

“It’s a lot more fun when you’re playing places like CalArts and house parties,” Bengston says, referencing the California university crucial to Together Pangea’s formation, “to go to a show and dance around and mosh around than it is to sit around in a circle [singing] sappy folk tunes.”

Badillac’s release on Harvest Records (a branch of Universal Music Group) denotes the band’s major-label arrival; it’s a sign that Together Pangea’s star is on the rise. In reflecting on his early days of playing with Keegan, Bengston points out that things have changed “an awful lot.”

“There was a time where I could die happy if we played a show at the Smell,” a crucial contemporary punk and indie-rock venue in Los Angeles, he says. “The other night, we did our record-release show there and we sold out insanely quickly. Back then, we didn’t expect anything of any of this. We just wanted to keep playing music for our friends.”