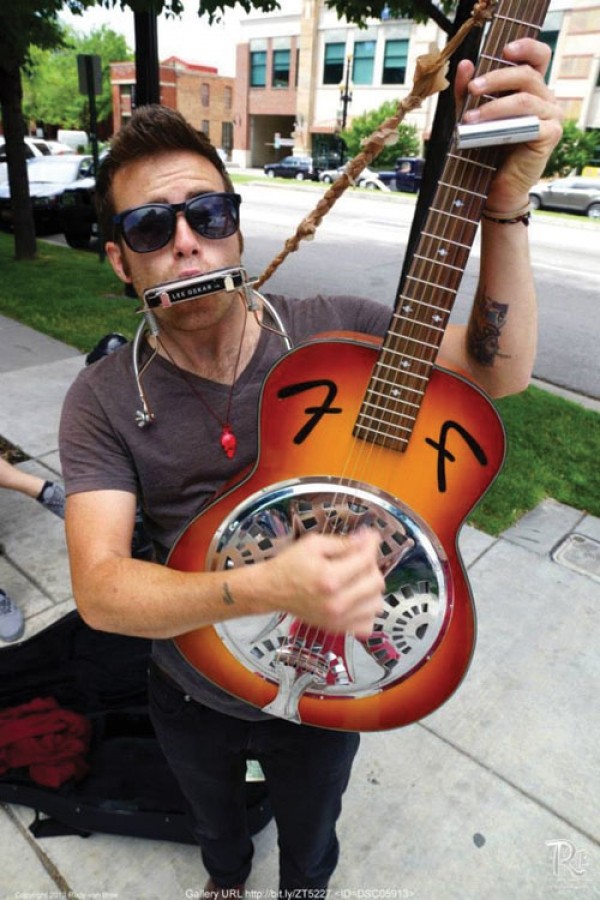 Sweet Salt Records founder Tom Bennett had music in his blood all along—he just didn’t know it. In April, his grandmother told Bennett that his great-grandfather, Roy Ferguson, had been a folk singer who made a one-time appearance at the Grand Ole Opry. The night of his final performance, she said, he died in a Holiday Inn parking lot at age 53.

Coincidentally, just before Bennett received the news about his great-grandfather, he’d begun learning how to play acoustic guitar, exploring “the resonators, slide, Delta blues [and] folky style of playing, the music I grew up with,” he says. Playing guitar became a way to explore his own musical abilities as well as to connect with his great-grandfather’s legacy.

But merely playing the same instrument and styles that Ferguson had wasn’t enough, so in June, Bennett journeyed to his home state of Georgia (he originally came to Utah as an LDS missionary). His quest was to find people who remembered his great- grandfather or had stories to tell about him, or “track down maybe recordings or a guitar of my great-grandfather’s,” he says.

“I wanted to know more because I’d never heard about him growing up, which shocked me because our family’s pretty close and very, very small,” Bennett says.

In Cedartown, in northern Georgia, Bennett met an 86-year-old man named C.R. Martin, who had not only known Ferguson, but was related to him through marriage and remembered the songs he used to play, which were mostly covers of “Hank Williams songs and old gospel standards,” Bennett says.

And Martin held another key to Ferguson’s lost past. “He said, ‘Before you go, let me give you a gift, because I can tell you really mean it. And you’d do better than an 86-year-old man having what I’m about to give you,’ ” Bennett says. “He went up to his attic and he came back about 30 minutes later with an old, dusty Walmart bag, and inside was a very destroyed 8-track tape, and he said, ‘This is the only recording I’m aware of of your great-grandfather.’ ”

Thrilled with the find, Bennett returned to Utah and enlisted the help of a musician friend to painstakingly restore the tape inch by inch. “We were able to get a handful of songs off it,” Bennett says.

Bennett continued to play acoustic guitar, and would often play in Pioneer Park with homeless folks. His music caught the attention of several employees of the nearby historical Peery Hotel, who invited him to come play there. He gathered a few other musician friends to perform with, and eventually they “were able to form a little folk-music scene around that,” Bennett says.

Inspired by the talent of his fellow folk musicians, it was then that Bennett realized that his long-held dream of starting a record label could become a reality. He founded Sweet Salt Records in November, and moved the growing folk-music event—now called a Good Ole Time—to Zest Kitchen & Bar (275 S. 200 West), where it happens every Wednesday from 7 to 9 p.m.

Currently, the folk-centric record label represents a troupe of about 10 solo singer-songwriters. Artists from Sweet Salt Records also play regular showcases at Piper Down, The Garage and Bar Deluxe, and a weekly showcase at Metro Bar will start at the beginning of January. On Dec. 17, Bennett released his three-song debut EP, The Man Who Shook the Trail of the Devil’s Hounds.

But perhaps the most exciting development is the venue Bennett plans to open in the spring, on 300 South next to the Tavernacle. “We just basically want to create a place where people can come—once the sun comes back out—sit on the sidewalk, drink coffee, smoke cigarettes, write poetry [and] listen to folk music,” he says.

Sweet Salt Records might be new, but, rooted in the same grit and soul as its founder, it has the potential to become a Salt Lake City folk-music mainstay.