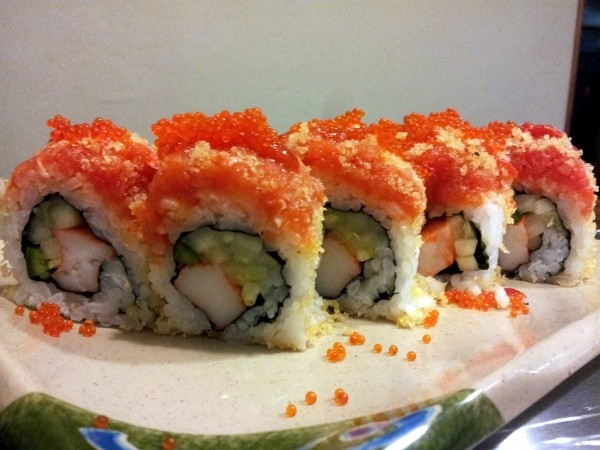 Well, here’s one more, and it’s well worth a visit to Layton’s south end. Located on the lower part of Layton’s beleaguered Main Street, Tony’s Grill & Sushi Bar occupies the space previously occupied by Taco Taco, which was followed by Mara’s Mexican Cafe. Gone is the dark and claustrophobic feel of those Mexican eateries. The place has been given a thorough facelift, and is now open, modern, airy and inviting. There’s a small sushi bar in the rear of the restaurant, and table and booths in the main dining room. A saltwater tank with fresh shellfish tempts lobster lovers, and splashes of color throughout lend a bright liveliness to Tony’s.

I had avoided Tony’s for quite a while, since the main draw seemed to be the “all-you-can-eat sushi.” I’ve not had the best experiences in all-you-can-eat sushi joints—in fact, quite the contrary. However, perusing the various Tony’s menus online, I came to understand that all-you-can-eat sushi wasn’t the only option. There is Ã  la carte sushi and sashimi, along with bento boxes, teriyaki, ramen and a better-than-ordinary selection of appetizers—things like tempura basil shrimp, fried soft-shell crab on vermicelli and salt & pepper calamari. Best of all, prices at Tony’s are ridiculously low vis-Ã -vis comparable Salt Lake City sushi restaurants.

Endless sushi, for example, runs a mere $15 at lunch ($9 for kids 12 and under) and $21 at dinner. That price includes miso soup, tempura vegetables, edamame, crab Rangoon and as much nigiri or sushi as you can handle, including a monster selection of rolls: There are some 50-plus to choose from during dinner, and they’re the same ones you’d order Ã  la carte. Plus, you get 50 percent off premium menu items not included in the endless sushi menu, like sashimi or the chef’s special rolls, as well as drinks and dessert. It’s enough to change my ill will toward all-you-can-eat sushi.

Do an easy economic analysis and you’ll quickly see that Tony’s endless sushi is a damned good bargain. The Galaxy roll (tempura shrimp, mango, cucumber and four types of fish with house sauce), for example, is regularly priced at $11. Just order one of those plus a Sundance roll ($10), with crab, avocado and cucumber inside, topped with salmon, red snapper, lemon, lime and ponzu sauce, and you’re already ahead. And, unlike many all-you-can-eat sushi joints I’ve tried, Tony’s rolls aren’t overloaded with rice. They are normal, albeit generously portioned, rolls. Too many places make rolls that are mostly rice, knowing that rice is cheaper than raw fish and such—hoping to fill you up on starch versus, say, hamachi. So, kudos to Tony’s for treating their customers fairly.

Service at Tony’s is super-friendly, especially a terrific guy named, oddly enough, Tony. There’s another Tony who works behind the sushi bar. One server told me the restaurant was named for the two Tonys; another said, “It’s just a name they made up.” Well, whoever Tony is or isn’t, the service is excellent, drinks are kept topped off with free refills and one server even apologized for charging us a $5 corkage fee when we brought our own bottle of wine to dinner. There’s the standard selection of Japanese sake and beer available, but the wine list is pretty skimpy.

The salt & pepper shrimp appetizer ($9) is very good: a plate of plump, butterflied shrimp traditionally prepared, with the exception of sliced jalapeño toppings to fire things up. Even better, shrimp lovers, is the crystal shrimp ($9), which is tender steamed and butterflied shrimp topped with shredded crab in a peanut-flavored sauce and sprinkled with black sesame seeds.

I’ve already mentioned the all-you-can-eat deals at Tony’s. However, there’s an even more remarkable value on the menu. At either lunch or dinner, Tony’s offers a combination menu for $8. This includes a side salad (iceberg lettuce with sesame-ginger dressing), tempura veggies, two gyoza (pork dumplings), two crab Rangoon, miso soup and a choice of one roll from a selection of 35, which ranges from vegetarian rolls (there are eight) to California, Rainbow, Playboy rolls and beyond. My favorite—and not just because I was dining in Layton—was the Layton roll, which is normally $9.75 if ordered Ã  la carte; I told you the combination menu was a steal. The Layton roll is as gorgeous as it is delicious: rock shrimp wrapped with rice and nori, then topped with slices of salmon, escolar, tuna, white and black sesame seeds, and drizzled with a slightly sweet eel sauce. Outstanding!

Less outstanding is the ramen, a big bowl of nicely cooked ramen noodles in pretty good broth, but with big chunks of broccoli (who puts broccoli in ramen?), fake crab and large slabs of tough, fatty beef that were impossible to eat with chopsticks, even if I’d wanted to. So stick with the rolls at Tony’s, and relish the amazing values.