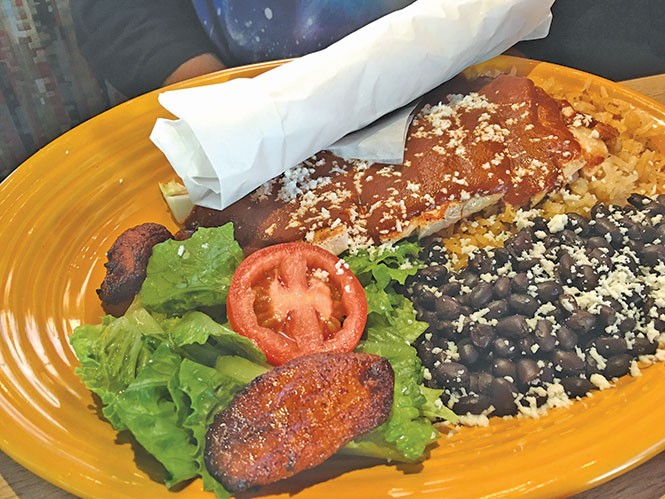 Davis County residents, and those who work, live or spend much time in Layton, probably remember Doug & Emmy's Family Restaurant and Café, named after owners Doug Madsen and Emmy Criddle. Located in what was formerly the Layton Depot train station, the eatery was a magnet for those who loved generous plates of comfort food: Denver omelets, blueberry fritters, huge scones, roast beef and mashed potatoes. But when the Utah Department of Transportation decided to put a FrontRunner station at the bottom of Layton's Main Street, they gave it the boot, claiming eminent domain.

For years the deteriorating building sat empty, forlorn and forgotten. UTA spent a fortune putting in a nice new parking lot a couple of years ago, even as the building itself rotted with smashed windows, and became a prime stop for vandals. It was sad.

Then, earlier this year, a restoration began. And, while many—myself included—don't understand why Doug & Emmy's isn't still thriving, we are happy that the building is no longer an eyesore, but home now to the recently opened Cafe Sabor.

However, this is not the first Cafe Sabor. The original, which opened in 2002, is in Logan's historic Center Street Depot. Additional locations in Idaho Falls and Island Park, Idaho; and Bear Lake, Utah, followed. But don't get the idea that these are chain restaurants. Each is quite unique; there's nothing cookie-cutter about them.

"Sabor" means flavor or taste in Spanish—an apt name for this new establishment, as its dishes are packed with robust flavors. Frankly, that came as a surprise to me.

Now, there isn't much on the menu—even though it serves "Mexican food"—that you'd actually find in Mexico. Chimichangas are an American creation, and dishes like tequila-lime pasta and grilled blackened salmon certainly aren't from south of the border. Nonetheless, the food here is damn good.

Their menu features daily/nightly drink and food specials, like $3 margaritas on Fridays. On my last visit, pints of Wasatch Brewery's Jalapeño Cream Ale were priced at a mere $2 each. Sold! As I sipped my ice-cold beer, our clan dove into a massive "appetizer" of carne asada fries ($10). The foundation of the dish is waffle-cut fries that are topped with gooey melted cheese, crispy nuggets of flame-broiled skirt steak, with pico de gallo, sour cream and fresh guacamole. Bring an army if you have your sights set on actually finishing this dish.

We also enjoyed the contrasting spicy-sweet flavors of blackened shrimp tostadas ($8.50), featuring small Cajun-spiced shrimp atop two crispy tortillas, with fresh pineapple salsa and avocado slices. My wife sipped a "Sabor-Rita" ($6.50). It's one of eight different types of margaritas, ranging from the classic to a jalapeño-cilantro version and a "Bear Lake margarita" with raspberries, Lunazul Blanco tequila, sweet and sour mix and Chambord. There's even drinkable wine available.

As at most Mexican-American eateries, Cafe Sabor offers combination plates with a choice of one, two or three entrées for $6.50, $8.50 and $10.50, respectively. Combos come, also predictably, with rice and beans, or guests can substitute a house salad or cup of soup for $2 extra. Knowing that the combination platters are among the restaurant's most popular menu items, I opted for a taco, enchilada and tamal combo. Now, some of you know that in my opinion, what distinguishes mediocre—or just good—from great in Mexican restaurants is the rice and beans. And I have to admit, both the Mexican-style rice and the creamy refried beans were above average here. That got my attention.

But so did the shredded beef taco. This is not a street-style taco, but it isn't a crispy, crunchy Del Taco-type either. The large, soft, corn tortilla was brimming with juicy, tender, shredded beef that was tastier than anything I've put in my mouth in quite some time. The tamal, too, was delicious: masa stuffed with perfectly seasoned beef picadillo. The chicken enchilada (choices also include cheese, ground beef, shredded beef and sweet pork) I selected to round out my combo was also very satisfying.

Normally, camarones a la diabla is a devilishly spicy dish of shrimp bathed in a fiery chile sauce. At this restaurant, it's not. However, the un-traditional shrimp and mushrooms simmered in a creamy, fairly mild mojo de ajo sauce was quite delectable. It's just not what I expected it to be. A more authentic-tasting dish is the chicken mole ($12), which is grilled boneless chicken in a sweet-and-spicy peanut and chocolate sauce that comes with rice, beans and grilled plantains on the side.

I'd gone here initially expecting to encounter Chili's-like atmosphere and food. But I was pleasantly surprised by the nice (if loud) ambiance, and the photos and art on the walls, and even more surprised by the excellent service. If the food dished up at Cafe Sabor sounds appealing to you, it's easy enough to hop the FrontRunner and disembark at Layton Station for a delicious Mexican-American meal.