Paisley Rekdal uses one event to explore the psychic ripples of violence in The Broken Country. 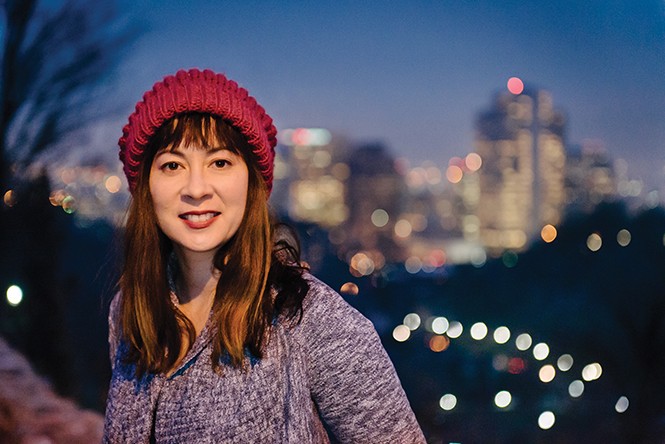 On April 26, 2012, Kiet Thanh Ly—a 34-year-old Vietnamese-born homeless man—attacked several people in the parking lot of a downtown Salt Lake City Smith's Marketplace with a knife, specifically targeting adult white males. For most people, if they thought about the incident at all beyond the day the news broke, this might seem like just another sad story of homelessness and mental illness. Paisley Rekdal wanted to dig deeper.

A faculty member at the University of Utah and the state's current poet laureate, Rekdal turned her fascination with Ly's crime into The Broken Country, a book-length essay that plunges head-first into multiple complex issues: Americans' narrow perspective on the legacy of the Vietnam War; the way individuals and communities process trauma; the immigrant, and particularly refugee immigrant, experience in America; her own identity as biracial, and the confusion of those who don't fit into their environment in a conventional way. The project required her to work outside of her writing comfort zone, doing multiple interviews including some of the victims of Ly's attack and members of the Utah Vietnamese immigrant community (Ly himself was not interviewed as he awaited trial, on advice of counsel). "It was terrifying, and it gave me a huge respect for journalists," Rekdal says. "I found asking people to tell me about their lives—and potentially the most devastating aspects of their lives—very frightening. I would be responsible for that story. I was in a cold sweat coming home from interviews."

Over the course of those interviews, and through accompanying research, Rekdal learned about dynamics both specific to the Vietnamese refugee experience—which varied depending on which "wave" of post-war immigrants an individual was part of—and common to displaced and outcast populations of all kinds. Expectations of assimilation collide with new homes that don't always provide resources to facilitate that assimilation. Then there's the way in which America talks about refugees, which, according to Rekdal, tends to involve polarities. "The first images of post-1975 Vietnamese refugees focused on [non-threatening] women and children," she says. "From a propaganda standpoint, that helps us try to imagine wanting to relocate refugees. The end result, however, is twofold: It places refugees in the space of being needy children, but if they display some agency, they quickly become a threat. They went from children in our imagination to welfare-seekers to violent gang members."

The way history becomes part of a narrative—the stories we start to tell ourselves about the after-effects of a traumatic event like a war—turns into one of the most fascinating subjects of The Broken Country. Rekdal discusses the way American popular consciousness about the Vietnam War has been shaped by Hollywood movies that emphasize the American veteran experience at the expense of the suffering of the Vietnamese people, or how the controversial Vietnam War Memorial in Washington, D.C., frames the story of the war. "There's a paradox at the heart of the way we narrate trauma," Rekdal says. "We want to represent it accurately, but we have to rely on certain tropes to make it interesting and, to a certain extent, emotionally available to the audience. It becomes something between the fictional and the real. ... As we think about the ways we memorialize wars, we think about ways we want to memorialize ourselves in those wars."

While Rekdal spends a majority of The Broken Country trying to understand the perpetrator of the crime—including epigenetic research that suggests how trauma could be passed down to someone of Ly's generation who didn't experience the war first-hand—she's also careful to respect the experience of Tim DeJulis and Keltin Barney, the two victims most severely injured in Ly's attack. Yet she identifies a strange similarity between the implicit expectations of both refugees like Ly, and victims of a crime like DeJulis and Barney: "That event is over, and you should get over it. We like to resign things to history. It speaks to a larger culture of American amnesia. We like to erase things that make us feel uncomfortable."

Ultimately, Rekdal attempts no simple diagnosis of Ly, and has no easy answers for avoiding a similar act of violence in the future. She does address the absence of support services for at-risk individuals and communities. "The biggest thing to blame is the slashing of mental health care budgets, especially around addiction," Rekdal says. "If there's one thing we can say, it never hurts to offer more community services. You can look at it through the lens of history and war, but also through the lens of health care budgets cuts."

Mostly, there's a desire to keep probing our assumptions about the experiences of refugees, immigrants and American "others" of all kinds, especially as political rhetoric grows heated. "What is crazy?" Rekdal asks, paraphrasing a response of one of her interview subjects. "The day-to-day experience of fearing the police, or not knowing the language, can be a crazy-making experience. It is a day-to-day grind of low-level stress. It's something we underestimate unless we see it up close."