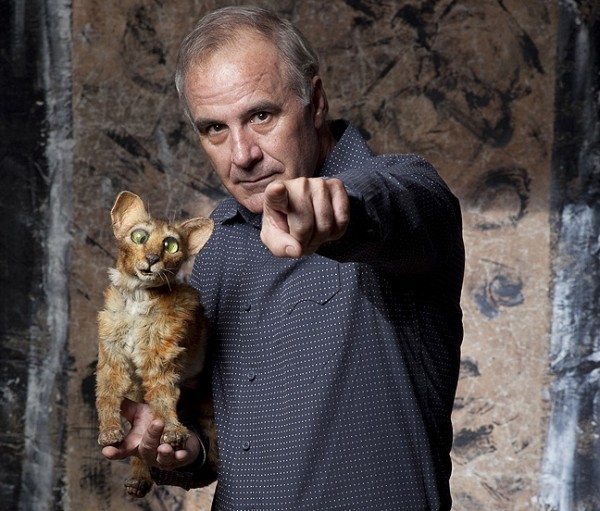 Trent Harris’ book Mondo Utah provided the title for—and was one of the focal points of—2013’s monumental Mondo Utah art exhibit at the Utah Museum of Contemporary Art, which served as a retrospective of the work by a diverse group of local artists. Established by UMOCA’s then-Senior Curator, Aaron Moulton, as the inauguration of a massive biennial exhibition of Utah artists, the show featured eccentric visual works that can be out of the ordinary for the local art scene, and also demonstrated the sheer imaginative talent of Utah artists.

Current UMOCA exhibition Trent Harris: Echo Cave takes a deeper look into the filmmaker/artist’s work. He is known for full-length independent films like Rubin & Ed and The Beaver Trilogy, but this show—the name of which comes from his website, EchoCave.net—reminds us that as much as his works are those in which an off-kilter imagination takes full flight, they are also composed of singularly strange moments and episodes of odd visions. This collection of drawings, photographs, artists’ books and short films offers a glimpse at Harris’ inner workings.

Since the age of 18, Harris has been working on some kind of film project every day, and he says the total number of projects is more than 100. “People ask me why I do it, and I say, ‘To keep from going mad.’ And I am not sure it is working,” Harris says. “Also, making films is a way to bully people into seeing the world the way I do. My brother said I make films about heroic misfits. My mother said I have a benevolent respect for the bizarre. Whatever I do, it certainly makes no money, but I am happy.”

Those misfits have included Crispin Glover as Rubin Farr—a role that helped cement the actor as an eccentric personality in the public eye—in Rubin & Ed and Stefene Russell as Lucinda Hall, who found herself in the center of a “through the looking glass” alternative universe parody of Mormon culture in Plan Ten From Outer Space.

This assemblage of fragments and snippets from Harris’ work is an echo chamber of ideas that resonate all through his work. “The show does not include specific bodies of works, but rather combines excerpts, photographs, posters and props from his films in a sort of phantasmagoric portrait of Trent as both filmmaker and visual artist,” says Sarina Ehrgott, UMOCA’s marketing director.

It all reveals Harris as someone who has a formidable imagination for visual storytelling, in all its forms. “My interests have changed over the years,” he says. “Now I am much more interested in art museums than I am in movie theaters. Independent film as I once knew it is long gone. Everybody and their horse is making a film now, so there is way too much out there and nobody pays attention.”

Moulton says, “Harris’ work as a visual artist is virtually unknown and the exhibition collapses the many faces of Trent’s cultural output as one interconnected and constantly evolving project, a naked mind map.”

Indeed, Harris’ favorite piece in the show is an 18-foot-long photograph of, as he describes it, what goes on in his brain. “I call it, ‘My Brain!’” he exclaims. “I could have made it a lot bigger, but there is just not enough wall space in the world.”

Harris has a lot of new work in the show, including his first video installation—shown on three screens—featuring his friend and “muse,” dancer and actress Liberty Valentine, who was one of the stars in his 2008 film Delightful Water Universe. Viewers can also see projected selections from his notebook—another view of his brain, as he spilled it out on the page working out ideas for projects.

During the past year, Harris has been on the road doing retrospectives, in cities like Los Angeles, New York and London, and the one he is most proud of was at the San Francisco Museum of Art as part of the Cindy Sherman Selects series. However, none of these other exhibits featured work other than films. Those filmic projections of his imagination have been celebrated in the indie, “outsider” film sphere, but this other, more personal work in the UMOCA exhibition examines the echoes of imagination within.

Harris says, “My friend Christina said, ‘Trent, you have been ignored for so long that [the visual retrospective] is interesting.’ She also went on to say, ‘This too will break your heart.’ I wonder why she said that?”