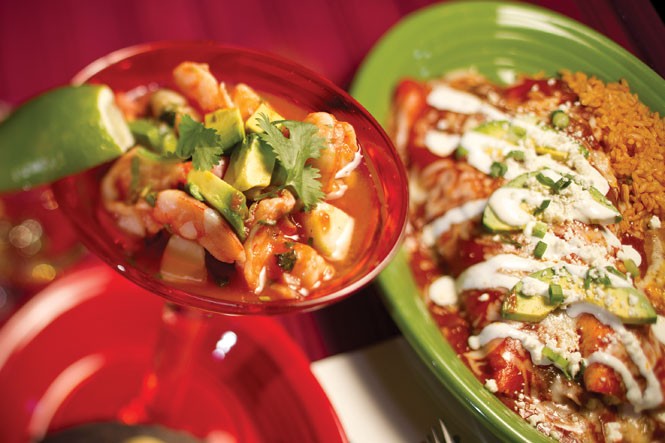 If you were alive and kicking in September 1984, you might recall some of these milestones: The first MTV Video Music Awards were held, with Madonna creating controversy with risqué onstage cavorting during "Like a Virgin." Prince's Purple Rain was dominating the radio airwaves and music charts, and Dynasty was the most popular show on TV. Ronald Reagan was president. Pete Rose made history by becoming the first baseball player to ever get 100 hits for a record-breaking 22 consecutive seasons. Splash, Indiana Jones & the Temple of Doom and This Is Spinal Tap were in theaters, and the first Apple Macintosh computer went on sale. Oh, and Tres Hombres Mexican Grill & Cantina opened its doors on Highland Drive.

Inspired by the ZZ Top record Tres Hombres, the original Tres Hombres Mexican eatery opened in the spot that was originally CarpeTowne, which included the iconic CarpeTowne sign featuring the three owners of that business. Ultimately, the signage was updated to depict the Tres Hombres owners in sombreros, and today it's a local landmark, although now there are just dos hombres: Mike Gibson, who runs the kitchen, and partner Don Bostrom, who says he just "tries to stay out of the way." It's a family business, too. Chatting with Don, he mentioned that both his and Mike's kids have worked at the restaurant. There's a distinct familial vibe at Tres Hombres, celebrating its 30th anniversary this month, that is difficult to fake.

City Weekly contributor and blogger Amanda Rock wrote that the "Top Shelf Margarita menu is worth the trip [to Tres Hombres] alone." I don't disagree. Barman Martin Ruiz has had 27 years behind the Tres Hombres bar to perfect his tequila cocktails, which range from a classic margarita ($6) to his Tijuana Ice Tea ($9). I like the simplicity of the El Jefe, a pairing of Patrón Añejo tequila with Patrón Citrónge Orange Liqueur ($12). The Rose Angel is also dee-lish: Gran Centenario hibiscus-infused Reposado tequila and Cointreau orange liqueur. Or, opt for something more straightforward like a snifter of Don Bostrom's favorite: Corzo Añejo tequila ($10), which he special-orders exclusively for the restaurant. Indeed, the tequila selection at Tres Hombres is one of the most extensive in Utah.

Equipped with a brand-new upstairs patio that seats a couple dozen customers, Tres Hombres has a tropical, beachside feel and look. So, it's a no-brainer to begin a meal with coctel de camarones ($9.99): plump, tender shrimp from the Gulf of Mexico tossed in a cocktail glass with minced cucumber, red onion, cilantro, tomato, avocado and spicy housemade cocktail sauce. I also really like the flautas as an appetizer. These are flour tortillas stuffed with shredded beef or chicken and rolled into a flute shape (flauta means "flute" in Spanish), deep-fried and served with a spicy avocado puree and pico de gallo ($8.99 for four). Of course, every meal at Tres Hombres begins with gratis chips & salsa and, unlike many places, refills are free.

Is the Mexican food at Tres Hombres the most "authentic" in town? Of course not. For that, you'd need to brush up on your Spanish and go to a place like Julia's, pay cash and forego the margaritas. Still, the Cal-Mex style food here is much better and of higher quality than, frankly, I'd expected. Chef Mike Gibson doesn't use lard, for instance, and yet the refried beans that come with most dishes (refried beans are always a baseline indicator for me) are really flavorful, with hints of cumin and a robust texture.

Portion sizes for most dishes run from massive to gargantuan. "People expect big portions here, and no one walks away hungry," Bostrom says. True. Even as delicious as it was, I could only get about halfway through my El Puerco burrito ($13.99), which is an oversize flour tortilla stuffed with slow-roasted carnitas-style boneless pork, topped with chile verde and served with Mexican rice, refried beans and pico de gallo. When I saw the huge plate coming, I knew what I'd be having for lunch the following day: leftovers.

One of Tres Hombres' most popular menu items is the Zacatecas enchiladas ($12.50/lunch; $17.99 dinner). Gibson says he has customers who come from Idaho and places like Lehi and Layton solely for this dish. And, I can see why: It's very tasty. A flour tortilla (one at lunch; two at dinner) is filled with tender shrimp, crab meat, green chiles and queso fresco, then topped with a deep red "Spanish sauce" that beats typical red enchilada sauce all to hell. My wife ordered the Zacatecas enchilada for lunch and was impressed by the large "side salad" that came with it: a big bowl of greens and tomatoes topped with generous slices of fresh avocado, with a zippy green-chile dressing on the side.

There are Utah restaurants that are better known for their mole. However, I've gotta hand it to Mike Gibson and his crew: the mole at Tres Hombres is top-notch. Gibson spent time in Oaxaca learning to make the dark, complex mole that elevates his enchiladas de mole: two blue corn tortillas stuffed with spiced chicken and baked with that luscious mole sauce and jack cheese. Speaking of cheese, although I've really enjoyed everything I've eaten at Tres Hombres, I do think the melted cheese on top of most dishes is a bit heavy-handed. But, people do seem to love their cheese, and the cooks will happily 86 it, if requested.

Service at Tres Hombres is friendly and professional and—when combined with rib-sticking Cal-Mex fare, an appealing atmosphere and excellent beverages—it's not hard to imagine Tres Hombres thriving for another 30 years.