UMFA's Reconciliation is a journey through artist Trevor Southey’s life. 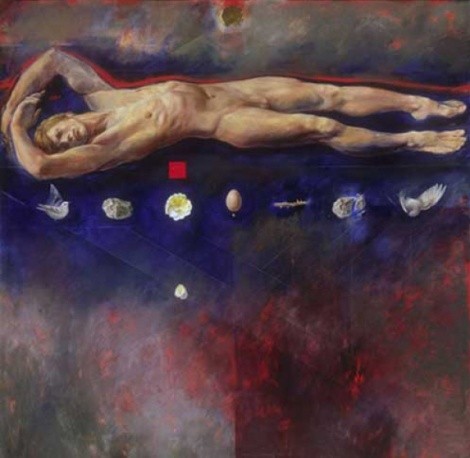 On the flight from San Francisco to Salt Lake City for the opening of his retrospective exhibit Reconciliation, painter Trevor Southey was greeted with an in-flight bottle of champagne. How many visual artists are even recognized, let alone celebrated?

It’s a mark of the affection of the public for this sometimes-controversial artist. Born in Rhodesia (now Zimbabwe) in 1940, Southey has assembled about 60 works from an artistic career spanning half a century for a career retrospective at the Utah Museum of Fine Arts. That’s a major exhibition by anyone’s standards. Two years in the making, the exhibit—organized by guest curator Day Christensen and Donna Poulton, UMFA associate curator of the art of Utah and the West—includes works owned by BYU and the LDS Church, as well as private collectors.

Walking through the rooms of the exhibit is a journey through different periods of Southey’s life. Works depicting his home environment as a youth reflect affection for rural farm life that would carry through to later years. His studies included Brighton College of Art in Sussex, England. He moved to Utah in the late 1960s, got married and converted to the Mormon church. It bothered him that there wasn’t a distinct Mormon artistic style, and so he helped start the “Alpine Ideal” school in the Utah County town of Alpine.

He hadn’t really seen much art until he came to America, and jokes that at the Tate Gallery in London, he went right past Henry Moore to the pre-Raphaelites; “I wasn’t really interested in the 20th century,” he admits. The idealized human figures of this school greatly influenced his own work. The second room of the exhibit focuses on Southey’s life in Utah as an active LDS member, and his works in the “Alpine Ideal” group express a desire for a utopian lifestyle based around family, farming and art.

“Compared to Michelangelo’s ‘Pieta,’ LDS art was disappointing,” he recalls. His work “Jesus and Mary: The Moment After” is one of his most powerful religious works of the period, in triptych form. First depicting Mary in grief, then Jesus risen from the grave, then Mary afterward, its symbolism is pointed. Southey explains that the red rose represents mortality, and the white rose the purity of immortality. The piece also marked his solution to the problem of exhibiting nudes at BYU: the use of drapery.

The third room of the exhibit examines works from around the time Southey acknowledged his homosexuality in 1982, moving to the Bay Area, where he lives with his daughter and grandson. “The painting ‘Reconciliation’ is what life is all about, in my view,” he says. “It takes elements of the human and reconciles them. ‘There must needs be opposition in all things,’ ” he says, quoting the Book of Mormon. The opening of the exhibition, on Oct. 21, featured panel discussions and an artist’s reception with a performance by the Salt Lake Men’s Choir as part of Pride Week.

In the final two rooms, Southey’s reconciliation of his life decisions continue to be explored through his evolving artistic approach to the human form. “The fourth room is the most significant,” Southey says. “I had become myself.” By 1994’s “ ‘Meeting,’” he says, “finally I meet myself, come together and am reconciled.”

His style was changing, too. By the period of the fourth room, he felt free to scribble on paintings, a modern touch. But those are just traces of his working method: Rather than pre-sketch, he draws directly on the canvas. The lines also represent something—“the great cosmic order, in the face of despair in the world, which is never total,” he notes.

“Trevor is a profoundly honest person and artist,” notes UMFA Executive Director Gretchen Dietrich. “He has stayed true to his impulse, and there is something really powerful and admirable about that. There is a sense of someone who has struggled to be who he is.”

Southey’s is an at times highly autobiographical work passed through the prism of an “idealistic” classical style, but it’s really the most personal kind of artwork in a sense: the artist seen through the artist’s eye. Dietrich says, “Trevor Southey’s work shows very much about what it is to be a human being.” Southey is known for being highly critical of his own work, but he says that seeing them all together is a way of thinking of them “like a family.”

Though he has been diagnosed with prostate cancer and Parkinson’s disease, the 70-year-old continues to produce art. “I tire sometimes, but my hands aren’t affected,” he notes. A private collector has commissioned a sculpture and painting that may hold the key to his next stylistic evolution—more modernist but still containing figural elements. “They see something more abstract emerging in my work,” he marvels.