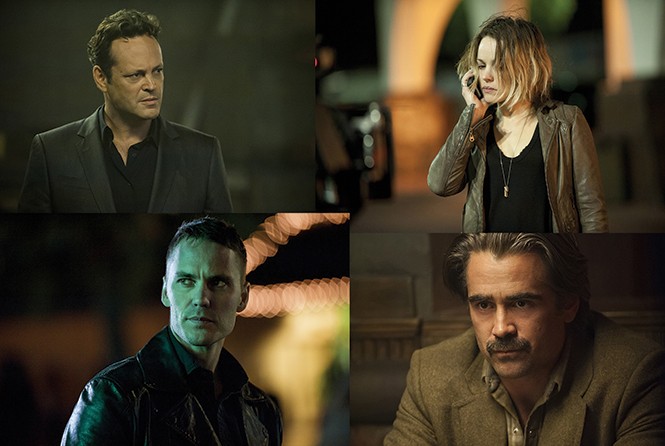 
Season Premiere: How do you top Matthew McConaughy and Woody Harrelson from True Detective's killer debut season? Double-down on the star power: Besides Colin Farrell and Vince Vaughn, Season 2 also features Rachel McAdams and Taylor Kitsch as co-leads, and the supporting-cast bench isn't lacking, either. Vaughn is a mob boss looking to go legit, Farrell is a troubled detective—to put it mildly; he makes McConaughey's Rust Cohle look like a Walmart greeter—who owes Vaughn, Kitsch is a highway patrolman with a past, and McAdams is a hard-as-nails cop written to singlehandedly obliterate Season 1's Weak Female Problem. Likewise, Season 2 ditches its predecessor's supernatural hoodoo and time-jumping plot in favor of a linear, hard-boiled California crime story that doesn't seem to be leading to Season 1's "happy" ending. To paraphrase Spinal Tap, How much more bleak could this be? The answer is none. None more bleak. But sooo damned pulp-good.


Series Debut: After True Detective, some comic relief is needed—so how about the threat of World War III? The Brink stars Jack Black as a low-level State Department hack in Pakistan out to score weed with his driver (Aasif Mandvi) when protests break out and a none-too-stable general (Iqbal Theba) threatens to go nuclear. Back at the White House, the womanizing boozehound Secretary of State (Tim Robbins, stealing the show) attempts to talk the Secretary of Defense (Geoff Pierson) and the President (Esai Morales) out of striking pre-emptively as a bomber pilot (Pablo Schreiber, better known as Pornstache from Orange Is the New Black) is already en route. As a Veep-meets-Dr. Strangelove geopolitical comedy, The Brink smartly keeps Black's we've-seen-it idiot from dominating the show, but your faith in government ... well, probably won't change at all.


Series Debut: Dwayne Johnson has become such a larger-than-life action star that "The Rock" qualifier is irrelevant; casting him as a painkiller-popping ex-NFL star trying to scrape together a post-football life almost feels like a Saturday Night Live sketch. Sure, he's as charming as ever as Spencer Strassmore, a retired Miami Dolphin transitioning into becoming a financial manager for his fellow money-burning retirees and clueless rookies (or "monetizing friendships," as his boss, played by Rob Corddry, says), but a sympathetic underdog? Not happening. Ballers critiques the chew-'em-up-spit-'em-out culture of pro sports almost as much as it revels in the glamour, but Johnson is just too big—in every sense—for his role. Maybe HBO should have called Kenny Powers of Eastbound & Down out of retirement.


New Series: Marti Noxon has contributed to some classic TV series (like Buffy the Vampire Slayer and Mad Men) and created at least one winner (2014's Girlfriends' Guide to Divorce), but her new UnReal probably won't be listed among them—but not for lack of trying. A drama set behind the scenes of a reality-dating show, UnReal pits a ruthless showrunner who's not above manipulating anything on the screen for ratings (Constance Zimmer, in her usual ballbuster Constance Zimmer role) against a producer with at least a twinge of conscience and TV-PTSD issues galore (Shiri Appleby). Thing is, no one here is remotely likeable (very Showtime, but not very Lifetime), but at least there's a winking acknowledgement that this brand of "reality" is complete bullshit.


Series Debut: The Bellacourt sisters (Natasha Leggero and Riki Lindhome) were the Kardashians of the early 1900s, concerned only with being rich, famous and relatively disease-free. Leggero and Lindhome are two of the funniest comic actors around, and the rest of the cast (including Michael Ian Black, Paget Brewster, Brett Gelman, Christina Hendricks, David Koechner, Jason Ritter and David Wain) is equally impressive. But Another Period is more silly than stellar, like a leftover episode of Drunk History (same director, coincidentally) that wasn't done cooking yet—nice summer filler behind Inside Amy Schumer, but it likely won't last any longer than that. Leggero deserves her Big Break—has Season 3 of True Detective been cast yet?


Series Debut: Vigilante hacker by night/corporate IT drone by day Elliot (Rami Malek) is recruited by the mysterious "Mr. Robot" (Christian Slater), the leader of an "underground hacker group," to e-destroy the company Elliot works for. If you misread the title and were momentarily excited about a series based on the 1983 Styx hit "Mr. Roboto," apologies.