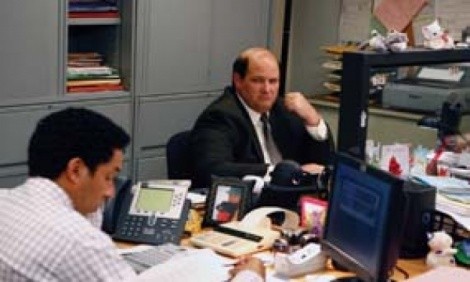 The Gong Show, Reality Bites Back Thursday, July 17 (Comedy Central)
Series Debuts: NBC’s smarm-wreck America’s Got Talent is just an overly earnest clone of The Gong Show, so why not bring that back? With Dave Attell in place of original host Chuck Barris? (See, kids, The Gong Show was on in the ’70s, back when Hoover was president.) I believe the question answers itself. Slightly more entertaining is Reality Bites Back, wherein comedians “from all over the Los Angeles area, and a couple from New York” compete in spoofs of popular reality-competition shows, all presided over by Michael Ian Black. Since neither The Gong Show nor Reality Bites Back is as ridiculous as their targets, they must be viewed as legit talent shows. Mind. Blown.

Monk, Psych Friday, July 18 (USA)
Season Premieres: Previously, there was only one way to differentiate eras of Monk, which has been running on USA since the aforementioned Hoover administration: His assistant. If, in the rerun you’re watching on FaceTube or wherever Monk’s sidekick looks like a petite drag queen, it’s pre-2005; if she looks like the blonde from Two Guys, a Girl & a Pizza Place, it’s 2005-08. Now, since the actor who played Monk’s therapist is dead, there’s another watermark: Hector Elizondo, his new shrink. Other than that, same ol’ OCD detective show. As for Psych, well, if you either loved or hated the wacky crime-solvin’ antics of Shawn and Gus before (True TV finds ’em hysterical, FYI), your mind will not be changed, much less blown.

High School Musical: Get in the Picture Sunday, July 20 (ABC)
Series Debut: Wondering why Nick Lachey was spotted around Salt Lake City a few weeks ago? More pressingly, wondering who Nick Lachey is? The former Mr. Jessica Simpson is the host of High School Musical: Get in the Picture, yet another reality-talent show. What’s the ultimate prize? Starring in a music video to be shown in the end credits of High School Musical 3. Seriously. This is a major network series. Projected to air for 10 weeks. And it’ll be a hit. Kill me.

Buzzin’ Wednesday, July 23 (MTV)
Series Debut: When reality TV last left Cisco Adler, his Black Crowes tribute band Whitestarr was stumbling through The Rock Life on VH1, home to that old folks’ music known as rock & roll (ask your grandparents during a Matlock commercial break). Shockingly, that didn’t catapult Malibu rich-kid Adler to superstardom, so he’s going the producer/mentor route with young rapper Shwayze on MTV, the channel that gave up on rock & roll long ago in favor of hip-hop and dating/mating shows that pair up the slimmest and dimmest from the shallow end of the gene pool to further dumb-down and prime America for an easy takeover by any country with an even marginally higher national IQ. I mean, MTV is awesome! Nick Lachey had a show there once …