3:10 to Yuma
Christian Bale tries to extradite bad guy Russell Crowe via a train to Yuma that leaves at, yep, 3:10. Love the simplicity of Westerns. Lionsgate.com 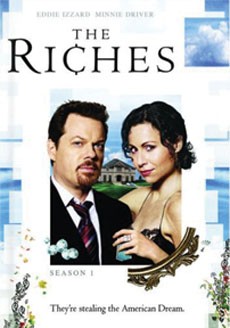 The Riches: Season 1
Eddie Izzard and Minnie Driver grift their way into suburbia under assumed IDs, only to realize the suburbs suck. A cautionary tale. FoxHome.com

Sunshine
A group of scientists must reboot the sun before it and Earth die. So much for your “global warming” Nobel Prize bullshit, Al Gore! FoxHome.com

hite Noise 2
Nathan Fillion and Katee Sackhoff slum it in the sequel no one asked for, about ghosts in a ham radio. Or was it a ham sandwich? NBCUni.com

BROADBAND
The L Word
Since Sunday, Dec. 30, OurChart.com (the lesbian social-networking site launched by The L Word and Showtime—Queer as Folk was never this proactive) has streamed the Season 5 premiere of The L Word in its entirety, a full week ahead of Showtime. Be advised that it’s a cleaned-up PG-13 version of the episode and … oh, lost you?