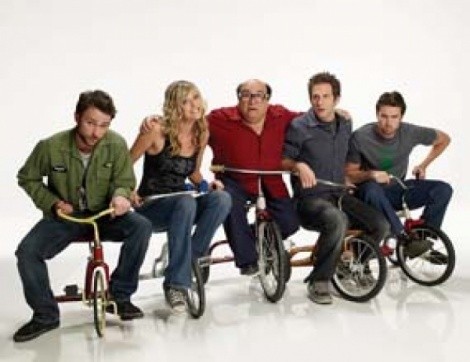 It’s Always Sunny in Philadelphia Thursday, Sept. 18 (FX)nn n n n n
Season Premiere: So, what’s left after last season’s Dumpster babies and “Night Man” (aah-ah-haa!)? The first episode of Season 4 gets right to it: Cannibal cuisine and man-hunting for sport. Charlie and Dee develop an insatiable taste for human flesh after raiding Frank’s (Danny DeVito ain’t going away—get over it) “mystery meat,” while Dennis and Mac go all Most Dangerous Game (or Gymkata, if you will) on hapless/homeless Cricket. In the second ep immediately following, the gang sells barrels of gasoline door-to-door. Need it be reiterated that It’s Always Sunny in Philadelphia is the funniest show on TV? Didn’t think so.

Burn Notice Thursday, Sept. 18 (USA)
Season Finale: Tonight! In the Season 2 finale of Burn Notice! Spy intrigue! Guns! Romance! Motorcycle chases! Bikinis! Explosions! Closure … answers … not so much. Despite this season’s introduction of Carla (Tricia Helfer, Battlestar Galactica), the mysterious woman who may or may not have burned him out of the spy biz, Michael (Jeffrey Donovan, still cooler than a frozen mojito) is no closer to the truth. And if this means several more seasons of Burn Notice, I’m fine in the dark. As always.

Worst Week Monday, Sept. 22 (CBS)
Series Debut: Some pilots leave no sense of how a series might sustain itself after a month or so on the air; Worst Week (adapted from—all together now—a Hit British Series) doesn’t even hint at a life beyond the seven days in the title. A shlubby groom-to-be (shlubby Kyle Bornheimer) spends a week with his pregnant fiancée’s parents; uncomfortable shit happens. Over and over again. None of it’s funny (not even in that Nuevo awkward = comedy sense), making this the rare modern sitcom that might actually benefit from a laugh track. Or a rebate. Is it too soon to miss Rules of Engagement?

The Mentalist Tuesday, Sept. 23 (CBS)
Series Debut: A charming rogue with hyper-developed observational skills works as a consultant for California cops while trying to put his shady past as a sham psychic medium behind him … is this Psych: The Next Generation? No, it’s good-lookin’ Simon Baker (late of CBS’ The Guardian and Smith) as good-lookin’ Patrick Jane, a “loose cannon” who “plays by his own rules” but gets away with it because he’s “too damned valuable to lose.” Another fine product from the CBS Cop Show Generator 3000®.

Gary Unmarried Wednesday, Sept 24 (CBS)
Series Debut: Jay Mohr has starred in one great TV show (1999’s Action) and guested on several questionable ones (like Ghost Whisperer—it’s on Fridays; ask your mom). But, can he headline a traditional sitcom with kids and a laugh track? Alongside infamous “show killer” Paula Marshall? (Note: She didn’t tank Showtime’s Californication, but I’m chalking that up to the full-frontal nudity—listening, CBS?) Gary Unmarried is a resounding “uh, maybe,” with Mohr tossing off passable one-liners as recently divorced Gary, a harried dad-of-two working to get along with the ex (Marshall) while trying to get it on with new women. Makes sense that it’s paired with The New Adventures of Old Christine: It’s the same show with the genitalia switched.

Knight Rider Wednesday, Sept. 24 (NBC)
Series Debut: The boneheaded TV-movie update from the spring is now a boneheaded series—again! It’s a tall order to (re)make a dumber series than the ’80s original, but the new Knight Rider operates on a whole ’nother level of Slick Stoopid: David Hasselhoff at least threw an occasional camp wink at fighting crime with a talking car; new tool Justin Bruening (as “Mike Traceur” … no, really) thinks he’s on Special Vehicles Unit. Even worse, the first three episodes of Knight Rider 2.0 are titled “A Knight in Shining Armor,” “Journey to the End of Knight” and “Knight Fever.” See the pattern? Knight Rider must be stopped!

Listen to Bill Mondays at 8 a.m. on X96’s Radio From Hell. Tranny-fashion blogging at BillFrost.tv. Even more True TV linkage at MySpace.com/TrueTV and on Facebook.