Last New Episodes
Apparently, the only news some of you follow is about the Writers Guild of America strike, so here’s the latest: It’s still going on, no end in sight, get ready for reality shows and leftovers. The twist of the knife is that you’ve seen the last new episodes of Reaper, Dirty Sexy Money, The Office, Chuck, Heroes and Bionic Woman (likely the last ever for Jaime Summers—sorry, dozen remaining viewers) for the foreseeable future, not to mention Two & a Half Men (but the reruns are indiscernible from new ones, so no biggie). This week, the last pre-strike eps of How I Met Your Mother and Pushing Daisies run out; then, everything else but … October Road. A nation huddles in terror.


Monk, Psych Friday, Dec. 7 (USA)
Christmas Episodes: Well, one of ’em is Xmas-related: In “Mr. Monk Shoots Santa,” Monk guns down St. Nick—yeah, I saw it coming, too. Not to give too much away, but the rest of the episode unfolds in true OCD-Matlock fashion around a diamond heist. Then, on the vaguely holly-jolly Psych ep “Gus’ Dad May Have Killed an Old Guy,” well, even an October Road fan could figure that out. Still, both are funny in their goofy-quaint ways, now that robbery and murder have been demoted to comedy while the “real” cop shows now only deal in rape, dismemberment and Second Life (saw two in one week, swear). Come 2012, the Monk Xmas special will be called “Mr. Monk and the Dead Gang-Sodomized Elf,” and it’ll be sooo cute!

Dave Attell: Captain Miserable Saturday, Dec. 8 (HBO)
Somewhere during the 10 years since his last solo HBO stand-up special, Dave Attell became the Insomniac guy, the stubbly drunk who stumbled through various cities around the world late at night (including Salt Lake City) for Comedy Central. Now he’s back to simply being one of the funniest comics in America—and, by funny, I mean sick, wrong and unafraid to alienate, oh, anyone. After extolling the joys of Jägermeister (“It’s too sweet. I give it out on Halloween: ‘Here’s a shot—go home and find your dad’s gun and be somebody.’”), kids (“I love children—I’m on the Internet talking to them all day.”) and other American pleasures (“Guys, women don’t like anal sex … they love it!”), Attell tells the world’s longest scatological joke—he has the tiara to prove it.

Snoop Dogg’s Father Hood Sunday, Dec. 9 (E!)
Series Debut: The Girls Next Door, the Kardashians, Kimora … Snoop Dogg? Is it possible that Mr. Dogg has sold his Ozzy/Gene-knockoff reality show to E! simply for the opportunity to, as they say, tap some of that? Just askin.’

The Hills Monday, Dec. 10 (MTV)
Season Finale: Are you, like, going to watch The Hills’ season finale? I don’t know if I am. Sometimes, I just think The Hills doesn’t even care about me, you know? That’s a pretty bracelet. What do you want to do? Like, I don’t know what I want to do. Should we do, like, something? Yeah, maybe not. Should I text The Hills? I’m texting The Hills. Oh my God, The Hills isn’t even answering me. Want to make out? No? OK, let’s, like, watch The Hills …

A Shot at Love With Tila Tequila Tuesday, Dec. 11 (MTV)
Season Finale: In other Decline of Western Civilization news, MySkank superstar Tila Tequila tonight finally chooses a boyfriend, or girlfriend, or whatever. Does that mean our national nightmare is over? Of course not—MTV is harder to bring down than the Taliban. A second round of Shot at Love (with a different “bisexual” star) is in the works, as is a spin-off starring Tila reject … Domenico. I need a Jäger and Dad’s gun …

Dark Mind
The older brother from Malcolm in the Middle is a crazy scientist involved with a conspiracy and a waitress. Huh? EchoBridgeEntertainment.com

The Nanny Diaries
A working-class gal (Scarlett Johansson) becomes a nanny for rich kids, but her voice is 10 octaves lower than Fran Drescher’s. TheWeinsteinCo.com

Pirates of the Caribbean: At World’s End
As trilogy-enders go, it’s not as bad as Spidey 3 or X-Men 3, but it’s still a mess. And Keith Richards is wasted—in his guest role, that is. Disney.com 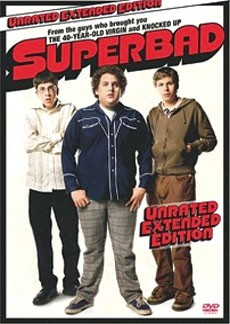 Superbad
Two high-school losers hunt for booze and poontang with the help of dumb cops, a supa-funk soundtrack and McLovin. Inspiring. Sony.com

LateNightUnderground.com
Not only is Conan O’Brien paying his staff out of his own pocket during the writers’ strike (suck that, Carson Daly), but he’s also growing a … Strike Beard! It’s not as ominous as it sounds, but you can track his stubble at the new LateNightUnderground.com, a time-killing blog/vlog where O’Brien & Co. kill time while … killing time. It’s better than Jimmy Kimmel Live.

Listen to Bill Mondays at 8 a.m. on X96’s Radio From Hell. Damn near no blogging at BillFrost.tv.