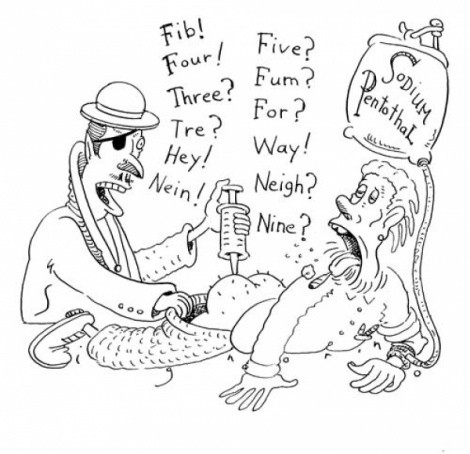 What’s the straight dope on truth serums? What are they? What exactly do they do? Do sodium pentothal and the like really make witnesses spill their guts? If so, why don’t we use it for courtrooms and police interrogations? Please hurry, my suspect is wrestling his way out of the handcuffs. —J.F.

Truth serums are based on a phenomenon known since ancient times, when Pliny the Elder coined the phrase in vino veritas: “in wine, truth.” He meant anything that lowers your inhibitions is likely to cause you to say things you’d normally keep secret. Unfortunately for cops and CIA interrogators, what you spill isn’t necessarily the truth.

Although people have been plying one another with liquor for centuries, the earliest confession induced using something stronger was reported in a 1903 criminal case involving a New York cop. He admitted under ether that he’d faked insanity when accused of killing his wife.

The first drug to catch on in a big way as a truth serum was scopolamine, a depressant and sleeping agent. Mixed with morphine, it was used to put women in labor into a “twilight sleep” so they’d forget the pain. To gauge the dose, the doctor would ask the patient questions until she could no longer remember anything. The pioneer of truth serum research, a smalltown Texas obstetrician named Robert House, claimed his patients always answered truthfully during these times, and from this concluded the drug rendered them unable to lie. In 1922, he tried the technique on two prisoners in a Dallas jail, helping to exonerate both.

The age of truth serum investigation, also called narcoanalysis, had been born.

Although truth serum caught the fancy of reporters and some scientists, it was never widely accepted as a way of extracting criminal confessions. Several sensational early cases produced a variety of results. In 1924, 5 black men in Birmingham, Alabama, reportedly confessed under the influence of an unspecified truth serum to eight ax murders, then confirmed their guilt after the drug had worn off. (This comes from a four-paragraph account in the New York Times; I admit to some skepticism.) A few years later, a chauffeur in Hawaii confessed under scopolamine to writing the note in a kidnap-murder case but repudiated his statement afterward; ultimately, the crime was pinned on someone else.

By the mid-1930s, scopolamine had been largely abandoned in favor of safer drugs such as sodium amytal and sodium thiopental (of which Pentothal is a brand name). But the theory stayed the same: Once you’re in a trance and have thus lost the complex brain functions needed to sustain a lie, you’re reduced to telling the truth. Drugs were also said to be helpful in dredging up lost memories.

Sometimes they probably were. The problem with truth serums is the results can’t be depended on. It’s easy to find case reports of people recounting detailed stories under the influence of drugs of which they have no recollection afterward—and the stories check out. But researchers also admit despairingly that they know of just as many confessions that were demonstrably false. Drugs reduce some subjects to unintelligible babbling. Other subjects are suggestible and will tell you whatever they think you want to hear. Plus, just because somebody thinks something is true doesn’t mean it is.

But hope lives on in the shadowy corners of government. During World War II, the Office of Strategic Services, forerunner to the CIA, tried using cannabis extract to make people talk. Later generations of spies wondered whether they could get results with mescaline and LSD. In the 1950s, the CIA launched a covert research program called MK-Ultra to explore the possibilities of truth serums and behavior-modification drugs; it’s said to have run at least through the late ’60s. The project gained notoriety after one participant jumped out a hotel window while on LSD.

The U.S. Supreme Court has ruled that confessions obtained using drugs are inadmissible as evidence, on the premise that the

practice violates the constitutional protection against self-incrimination. The European Court of Human Rights has likewise prohibited the practice. Nonetheless, drugs continue to be used to extract confessions in some parts of the world. Police in India reportedly used drugs to convince two suspects to confess to a series of grisly killings in 2007.

After 9/11, some in the U.S. argued that truth serum ought to be used to extract information from terrorism suspects. Nothing so far suggests American authorities tried it, although it’s possible we turned suspects over to intelligence services in other countries with fewer scruples.

Though I don’t make light of ethical considerations, the argument likely to carry more weight in these nervous times is the practical one. Let’s say out of 100 bits of data forcibly extracted using drugs or other means, 5 are legitimate. How do you know which 5?

Comments, questions? Take it up with Cecil on the Straight Dope Message Board, straightdope.com,, or write him at the Chicago Reader, 11 E. Illinois, Chicago 60611. And now you can subscribe to the Straight Dope podcast-search for “straight dope” in the iTunes Store.