It's time to face facts, Utah: We're not what we pretend to be. 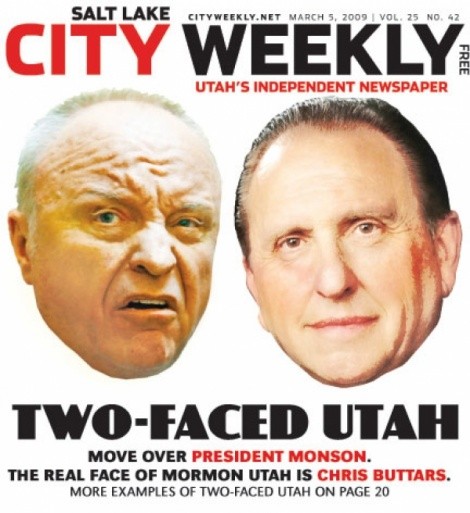 Utah is bisected along religious, cultural and ethnic lines. But Utah doesn’t like to show its two faces. Every effort is made to wear just a good face for our visitors, to smile for the cameras, to promote our wholesomeness and to otherwise let the world know that Utah is normal. Except it isn’t. And it’s getting worse.

The death of former LDS President Gordon B. Hinckley marked a transitory time in Utah’s perception of itself and of its residents’ willingness to cooperate with one another. Beloved on one side and highly regarded on the other, Hinckley may have been the last finger in the dike, holding back what is becoming a bloodbath of ill will toward each side of Utah’s cultural divide. Since Hinckley's death in late January 2008, a slew of angry influentials have grown so powerful and outspoken that, to persons outside the LDS faith, they appear not only to speak for the LDS faith but are tacitly allowed to do so.

Thus, to non-Mormons and outsiders, state Sen. Chris Buttars—who frequently cites LDS scripture—is the face of Mormonism, not current LDS Church President Thomas S. Monson. We can’t imagine this is a good thing. Nor can a growing number of formerly silent Mormons. If people like Buttars—and his hatemates on Capitol Hill—are ever to change or decline in influence, that change will have to come from pressures within the Mormon community itself.

In addition to the Buttars' dichotomy, Utah claims other “perception versus reality” points. We can all take blame or credit for espousing these views. Distrust cuts both ways. But when it comes to such divisions, there is a major disconnect between how we view ourselves and how outsiders see us. Our face is clearly two-sided. Following are just a few of the dirty little secrets Utah hasn’t fully shared with the rest of the world. Which statement is really Utah? You decide.

Readers can submit their own “perception vs. reality” points by commenting on this story.

Cover Story Cover Story not really With the Stars after Survivor: China second