Two for the Show

A pair of Utah dance companies get together for the first time for a virtual season premiere. 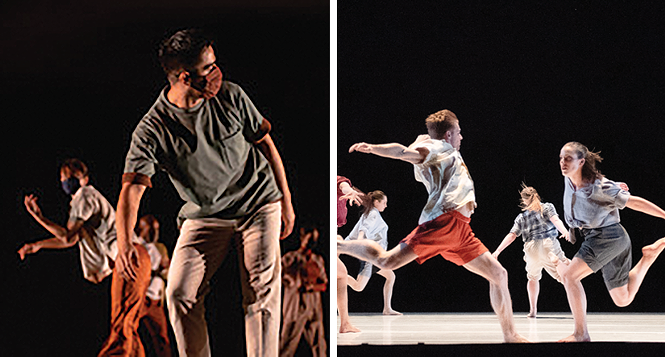 When you combine the histories of Ririe-Woodbury Dance Company and Repertory Dance Theatre, the companies have been dazzling and entertaining audiences for more than a century. Yet for all that history, the companies have never performed in tandem—even though they're joined in the minds of a lot of Utah residents. "We kiddingly always say that people get us mixed up because we both start with 'R,'" says Repertory Dance Theatre's artistic director Linda C. Smith. "But that kind of interesting dilemma also proved enticing to us: We've never really done a whole show together."

It took the unique circumstances of 2020 for RWDC and RDT to join forces, launching an unusual season premiere in this unusual time. On Oct. 3, Double Take—a pre-recorded joint performance of the companies' dancers—premieres online, allowing for a virtual experience of dance while the companies' home at the Rose Wagner Center remains closed to patrons.

The conversations surrounding the possibility of this collaboration began early in the pandemic, as the Rose Wagner's resident performing arts organizations began working together on a variety of issues and concerns. At that point in the spring, according to Ririe-Woodbury's artistic director Daniel Charon, the companies were still planning on being able to return to live performances for the start of the fall season. "We reached out to RDT ... and thought, 'Let's put something together and support each other,' almost make it a celebration of getting back in the theater," Charon says. "Then, as the months went on we started to brainstorm what this thing could be. ... And we always kind of knew, as we got closer, we were going to have to assess what the reality of the world was going to be."

It was only a few weeks before the scheduled performance dates that it became clear that an in-person performance wasn't going to be possible, taking into account a spike in COVID-19 cases, the realities of how many people the Rose Wagner's Jeanné Wagner Theater would be able to hold with social distancing, and ongoing concerns from patrons and supporters about the safety of returning to a theater. An online viewing option was always part of the planning even if a live performance had been possible, says Charon, "but it was a mutual decision to play it safe" and ultimately opt for a virtual-only presentation.

Since both Ririe-Woodbury and RDT had participated in the virtual Rose Exposed show in September, preparing their work for recorded presentation wasn't a brand-new experience. Nevertheless, both companies recognize that learning how to navigate this "new normal" for the performing arts represents a work in progress, with everyone figuring it out as they go. "How we present and [record on video] is going to be a learning curve," RDT's Smith says. "Yes, we had some technical bumps along the way, but considering the time and money we had, we felt very good about [the Rose Exposed performance]."

As they prepared their program, both companies also had to deal with the moving target of whether or not the work would be performed live. Technicians and backstage crew worked on a choreography almost as complex as what would be seen on stage, in terms of how the many performers would be able to move through the space while keeping social distancing guidelines and other safety protocols at the forefront. Ultimately, says Charon, "I felt like I was making multiple pieces—one that could work for a film, but maybe could be live. Going thought the process, there was uncertainty over what format it would be in. So I felt like I was wandering a little more. The process felt slower to me, because I had more questions than answers."

Charon's original world-premiere work Remote Convergence will be the middle piece in the scheduled 50-minute presentation, bookended by RDT's encore performance of Noa Zuk and Ohad Fishof's Outdoors, and the world-premiere of Reset by Justin Bass, winner of the company's 2020 Regalia competition. Choreography offers unique challenges, from introducing Zoom-meeting rehearsal participation by Israel-based Zuk and Fishof for revisions to Outdoors, to Charon's choice of using camera angles to suggest contact between dancers who are actually far apart. That innovative spirit has been noteworthy for all artists adapting to pandemic-era circumstances; as Smith puts it, "Many people love to have some sort of challenges within a framework that they can address."

It took those distinctive challenges to get these two celebrated dance companies on the same program—a silver lining to a difficult year for performing artists. "I feel like I've really grown closer to the people I work with," Charon says. "It's ironic, isn't it?"