Guy's Flavortown Kitchen comes to Utah. Are any of us prepared? 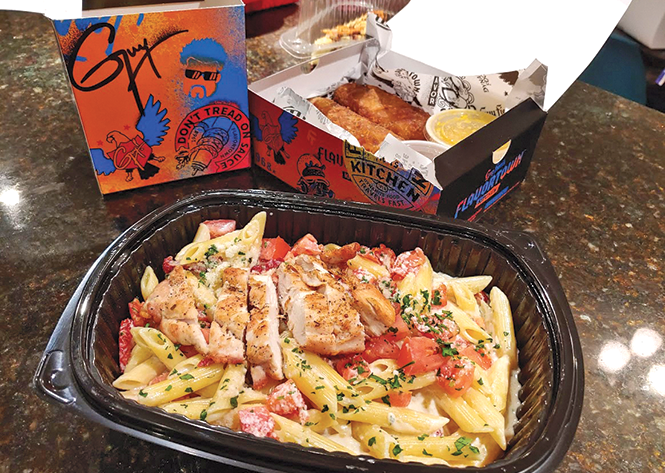 I'm a bit of a cultural enthusiast when it comes to Flavortown and its monarch, Guy Fieri—I may have dressed up as the platinum-coiffed celebrity chef for Halloween at some point within the past five years. Before last week, however, I had yet to plumb the depths of his donkey-sauce empire. Seemingly overnight, four locations of Guy's Flavortown Kitchen (guysflavortownkitchen.com) sprung up in Midvale, Murray and Downtown Salt Lake, offering some of the Food Network personality's trademark items delivered right to your home. Once I got wind of these delivery-only establishments, I had to check them out.

Most people know Guy Fieri as the host of Food Network's popular travelogue Diners, Drive-Ins and Dives, which spotlights under-the-radar eateries across the country. Local restaurants such as Moochie's, Oh Mai, Red Iguana, Proper Burger and others have all been featured during the show's run. Over the course of "Triple D's" lifespan, Fieri has firmly established himself as a catch-phrase spewing everyman who's not afraid to get mustard in his goatee. He's always been a divisive player in the realm of pop culture, and if you've ever wondered how the food conceived by this apotheosis of foodie-bro culture tastes, read on.

Since Guy's Flavortown Kitchen is delivery-only, their website for online ordering is your first exposure to the place. The menu is fairly sparse, consisting of burgers, pasta, salads and appetizers. As I've done a fair amount of ordering food online over the past year, I have to say that the ability to just click an item and have it automatically added to your cart before navigating through a zillion confirmation screens is a nice touch. I ordered up some S-M-Cheesesteak Egg Rolls ($14.99), a Bacon Mac N' Cheese Burger ($12.99), some Cajun Chicken Alfredo ($14.99) and the Cheesecake Challenge ($7.95), marveling at the Vegas-style prices as I awaited my order.

The food arrives in a sturdy paper bag, and the packaging is doing the food all kinds of favors. I've had lots of burgers squashed in transit, but Flavortown Kitchen puts their sizable burgers into their own box; maybe this is where that extra money goes. Either way, it makes for a structural burger that looks like it came right from the kitchen. The same goes for all the food I got. So far, so good, Flavortown.

I feel like the item that perfectly synthesizes Fieri's brand is the cheesesteak egg rolls. A hundred years from now, when Guy Fieri is nothing more than an urban legend, teens will say "cheesesteak egg roll" three times into a mirror to summon his ghost from an antiquated deep fryer. This appetizer is made with shaved ribeye and Flavortown's trademark super melty cheese (SMC), which is a goopier strain of nacho cheese. The genius of merging cheesesteak and egg rolls is not lost on me—I think stuffing golden brown egg roll wrappers with a Philly blend of ribeye and Cheese Whiz is fantastic. That said, these bad boys were just a bit heavier on the nacho cheese flavor than the ribeye. A bit of balance would do wonders here.

Next up was the mac and cheese burger, complete with accolades of winning burger contests in Vegas and New York. It's stacked to the rafters with nice thick bacon, crispy onions, lettuce, tomato, sliced onions, pickles and a heap of mac and cheese. The menu said it had donkey sauce too, but methinks it was overshadowed by everything else, so its flavor remains a mystery. The patty at the foundation of this towering inferno is a tasty example of burger craftsmanship—a good amount of salt, juicy despite being cooked medium well, and present enough to remain the centerpiece of the whole affair. I'm a fan of the thicker pieces of bacon here as well, and the amount of mac and cheese was just right. Overall, this is a solid burger, and my favorite item of the evening.

The Cajun Chicken Alfredo features a pile of penne pasta slathered in gooey alfredo sauce with sun-dried tomatoes and grilled chicken. This was an average plate of alfredo pasta—it's always good because alfredo, and the pops of sweetness from the sun-dried tomatoes were most welcome to the party, but I couldn't detect enough of the Cajun spices to differentiate it from any other plate of pasta alfredo. There's nothing inherently wrong with this dish—if you like pasta alfredo, you'll like this—but there's not a whole lot going on to set it apart.

For dessert, the Cheesecake Challenge is a tasty but tiny slice of cheesecake marbled with chocolate and topped with crushed pretzels, potato chips and chocolate sauce. It's got a nice fluffy texture which gets some help from the pretzels and chips that add a salty crunch to the mix. Maybe if the slice was a bit bigger, it would have presented more of a challenge.

All in all, Guy's Flavortown Kitchen is exactly what you'd expect from the duke of Flavortown: Lots of melty, cheesy, deep-fried comfort food-adjacent hits on the menu, all of which is straightforward and unassuming. If you're after something easy to eat and easy to order, it's definitely worth your time.