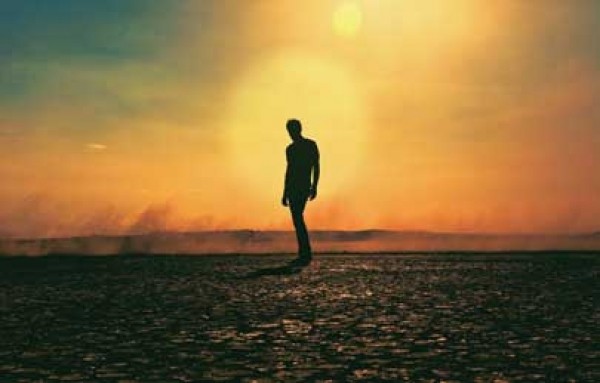 Scott Hansen is a patient but determined man. As the mastermind of ambient electronica project Tycho and the graphic designer also known as ISO50, Hansen speaks about carefully thought-through plans in an equally careful voice, always sounding decisive with his opinions, even as he states them in a restrained tone.

2011’s Dive, Tycho’s most recent record, also demonstrates this approach in action. Built out of earthy, soothing analog synths and, to a lesser extent, other flourishes such as soft brushes of acoustic guitar and a delicate but unintelligible female voice, Dive at first seems too innocuous and subtle to have an effect on you, but once you really listen to what it’s doing, absorption changes all that. This is a gorgeously airy—not lightweight—album whose sum evokes some distant, idyllic island of a past memory you don’t actually have. This island is not so fantastical as to be totally unreal—you can visualize the familiar textures of water and sand—but at the same time, it carries a latent surrealism, as if its beauty is too beautiful to be real. With that in mind, Dive functions like a daydream that fades in and out of reality, and the splendor that comes because of this confusion is intoxicating. Even the cover art—Hansen’s Salvador Dali-esque portrait of the sun melting into a desert, creating a strange ocean-like effect—seems almost real, but not. Dive’s subtle lushness makes it an album best experienced via high-end headphones and high-res monitors alike.

San Francisco-based Hansen treats Tycho’s concerts with the same amount of care. In the past, Tycho (which can also turn into a band for live performances) has projected color-treated footage from the 1973 surf flick Crystal Voyager and Jacques Cousteau’s Odyssey series during shows. Nowadays, Hansen is working with director Charles Bergquist and has moved on to shooting original footage in San Diego to make up most of his show’s visuals.

“We’ve got models,” Hansen says. “We went out to the desert and got helicopters and went climbing and all that kind of stuff. We’ve got a much different environment. The bulk of the new stuff is going to be that, but I wanted to pay homage to what the visuals were about before, so I wanted to keep two songs [“Hours” and “Adrift”] that had that 8mm thing going on—that old-school filmic style—but the rest is full HD. I’ve taken this footage and done a lot of the techniques I do with my print work, and that [makes it] feel kind of old—more tangible than digital.”

Hansen has big ambitions for his work. He wants to employ a music-video-like narrative for the series but plans on doing something based more on repeatedly exploring a theme than telling a linear story. In one example of a scene he’s shot, a model goes out to the dunes and finds items there (Hansen doesn’t say exactly what), and the film tracks her experiences in that environment. On paper, it might not sound like much, but Hansen has a strong enough grasp on his style to make that simple premise intriguing.

With Hansen’s generally elusive style of talking, it’s difficult to understand the full scope of his plans for Tycho’s live show (he does explain it as a dynamic lighting show with a cinematic edge), but odds are that the results will be remarkable. “I just want full immersion. I want [audience members] to walk away saying, ‘Wow, that was something else,’ because too often in electronic-ish music like this, you go to the show and it’s verbatim. What we’re about is trying to take the album and put it in a different light, and through the visuals, recontextualize it for people because they already have their own meaning attached,” he says. “It means something to you to see this whole other take on it, or maybe [this take] lines up pretty close [with yours], which can be a pretty powerful experience, as well.”Â