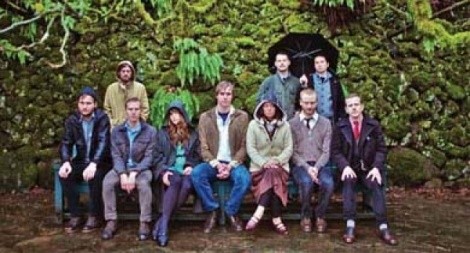 Typhoon is like the Noah’s ark of indie bands: There are two of just about every instrument—two violins, two trumpets, two drums and so on.

If Judgment Day comes, this little orchestra will be there. “We will help foster the procreation of instruments in the New World,” says Typhoon frontman Kyle Morton with a laugh.

If they didn’t hail from Portland, Ore., a city brimming with young, talented musicians, they could have easily swallowed up most of a city’s music scene in their swell. But the process of conglomeration, after six years as a band, on and off, has come to an end—almost.

“We have to close the borders on Typhoon. I think we’ve accumulated too many, well, not too many, but we’re at a sweet spot—we’re at critical mass with 13,” Morton says. “I don’t think we can go any bigger than that, unless we find a harpist.”

Put that in the classifieds.

In reality, the accumulation process has been natural. Morton, along with about half the band, moved from Salem to Portland for college. They continued playing music together and adding players. “We’ve been really lucky with the people we’ve met—musicians that play really well, but also share the same ideas of community,” he says.

With a large “community” of young musicians, it would appear that their biggest challenge would be the logistics of wrangling everyone for practice, shows and a tour, but Morton says it’s not too cumbersome. “Everyone’s really committed. Peer pressure works as a gravity and sort of binds everyone,” he says, adding that the only occasions where the numbers get tricky involve writing musical arrangements.

“We have to do it with one section at a time. When we have a tour coming up, you just don’t have the time to work on one third of the band at a time; you want everyone together,” Morton says.

With Morton at the helm, the orchestration is all done by ear and is highly stylized with a classical, compositional element. Morton lists Tchaikovsky, Beethoven and Bedrich Smetana, among others, as major personal influences. However, the music is decidedly modern—hip, in a Portland sort of way—as witnessed on Typhoon’s 2011 A New Kind of House EP, which was a follow-up to 2010’s Hunger and Thirst. Both were released on the Portland-based record label and art boutique Tender Loving Empire.

Where Typhoon’s players shine is in their ability to restrain themselves, rather than noodling along on any given tune. With that, a satisfying buildup is achieved impeccably. And since the songs have space to breathe, when the horns sound or the drums kick up, they pack a wallop. The music’s solid composition is sweeping and remarkable to see pulled off in concert.

“When we all play at once, there’s so much sound. That would be a little indulgent and a little bit of oversaturation,” Morton says.

Of late, Morton has also been influenced by classic Christian philosophers Blaise Pascal and Soren Kierkegaard. As such, his lyrics dip ever so slightly into the esoteric but, at face value, deal with coming to grips with life’s realities—sickness, death and so on.

That quasi-religious aura is noticeable in A New Kind of House. Willamette Week music editor Casey Jarman nailed it when he said listening to the album felt like going to church, if he were the church-going type. Jarman has witnessed the band’s growth, from “kids” to now touring with the Decemberists to making their television debut on David Letterman on August 4, 2011.

“I feel like I’ve learned a lot about the right way to grow a band just from watching them grow up together,” Jarman says. “I’m not sure the Decemberists are ready to let go of the proverbial Portland music torch, but I can’t think of a better band to see it passed to than Typhoon.”

He adds that, in Portland, what emerges on top of the scene is what is essentially the music of the people because there is an absence of big labels or agents backing bands. This is a time when a likeable collective—the Noah’s ark of bands—can rise organically from playing house parties several nights a week to reputable national success.

“I love that. I don’t think it’ll last forever, so maybe one day I’ll refer to this as the ‘Typhoon Era,’ ” Jarman says.