U of U Beer Brewing Club

Applying the scientific method to booze 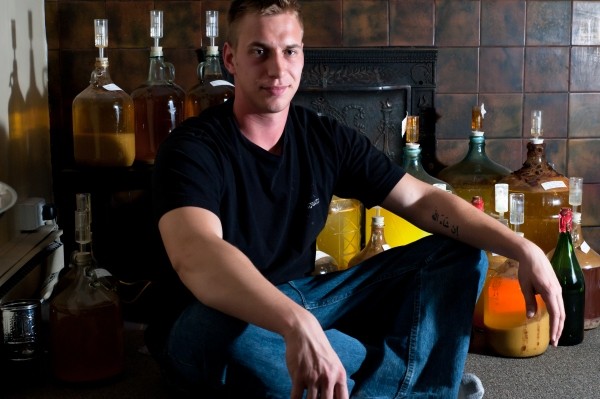 Ladan Jiracek began experimenting with home brewing when he noticed a neighbor’s tree dumping mini pears all over the sidewalk. Rather than make a thousand mini-pear pies, Jiracek juiced the pears and fermented the juice. Now, after three years of brewing, Jiracek—a junior in mechanical engineering, minoring in nutrition—has started the Beer Brewing Club, the first of its kind at the University of Utah. Contact uofubrewing@gmail.comÂ  for more info.

What’s the goal of the club—making lots of beer?
I want it to be an education club. Experiment together, have it be a forum. I don’t want members who want to show up and get drunk. It’s about education, about the scientific process, about learning how to do something that a lot of people don’t know you can do. I went to a party a while ago where the host made his own beer, and it was on tap. It blew my mind. A couple weeks later, a friend had a pig, killed it, and we had some meat from it. They’d brewed their own beer and put it on tap. It was really cool; you could literally taste their creativity.

And also be a learning club for alcohol—knowing the difference between a pilsner and a porter. They’re incredibly different. And awareness is a goal. Once people get away from the macrobreweries and assembly-line beer, they’ll be able to appreciate this stuff.

Was it a struggle to get the club approved at the U—a dry campus?
I was like, “OK, we’ll see. This is Utah. Let’s see if this goes through; let’s test the waters.” But we got accepted as a club. We recently submitted a budget to ASUU [the Associated Students of the University of Utah] to get funding, so we’ll see if that goes through. At that point, we’ll be a legitimate club. You can’t have alcohol on campus, so we meet off-campus. We made sure to stay within the guidelines; we drew up a constitution and make sure every rule is followed.

How often do you meet?
Once a month. It’s kind of expensive—to make 5 gallons, it’s like $40, which works out to 80 cents a bottle. It’s cheaper, like half the price, but still expensive. If we get funding it won’t be too bad, but I feel bad making everybody pay. We’re thinking about doing other activities throughout the month—a beer tasting, do a tour of a brewery, stuff like that. The beer takes about a month to ferment, so I want it to be so we can taste it at the club. “This is what we did last month, here’s what we did wrong, here’s what we can improve on, what’s your opinion?”

What started your interest in home brewing?
I walk to school every day, and about two years ago, I kept passing this tree that was just dumping—I didn’t even know what the fruit was, I found out later they were mini pears. I was like, “This is a waste.” I can’t bake them; I can’t eat a thousand mini-pear pies. So I decided to juice them, ferment it, and it turned out pretty good. This is my third year of brewing cider, and I’ve really ramped up production.

Do your parents approve of your extracurricular brewing activities?
They really like it actually. My mom is really helpful in the juicing process. She thinks I’m crazy, as anyone would. She hears about the explosions that happen in the house due to this stuff. The yeast, from sugar, makes alcohol and CO2. So if there’s no place for it to go, it breaks the vessel. So last year, when I added sugar and I bottled it, I bottled them too early, so I had six bottles explode. And it sounds like a gunshot—glass shattering. It scared my roommates a couple of times.


My parents are immigrants—my mom’s from Slovakia, my dad’s from the Czech Republic. Their beer is literally cheaper than water. You can get a 12-ounce Dasani, or you can get a half-liter of good, 8 percent beer for cheaper. So it’s kind of in our blood—they’ll help me take care of some of the bottles. I made a mead, which is like a honey wine. We’ll probably pop open a bottle for Thanksgiving.

How was your first batch?
I don’t like pear juice, but it wasn’t bad; it was palatable. And I got drunk off of it. My friends didn’t really like it. My second batch, I added sugar to it—insane amounts of sugar. And yeast converts sugar to alcohol, so I got maybe 17 percent alcohol. It was like a port or a sherry.

What are you going to do with all of this alcohol?
I don’t know what I’m going to do! This year, with the cider I’m making, I’m going to have like 300 bottles. In my head, I’m like, “Oh, 300 bottles, that’s easy.” But then I’m starting to see what it’s going to look like. It’s going to be huge. I’m probably going to store it at my mom’s.

Does your background in science help your brewing?
I think it is helpful, because I’ve been trained through school to be methodical, and use the scientific process. That’s what I’m aiming for, is to get scientists and engineers involved. You have to apply the scientific process; you can’t just change six things at once, because then you don’t know what caused what. And you have to be incredibly clean—you have to wipe down everything. Scientists and engineers are a little more methodical that way. But brewing is incredibly easy. The Beer Nut has kits that have everything you need. You have malt extract, hops, sugar for bottling, and it’s all in one kit. Other than that, you need a 5-gallon pot, sterilizing equipment, bottles.