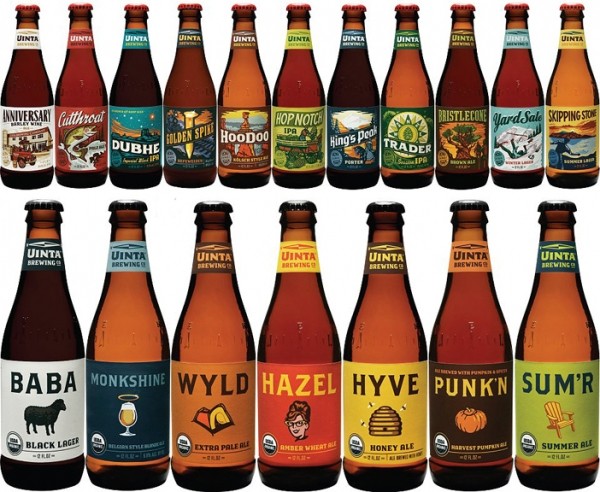 With so many talented new kids on the local brewery block, it’s easy to overlook and forget about some of the older folks—pioneers who helped make Utah into a craft-brew nerve center, of sorts. One such operation is Uinta Brewing Company, which will celebrate its 20th birthday next winter.

Yep, it was way back in winter 1993 that now-president Will Hamill cranked up the fermenters and created Cutthroat Pale Ale, Uinta’s flagship beer. Back then, Uinta was mostly available only in bars and restaurants. With increased demand, however, Uinta installed a bottling line in 1996 and quickly became a mainstay not just in liquor stores, but also in supermarkets throughout the state.

Many of the names of Uinta beers are inspired by Utah’s historic and natural attractions, including King’s Peak Porter, Golden Spike Hefeweizen and Dubhe, the latter of which is named after the Utah Centennial star. Personally, my favorite Uinta beer label is that of a skier eating it on the slopes, illustrating Yard Sale Winter Lager.

Since 2001, Uinta has been 100 percent wind-powered. Hence, the Uinta slogan that you find on everything from its beer labels to the corks in large-format bottles: “Earth, Wind and Beer.” It’s a reminder of Uinta’s long-standing commitment not just to brewing excellent beers, but to doing so while practicing environmental stewardship. In addition to wind power, in 2011, Uinta installed solar paneling on the roof of its brewery. So, maybe the slogan should be: “Earth, Wind, Fire and Beer.”

The folks at Uinta are nothing if not prolific. Although some of the beers are seasonal (Skipping Stone Summer Lager, Oak Jacked Imperial Wood-aged Pumpkin Ale and Organic Hazel Amber Wheat Ale, for example), by my count, Uinta produces some two-dozen brews, divvied up into three brew lines: Classic, Organic and Crooked. The latter was launched in 2010 and features “big beers”: big in flavor, big in size (750 ml. bottles) and big in alcohol, ranging from 9 to 13 percent alcohol by volume. Some of these beers are aged in whiskey, oak or bourbon barrels prior to bottling. Kudos to Uinta, by the way, for stamping a bottling date on each of its brews. It’s nice to know how long the beer has been sitting on a shelf.

Obviously, I can’t review Uinta’s 24 or so beers here. But, I will touch on a few of my favorites. Lately, I’ve been drinking a lot of Hop Notch IPA. I love its beautiful, dark-amber color, crisp mouthfeel and hints of grapefruit on the tongue. This is a top-notch American-style IPA. I also really like Detour Double India Pale Ale (9.5 percent alcohol by volume), with big-time citrus notes, some floral aromas, nice malt backbone and bursting with American hops.

Uinta’s Tilted Smile Imperial Pilsner is another beauty. With Saaz hops in perfect balance with Pilsen malt, it’s a crisp, clean pils that features label art by Salt Lake City artist Leia Bell. But if I were forced to choose just one Uinta beer to drink, I wouldn’t. Instead, I’d choose Anniversary Barley Wine, which I often pour as a late-night treat instead of Port, along with some strong cheeses and a good book.