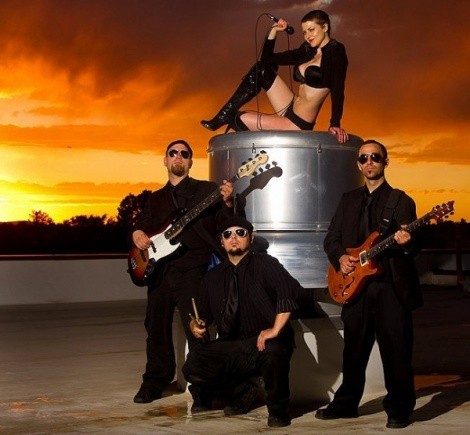 Most bands have a voice and a message they convey through their music, but most of the time what they’re revealing is something cliché like “party on!” or “sex, drugs and rock & roll!”

This, refreshingly, is not the case with locals Uncle Scam and their frontwoman Ischa Buchanan. Their brand of what they describe as poli-rock (as in political) is all about positive things like sexual liberation, freedom of speech and overall female empowerment.

“One thing I think is that our genre is something people have heard before, but not seen before,” explains Uncle Scam lead guitarist Raffi Shahinian.

Uncle Scam has been around since 2005, but had a man on lead vocals for years. That all changed in 2009, when the band’s singer quit and their longtime friend Buchanan tried out. Shahinian, Drew Gingell (drums) and Ryan Brown (bass) all agreed that it was time for a change. “We wanted a girl because dudes are always so flaky, and we wanted to switch it up. We had three try out, but Ischa was definitely the one with the most potential. We wanted someone who could sing and bring out our melodies,” Shahinian recalls.

Buchanan is from a fashion background but showed up at tryouts with a few songwriting classes under her belt and lyrics to several of their previously all-instrumental songs. Her effort paid off when the group selected her to be the newest member. “I was so nervous and excited,” Buchanan recalls. “They are an amazing group of friends and musicians. It was like hopping on a train that’s already moving.”

Uncle Scam has definitely been on a fast track since she joined the band. They have released three EPs and one album, Redneck Funeral, and are about to release a sophomore album named after the first song, “Heavy Cream.”

“We all thought that was a song that represented the album really well. It’s all in the lyrics,” Buchanan explains, singing the first verse: “Don’t waste my time with all your fantasies and ploys/ I don’t mess around with children/ I don’t want to be one of your toys/ I don’t know why you’d think I’m flattered, I don’t want to be your wet dream/ You must just like all your girls with sugar and heavy cream.”

Heavy Cream was recorded earlier this year at S.I.S Records with producer Toby Seljaas. “The album hides nothing with fancy production; it’s the band, straightforward,” Seljaas says. “Their approach was to sound like they do live. Ischa’s unique vocal style was very impressive, a lot along the lines of Joan Jett or Veruca Salt. Raffi’s guitar style is very honed and impressive; the bass-and-drums foundation made the whole record shine.”

In addition to recording, Uncle Scam has been playing around town and accumulating a fan base. It’s no wonder, because with each performance, Uncle Scam—and particularly Buchanan—push new boundaries. “My lyrics are provocative. I like to dress up as different beings. At each show, I’m a different person, and I challenge your perception of what sexy is with every wig I put on. I use the Uncle Scam platform to question life and its realities.”

Uncle Scam donated the proceeds from their recent CD release party to local charities. Heavy Cream and all their other music can be purchased on their website, UncleScamRocks.com, and the band will be touring this fall.