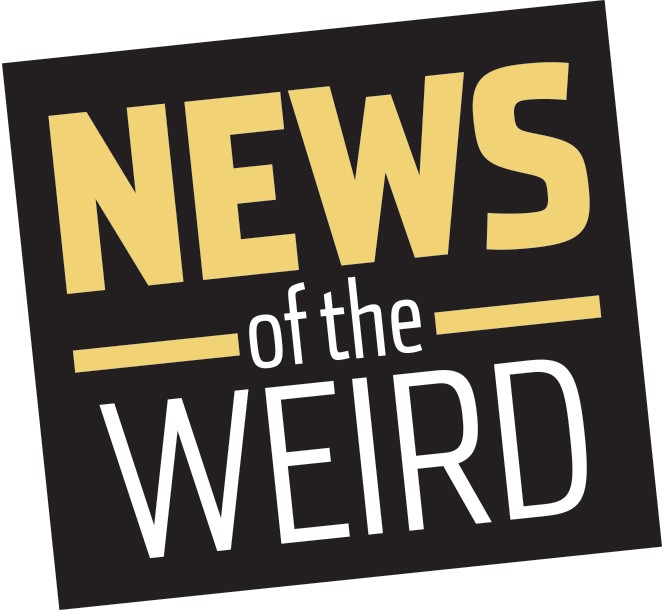 New World Order
In December, Canada's supportive organization The Transgender Project released a biographical video of the former Paul Wolscht, 46, and the father of seven children with his ex-wife, Marie, describing his new life as not only a female but a 6-year-old female, Stephoknee Wolscht. She told the Daily Xtra (gay and lesbian news site) that not acting her real age (even while doing "adult" things like working a job and driving a car) enables her to escape "depression and suicidal thoughts." Among the trans-age's favorite activities are (coloring-book) coloring, creating a play-like "kingdom" and wearing "really pretty clothes." Stephoknee now lives with the couple who adopted her.

Unclear on the Concept
Thee, Not Me: American "millennials" (those age 18 to 29) continue a "long-standing tradition," the Washington Post wrote in December, describing a Harvard Institute of Politics poll on their views on war. Following the recent Paris terrorist attacks, about 60 percent of U.S. millennials said additional American troops would be needed to fight the Islamic State, but 85 percent answered, in the next question, that no, they themselves were "probably" or "definitely" not joining the military.

Exceptional Floridians
1. Police in St. Petersburg reported the December arrest of a 12-year-old boy whose rap sheet listed "more than 20" arrests since age 9. He, on a bicycle, had told an 89-year-old driver at a gas station that the man's tire was low, and when the man got out to check, the boy hopped in the car and took off. 2. A driver accidentally plowed through two small businesses in Pensacola in December, creating such destruction that the manager of one said it looked like a bomb had hit (forcing both—a tax service and a casket company—to relocate). The driver told police he was attempting to "travel through time."

Compelling Explanations
1. Breen Peck, 52, an air-traffic controller who has been having career troubles in recent years, was arrested during a traffic stop on New York's Long Island in December when officers found illegal drugs in his car. "That's meth," he said. "I'm an air-traffic controller. I smoke it to stay awake." 2. In a "she-said/he-said" case, wealthy Saudi businessman Ehsan Abdulaziz, 46, was acquitted of rape in December in England's Southwark Crown Court, apparently persuading jurors of "reasonable doubt" about his DNA found in the alleged victim's vagina. Perhaps, his lawyer said, Abdulaziz was still aroused after sex with the other woman in the apartment and accidentally fell directly upon the alleged victim lying on a sofa.

Ironies
Christopher Manney was fired from the Milwaukee Police Department in 2014 after shooting a black suspect to death in a case bearing some similarity to 2015 shootings that produced "Black Lives Matter" protests—not fired for the shooting (adjudged "not excessive force") but for improper actions that preceded the shooting (not announcing a valid reason for a pat down and conducting a not-by-the-book pat down). Two days before the firing, he had filed a disability claim for post-traumatic stress disorder from the shooting and aftermath, and, in November 2015, the city's Annuity and Pension Board, following city law, approved the claim. Thus, Manney, despite having been subsequently fired, retired with full disability, with basically the same take-home pay he was receiving when fired.

Wrong Place, Wrong Time
In November, a 62-year-old customer at Ancient City Shooting Range in St. Augustine, Fla., was hit in the lower abdomen area by another shooter, 71, because the victim was standing behind the target ("for some reason," was all a fire-rescue spokesman would say). The shooter thought the man was elsewhere on the property.

Least Competent Criminals
Oops! 1. Jasper Harrison, 47, working inside the storage unit in Edgewater, Fla., where he grows his marijuana, heard a helicopter overhead on Dec. 9, panicked, and called 911 to turn himself in to pre-empt what he presumed was a SWAT raid. Actually, the helicopter belonged to a local news station headed elsewhere, but police later arrested Harrison based on the 911 call. 2. Lloyd Franklin, 34 and suspected in a North Carolina double murder, fatally shot himself in a Bensalem, Pa., motel room in November when police knocked on the door. However, cops actually had come to arrest another man in the room on a parole violation.

The Continuing Crisis
Elaine Williams, 47, was arrested in December in North Forsyth, Georgia, and charged with trying to buy a baby for her daughter, 14, via an ad on Craigslist. Williams said her daughter said she "wanted a baby and would get one with or without (my) help." (Bonus: Williams lives near Jot Em Down Road.) [Forsyth County News, 12-7-2015]

The Aristocrats!
1. A customer had to be dragged from a burning sex shop by firefighters in the notorious Reeperbahn "sin" section of Hamburg, Germany, in November when he refused orders to evacuate. He had shut himself inside a private booth to watch a film ("Throbbin Hood") and was heard complaining (while coughing from smoke inhalation), "I haven't finished yet." 2. Police in Richmond, Virginia, announced in December that high school math teacher Kenneth Johnson III turned himself in for several recent residential shoe thefts. Each time, the shoes taken from homes were returned to their owners but with "bodily fluids" added. [Daily Mail (London), 11-25-2015] [WTVR-TV (Richmond, 12-5-2015]

Update
Road to Nowhere: The "Bridge to Nowhere" played an outsize role in politics a decade ago as an example of uncontrolled government spending (before Congress killed it). (Ketchikan, Alaska, planned a sleek international airport on nearby, uninhabited Gravina Island, but needed a sleek $450 million bridge to get there.) These days, reported Alaska Dispatch News in November, the original 3.2-mile, $28 million access road on Gravina Island, built to access the bridge, now just ends in a "scrub forest." One optimistic state official said the road gets "more use all the time"—boaters come for "hunting and fishing, berry picking, things like that. It's actually a nice road." [Alaska Dispatch News, 11-16-2015]

A News of the Weird Classic (June 2011)
A prison guard is "the greatest entry-level job in California," according to an April (2011) Wall Street Journal report highlighting its benefits over those of a typical job resulting from a Harvard University education. Starting pay is comparable; loans are not necessary (since the guard "academy" actually pays the student); and vacation time is more generous (seven weeks, five paid). One downside: The prison system is more selective: While Harvard accepts 6.2 percent of applicants, the guard service takes fewer than 1 percent of its 120,000 applicants). [Wall Street Journal, 4-30-2011]

Thanks This Week to Rich Heiden, Rachael Bock and Stuart Worthington, and to the News of the Weird Board of Editorial Advisors.