The exhibition Utah’s 15 showcases a few of the state’s most significant artists. 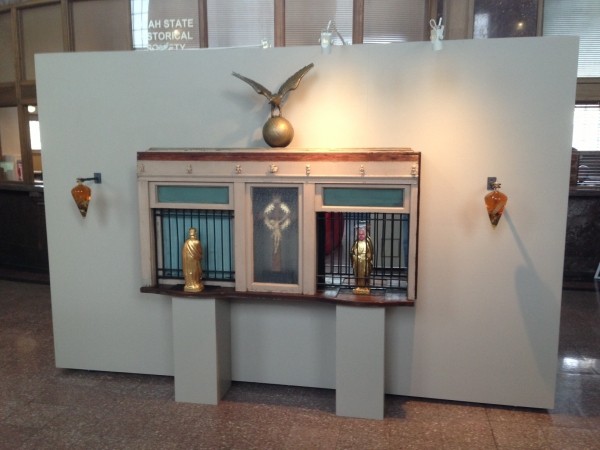 Which artists have made the biggest impact on Utah? Could you narrow that list down to just 15?

That was the gauntlet thrown down by local online arts magazine 15 Bytes (15Bytes.org) in spring 2013. Laura Durham, manager of marketing and public value at the Utah Division of Arts & Museums, had the idea when reading Time magazine’s annual list of 100 Most Influential People. “I believe the arts have a tremendous impact on our communities,” she says. “I couldn’t help but think what this list would look like if it were made up of artists and musicians and dancers.”

Readers were asked to submit nominations of artists who’ve shaped the state of art and culture in Utah. Nominators were required to write at least 200 words about their choices; 70 people nominated a total of 97 artists. “I think the nomination process is an important and distinctive part of this project that gives it a soul,” Durham says.

A pool of more than 200 community members—artists, writers, arts fans and others—then whittled those 97 names down to the top 15, who were announced as Utah’s most influential artists in early 2013.
Now, 15 Bytes and the Utah Division of Arts & Museums are honoring those artists—mostly working in the visual arts—with an exhibition at the Rio Gallery.

Many of the chosen artists have been influential in the community in ways that reach beyond their own art—as is the case with Bonnie Phillips. With her husband, she operates Phillips Gallery, which has supported countless local artists and is one of the longest-running and most successful galleries in town.
Stephen Goldsmith is a noted urban planner; Sandy Brunvand operates Saltgrass Printmakers; Ruby Chacon co-founded Mestizo, a coffee shop, gallery and cultural center. Several others, like John Erickson and Sam Wilson, are noted art professors who have influenced countless emerging artists.

Nationally renowned environmentalist and writer Terry Tempest Williams helped put Utah on the artistic map, and says that the arts are an essential part of who we are here. “Utah is known for its wild beauty, and part of that wilderness includes, and must be extended to, the arts and its landscape of creativity,” she says.

The exhibition is also a look at the way local artists influence one another. Brad Slaugh, known for his humorous paintings and the Poor Yorick Studios’ semi-annual open house, includes a painting of his friend Doug Braithwaite’s sixth-grade class from a photo on Facebook. “He’s one of the artists who almost certainly should’ve been on there before me if there was any justice in this sad, wicked world,” Slaugh says.

Trent Alvey’s installation “Sofa Art” is a statement of affection for the arts community. Visitors are encouraged to sit on the mid-century “Man Ray Lips Sofa” at the opening and be documented on a time-lapse video that will be shown for the remainder of the exhibit—it’s a way for viewers to become part of the artwork.

The showcase of Utah artists is a microcosm of the local arts landscape, and of course includes some cultural artifacts. Frank McEntire’s “Tellers of Cosmic Tales” includes an interior architectural front from the old Park City Post Office. He repurposes objects that have a sense of local history to create dialogue about the sacred and profane.

Woodbury, who’s the co-founder of Ririe-Woodbury Dance Company, adds that the exhibit is simply a microcosm of the local arts scene, and by no means complete. “This is a ‘through the lens’ look at a group of artists who are only the tip of the iceberg, representing all the other amazing, prolific, gifted and extraordinary makers who are working in this state,” she says.

A book that accompanies the list and showcase is available for purchase at the exhibit and around town. Shawn Rossiter, the founder and editor of 15 Bytes, says he was both excited and daunted by the project of publishing his first book. “When I saw how much it would cost, I said, ‘Why did I let you talk me into this?’ ” he says. “But after reading the proofs and sending it off to the printers, I said a big ‘thank you’ because I could see how good this was going to turn out.”

The 15 Bytes staff contributed essays about the artists for the book, which is also a celebration of the publication’s 12 years in existence, and how the local arts perspective has grown thanks to 15 Bytes—itself an influential part of Utah’s artistic landscape.