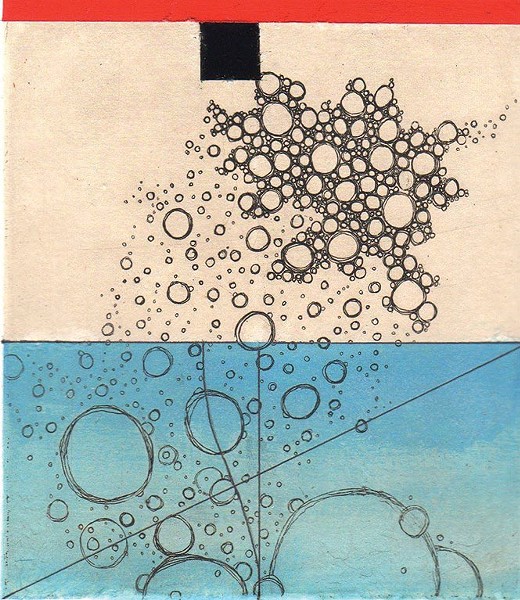 Is visual art like sausage-making? Perhaps it's actually the reverse: Instead of being repulsed by the process, we tend to romanticize it, with the myth of the tortured artist searching for inspiration, subsisting on turpentine fumes, driven by desperation to acts like cutting off one's ear. We've even come to enjoy viewing artists at work at open-studio events, like the upcoming one at Poor Yorick (Sept. 24). But that doesn't mean non-artists have gained insights into the real difficulties of making art.

Local artist and Westminster College instructor Namon Bills, who has curated numerous exhibitions in the area, is behind (un)Finished at the Bountiful Davis Art Center, along with local artist and educator Carrie Wardle Beeke. For it, 30 artists were asked to submit unfinished work, to be assigned randomly to other artists in the group to finish. Beeke says she got the idea when she was in the process of moving. "I had a few pieces of work that I didn't want to throw away," she says, "but at the same time, wasn't sure if I'd ever finish them. I started thinking about what they might look like if someone else finished them for me." After some discussion, (un)Finished was hatched.

The exhibit raises perplexing questions about the nature of the artistic process. The tricky stuff began even before the show opened on Aug. 12, with the logistics of organizing such an event, each artist delivering two works and receiving two to complete and return. "We'd be more organized if we were to do this again," Bills says, "keeping a spreadsheet from the get-go."

The artists then had decisions to make. Beeke has found, "whether a work is finished or not really depends on how the artist feels. Often we start work with an idea in our mind, and sometimes that idea evolves, or doesn't go the way we planned, which can be good or bad, just depends on whether or not the artist decides they can accept the changes and continue work, or if they'd rather abandon a project and start again." Artists like da Vinci left us a number of works that appear unfinished because the subject doesn't seem completely delineated, but still convey an emphatic artistic statement that his intention seems to be realized.

Looking at two random pairings, like Sarah Maynard's completion of paintings started by Cam Carter and Lee Cowan, demonstrate the ways artists' styles adapt to one another, almost grafting themselves together to create a third style—a conversation, a blending. And the show features a number of media besides painting: Dan Toone's sculpture "Lithic Dislocation," completed by Matt Kruback, is almost a metaphor for the dislocating, disorienting quality of this artistic experience, and the video piece "Portal" (started by Aundrea Frahm and completed by Michael Capell) is like a doorway into the process which looks back at your perception of it, through the filter of technology.

Bills' own work in the show opened his eyes: "Creating work started by another artist required a paradigm shift for me, because I had to insert myself into someone else's process and translate that into my own," he says. And seeing the finished work seemed to prompt artists to look at their own work and style with new perspective.

If there's one quality the assignment added to the works in general, it is a sensation of layering. "Collaborative Piece 2" (pictured), started by Chad Crane and finished by Steven K. Sheffield, contains elements of painting and collage, and enthusiastically embraces the chance, "found" element of random collaboration in art-making that the show engenders.

Talented artists are usually said to have a strong voice, or aesthetic sensibility, which makes one of their pieces instantly identifiable. This exhibit, however, points out ways in which a single style can be limiting.

"I hope that this show raises some of those questions for viewers who are accustomed to accepting works of art as finished simply because they're hanging on the gallery wall," Bills says. The results were so intriguing that the experiment seems worth repeating, according to Beeke: "There is talk of a Round 2, with a few changes."

If you are familiar with some of these artists, the sense of seeing works that are both theirs and not theirs is jarring, but refreshing. It fulfills a goal of art to get you to look at the world in new ways. "It forced me out of my comfort zone," Bills says, "but, while that's always awkward in the beginning, I'm grateful for the experience." Participating artist Stefanie Dykes says, "It was a challenge to 'finish' the works, because you had to discover a common thread or some sort of a combined voice to continue forward with the work."