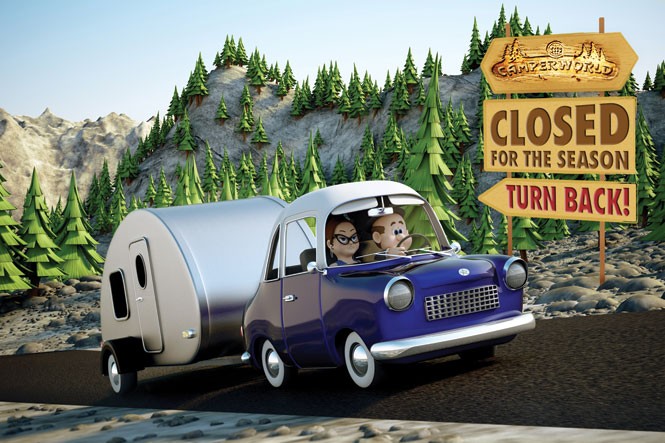 For decades, Camperworld offered members exclusive access to a handful of picturesque private parks across Utah. As long as the annual dues were paid, members could pack their campers to capacity with kids and grandkids and camp next to relaxing hot springs in Plymouth or world-class fishing near the Flaming Gorge Dam, with no reservation necessary. But in 2007, allegations surfaced of serious mismanagement of funds that could jeopardize summer vacations to come.

Since then, multiple lawsuits and angry missives from warring trustees of the company have cast a shadow over the company's future, and campers have found themselves in the middle. In an effort to keep the program afloat, Camperworld asked some members to pay more money than asked in their original membership terms, and, as of Sept. 1, the company was unable to make payments on outstanding loans, which may result in foreclosures on four of the company's eight parks.

Layne Read, an engineer in his 50s who jokes that he is "mentally retired," has been a member of Camperworld for the past five years and says it's not just about the thousands of dollars of membership dues that are at stake, Read says—it's also about trying to preserve "the nostalgia of that family unity that many people have when they go camping."

Camperworld was founded in 1977 by Glendon Hatch, Des Townsend and Bob Blackley and operated drama-free for many years. In 2003, the company began buying and developing three new parks. By 2004, Blackley and Townsend had passed away, and their board positions were filled by Townsend's son Randy and Hatch's son Michael.

In 2006, Glen Hatch stepped down as president of Camperworld to serve a mission for his church. In 2007, acting president Randy Townsend sent out an "urgent message" to members stating that he had discovered that since 2003, Camperworld had incurred $3 million in debt. During the same period, it had sold $8 million in memberships and given $5.2 million to Camelot Marketing—a company then owned solely by Hatch that he had originally founded with his Camperworld partners to market and sell Camperworld memberships.

In 2007, Camelot was taking 62 percent of the profits of membership sales, with 38 percent going to Camperworld for operational expenses and park upkeep. Hatch, responding to City Weekly through his attorney Jon Harper, said that the large commission was competitive with similar companies and accounted for all marketing costs, including mailers, advertisements, buying leads and renting meeting locations.

Hatch rebuked Townsend in an October 2007 letter for plotting "a dark underground conspiracy for personal gain and power."

The conflict escalated into a lawsuit between Camperworld and Townsend that was settled in early 2008. Part of the truce involved increasing the board from three to five members and implementing a nepotism rule that required Michael Hatch to step down from the board.

While the war was over—temporarily—the trust was again in dire straits with the onslaught of the recession. In 2009, Glendon Hatch issued a business plan meant to keep the company afloat that would give members the option of paying the lump sum of $2,200 to cover their dues for eight years (as opposed to the usual $500 annual dues, totaling $4,000 in eight years) plus a $600 assessment. Or, members could just pay the $600 assessment and continue paying their $500 annual dues.

Critics saw this as further evidence of the company's focus on finding short-term solutions to the long-term problem of insufficient dues. At the end of 2012, the Camperworld board not only ousted Hatch as president but also severed ties with Camelot, seeking a new sales approach.

But the board still had to address promises made to members who had previously bought special memberships through Camelot.

Leverne Borton signed up with Camperworld in 2010 while on a trip from Canada to Los Angeles. She and a friend signed up for a package that included access to numerous RV parks across the country that required only $150 in annual dues for life. She, like others, was shocked when the board announced in March 2014 that it would have to collect an $880 assessment from members to keep the company afloat despite whatever offers or exemptions had been previously offered.

"The results of these programs has brought Camperworld to its financial knees," the Camperworld board explained in a March 2014 letter.

This surprise assessment outraged Borton, who canceled her membership.

"I feel the whole thing was a scam," Borton wrote in a complaint to the Better Business Bureau of Utah. "We are two senior citizens on fixed income, and I doubt if we will ever return to Utah."

Since then, sides have squared off, some faulting the new board for not picking up the slack left by the absence of Camelot Marketing, and others saying Camelot's sales were to blame for jeopardizing the company's long-term sustainability.

This year, members sued the board including Don Hackett, a boardmember who oversees public relations, for issuing the assessment without amending the company trust.* Hatch also sued Camperworld in 2014 for failure to pay him residual Camelot commissions from 2013 and earlier. In a counterclaim suit, Camperworld repeated allegations of mismanagement.

Hatch says that it was the new board that mismanaged funds by increasing their indebtedness through more loans after terminating him in 2012.

"Camperworld survived successfully for more than 35 years by making new sales to replace inevitable attrition—as a result of death, divorce, job loss, illness, relocation out of the region, age, sale of an RV, etc.—until the board terminated Camelot," Hatch says.

After Hatch was terminated from Camperworld in late 2012, the new board hired the firm of Wisan, Smith, Racker and Prescott to do an independent audit of the company books for the first three quarters of 2012. The audit found a lack of policies and procedures for dealing with fraud allegations.

"Camperworld has a significant amount of exposure to fraud risks," the audit states.

Hatch says that no fraud was found and that Camperworld's financials were regularly reviewed by an independent CPA. A judge recently made an order that the commissions owed Hatch be paid to him.

In spring 2014, the company gained new board leadership including new president Diane Williams, who says Camperworld plans to sell three parks—including two that were encumbered by loans—and refinance with the bank. She also says the company is currently recruiting a new sales team for memberships.

Read says that while he sees some fault in greasing so many past membership sales with exempted dues and other perks, finger-pointing is a lost cause at this point.

"If they're not done now, it's only because they're hanging on for dear life." Read says.


Editor's note: A previous version of this story misstated Don Hackett's role on the Camperworld board.