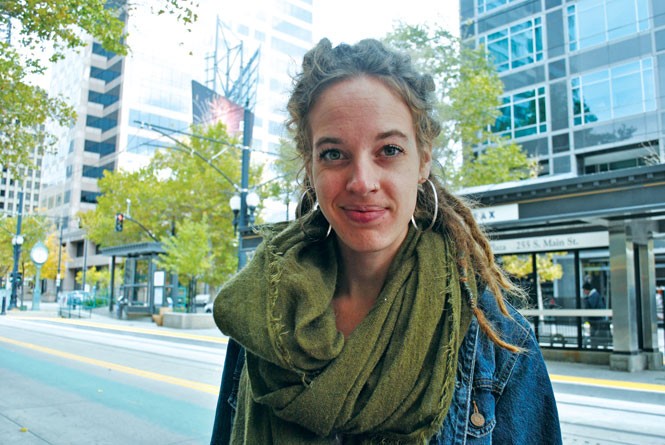 Every day, 25,000 people die of hunger—more than from tuberculosis, malaria and AIDS combined. That's something that Natalie Blanton, a graduate student in sociology at the University of Utah and the chair of the University Service Coalition, has been thinking about a lot since she was a teenager grappling with a conservative upbringing in Heber City. The U's 14th-annual Hunger Banquet, a soup dinner and discussion about hunger in Utah, is Nov. 18 (Union Saltair Room, 200 S. Central Campus Drive, 6 p.m.). Entrance is $5 or three cans of nonperishable goods; all money will go to Utahns Against Hunger and the International Rescue Committee's local New Roots program, and donated canned food will be given to the U's on-campus food pantry.

How has the Hunger Banquet changed in its 14 years?


It started out as a very structured evening. People would come and play various class roles. As I understand it, people would be divvied out depending on percentages of populations in the world, and get like a soup and bread dinner if they were lower class, or a filet mignon if they were higher class. It was a really interesting dynamic of putting people into those places, but I felt really uncomfortable doing that. I think that everyone should kind of be on a level playing field, so we've kind of shifted it. Now, it's just a get-together talking about Utah's hunger issues, and hunger in general and what that really means, and what it looks like internationally as well as in our own backyard. We'll all be eating this really basic vegetable soup that's gluten free and locally sourced from our campus garden.

It's going to be a lot of round-table discussions as well. Each table will have a discussion card with questions like, "What does hunger mean to you? When did you first realize what hunger was?" to kind of get those conversations going. There will be speakers from two local community organizations. The first is Sarah Crowder of Real Food Rising and Utahns Against Hunger. They are a really unique community-farming program for youth development, focusing on sustainable agriculture as well as access to healthy food. And then we have Grace Henley from New Roots with the International Rescue Committee. They are focusing on bringing refugees to a comfortable level of sustainability as far as being able to bring their agricultural practices from their countries of origin here.

Why move away from the class issue?


I have a hard time with food as a luxury. Food grouped with status is really ridiculous. It's that mindset that has gotten us into a lot of issues as far as environment and global disproportionality. It's a really interesting conversation to have, but I wanted it to be very much more of a community event.

What does a world where everyone can equally access food look like? Is everyone eating vegetable soup?


I will forever stand by the fact that meat and animal agriculture is fucking up our planet, and there's no way that it's sustainable to eat like the global north or "developed countries." I have a really hard time with the way that things are divvied out, and how the global north just continues to eat up the global south, as far as resources go. We put our animal agriculture down there and grow our soybeans and our corn down there, and just completely take over those lands. I would love to see more of a local sustainable revitalization, and a lot of organizations are working on that, but it's really hard. We've really learned to lean on the machine that agriculture has become, and we've learned to get really complacent with our bountiful grocery stores. I don't know what ending global hunger would look like, but I'm confident in a lot of the nonprofits working on it. Their push really is for the "haves" to eat less meat and less resource-dependent foods, and the "have-nots" to benefit from not using all of those grains to feed those animals to put on our plates.

So the local-food movement isn't just a snooty food fad?


The whole organic and white-privileged Whole Foods movement is really, really funny, and there's a lot of nuanced things wrong with it. But, I hope that this evening highlights what urban farming can do, and what that initiative can do for Utah. It's making our food and our vegetables more connected to us, and there's not that divide between humans and their food processes. That's what's most important: bridging that divide.


We do a really great/terrible job of ignoring societal woes in Utah, because we do have these rose-colored glasses with this conservative, happy-go-lucky outlook. But hunger is rampant here. I don't think that people think about hunger enough. You think of it around the holidays—like this, when there's an event that brings it to your attention, and then you go buy your truckload of groceries and that's enough. If everyone did a little bit more: taking a little bit off of what they buy at the grocery store throughout the year and donating to these causes that are actually putting meals into people's bellies—throughout the year, not just in December—that's a huge and direct step you can take against hunger in Utah.

What do the people with rose-colored glasses see?


People don't realize that it's so systemic, and that once you're homeless, there's not a lot of power to get out of that. That whole "pull yourself up by your bootstraps" just is not going to work. It's really scary that people do that—they blame and they shame and just lower anyone that is in an unfortunate position. We need to remember that it's all about life chances. I think it's rare when people have that realization, "Oh, God. This could be me if I hadn't gotten that job, or if I did lose my house, or if I did shoot that heroin." I teach a sex-ed class in the jail for Planned Parenthood. Every day I'm there, I realize that if I'd made one stupid decision the weekend before, I'd be right there in that class—and not as the teacher.

Is it even possible for one person to help such a big problem?


It's bleak if people open their eyes. But I'm hopeful, and I'm really excited about people getting connected with nonprofits, the people putting in the legwork in the community. It kind of knocks the rose-colored glasses off, but it gives you a little bit of hope that people are doing this, and there are people who see the same issues that you see, and they are taking steps, no matter how hard they are, to get there.

It's real easy to get bogged down and think that progress isn't going to come, but it just requires getting out of your comfort zone and thinking about it more criticically instead of just, "Oh, that looks awful. I'm sorry you're out there begging on the street." I really have a hard time when people just complain, and theorize, and write about social issues, but don't do anything about it—don't raise awareness with their writing or do the legwork and get out there. I get that volunteering is a privileged ability. But people who can volunteer should be doing it more. And people who can give money should be doing that more. I want to bring these issues to the consciousness of people who do have that privilege, and are able to attend a Hunger Banquet without actually having to feel it themselves.

What's most important to keep in mind is that doing something is better than doing nothing. You gotta pick your battles, pick your causes. You can't support them all, or you'll be too spread thin and the worst advocate. Find the thing that really resonates with you, and give it your all. Put a lot of your efforts there, and then tell people about it.

What else are you working on?


We just started a food pantry on campus for students who are not feeling stable in their ability to get food. It's within the campus bookstore, and that's where, if people bring three cans of food, that's where they'll go. Any student with a student I.D. can access that pantry; it's open Tuesdays and Thursdays right now.

What are your plans for after graduate school?


A lot of my research revolves around the environment and gender and health disparities connected to the environment, so I think that a lot of what I'll be doing eventually will be with international non-governmental organizations, nonprofit work.