Have your Halloween costume together yet? Didn’t think so. What with everything else on your busy urban mind (the Salt Lake City mayoral race, our suddenly dangerous Pioneer Park, where to buy malt coolers for minors, etc.), preparing for America’s favorite pagan holiday probably has fallen by the wayside, much like City Weekly’s cover-feature schedule (no one’s pretending this is anything but filler, trust me).

Download full-size PDFs of each mask by clicking on the image, print ‘em, cut ‘em, add string and voila! You’re ready for Halloween, cheap ‘n’ lazy. Our six scary characters to choose from are:

The Disgruntled Jazz Player
His job consists of putting a rubber ball through a hoop in front of thousands of fans, and he makes more money in a year than you’ll probably make in your whole life—and yet he’s sooo miserable! He’s the Disgruntled Jazz Player, a tortured soul doomed to live a pampered lifestyle, but only when his coach isn’t being a big meanie to him! Professional basketball: The sport of the damned.

HELPFUL CHARACTER CATCHPHRASES
• “I cannot play under these conditions. It’s hard enough being a white guy in the NBA.”
• “Sure, I told the press my team sucks—but we get along great now. Before you leave the locker room, could you remove this duct tape from my balls?” 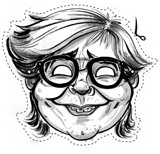 The Local Political Blogger
The over-inflated sense of self-importance, the translucent skin that hasn’t seen daylight since the
2004 elections, the Red-Bull-stained boxers and “Citizen Journalists Do It Unfiltered” T-shirt: Beware the Local Political Blogger, or he’ll write something nasty about you—and tag it accordingly! His Internet minions of the night number in the dozens and hang on his every link, so watch your easily punned quotes!

The Real-Estate Agent
From her asexual polyester power suit to her InstaSell.com realtor’s license, the spooky Real-Estate Agent is ready to sell you scares! And a frighteningly good deal on a Magna rambler that may or may not have been built on a pet cemetery—you like animals, don’t you? Hurry up and make a decision; she has to get to the Farmers Market before rugby practice—boo!

HELPFUL CHARACTER CATCHPHRASES
• “It’s hard to believe this $400,000 condo was a
7-Eleven just a few months ago, huh?”
• “No, that’s not meth residue you smell—those are memories!” 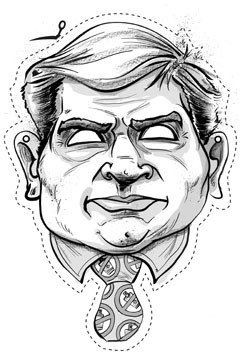 The DABC Commissioner
He is the law—however that law is being interpreted this week. The Department of Alcoholic Beverage Control Commissioner can shut down your club and fine you into oblivion because your bartender didn’t take six steps to the left, twirl, moonwalk back and recite the 21st Amendment in English and Spanish before serving a second shot of tequila to a functional adult—now that’s scary! A private mask for members.

HELPFUL CHARACTER CATCHPHRASES
• “One liquor store per 100 square miles? I’m no drinker, but that sounds fair to me.”
• “That light beer will lead to a whiskey-fueled interstate killing spree. It’s science.”

The Militant Vegan
She represents 3 percent of the population, but the Militant Vegan is a big enough pain in the ass for five—more like 95 should you make the mistake of going out to eat with her! Oooo, boys and girls, she’s taking you on a scary trip to … the haunted vegan restaurant! Gaze in horror at the 95-pound tattooed boys in skintight jeans! Reel in shock at the Tofu Tenderloin! Hear the terrorized screams of the ghosts of a thousand slaughtered broccoli stalks! Suffer through another lecture about your possibly leather shoes! Every life is precious, and she’d just as soon kill you as explain it again.

HELPFUL CHARACTER CATCHPHRASES
• “Animals are nicer than man—they don’t start wars! They kill each other one-on-one!”
• “I care about my body, which is why I only smoke
cigarettes tested on humans.”

The Classic Rock Dude
He’s old, he’s creepy, he’s been wearing the same denim vest since the Sammy Hagar show at the Salt Palace in ’84—he’s the Classic-Rock Dude who hits you up for smokes at every club in town! Eek! Cower in terror as he rambles on about ancient bands you’ve never heard of who played “fuckin’ killer” shows in venues that no longer exist (“The Rock Squat on State, man!”) and yammers about some rag called The Private Eye! Yikes! (Lynyrd Skynyrd flask sold separately.)

HELPFUL CHARACTER CATCHPHRASES
• “You need a bass player? I got all the gear, bud! Just gotta get it outta the pawn shop.”
• “Check out my van, ladies—airbrushed that
sweet dragon myself.”
cw