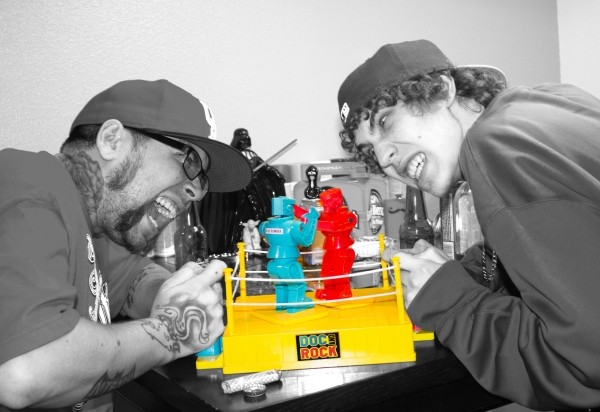 It’s that time of year—those few special months where you can’t go to a single barbecue without some drunk guy spitting Will Smith verses. And, really, that’s OK—that’s the natural order of things. There are few musical pairings that blend as nicely as hip-hop and the sweltering heat of summer. It’s that magical combination that encourages liquor-store Locs, jean shorts and Lugz, and white people butchering Nelly lyrics like, “It’s getting hot outside.”

Without a doubt, the pinnacle event of this winning combo is the summertime hip-hop festival, those multi-stage, high-energy afternoons where if you don’t leave without a shirt and a bad case of “hip-hop arm,” you’re either the DD or you didn’t do it right.

This summer promises a handful of ways in which to put your hands up, but the Urban Legends Music Festival happening June 7 at Barbary Coast is this season’s only all-day, all-local hip-hop gathering—11 hours of 100 percent Utah-produced rap music.

“The DJs are diverse, the emcees are diverse, the vendors are diverse; it’s a nice chance to dip your toes in, check the water and see what’s going on with the valley,” says Urban Legends organizer and local emcee Nick Maez, aka Dr. Nick. “I’ve been doing this for six years now, and I’ve worked with a lot of these artists, and honestly, picking these guys was tough; it was like picking your favorite kid.”

In a way, Maez’s hand-selected lineup covers the full spectrum of Utah hip-hop. The roster includes more than 30 acts and is a unique spread of veteran emcees like Dusk Raps, KIS.B, Burnell Washburn and MC Pigpen as well as young up-and-comers like Dine Krew, Dozi Duzy and New Truth. “Really, the inspiration behind this festival was to offer everybody an equal opportunity,” Maez says. “All of these artists deserve a chance to represent their talent, their art and their love for the state.”

When Maez talks about “equal opportunity,” what he’s referring to is the new music-festival standard of nickel & diming local acts and paying an exorbitant amount of cash to the event’s headliners. “One of the big factors for doing [Urban Legends] was to make sure it’s fair,” Maez says. “I know a lot of promotion companies; when they do big festivals, they charge the local artists a good deal of money to do even a 15-minute set. For [Urban Legends], there’s no charge for any of the artists. In fact, they make 30 percent of each ticket they sell and they get a free merch booth.”

In a way, it’s almost too much hip-hop, because throwing a large-scale hip-hop festival is a colossal pain in the ass—just ask Murs, who recently closed shop on Paid Dues. Sure, every type of music festival has its hang-ups, but dealing with rappers takes a special skill. Imagine actually wrangling cats, but these cats are exceptionally high and refuse to be on time for anything.

Maez doesn’t seem too worried about corralling this many rappers into one location. “Really, that’s the beauty of it,” he says. “Getting all these guys together allows fans to be exposed to something new. You have B-Side fans who’ve probably never given Burnell a listen, or maybe Ill Fede fans who’ve never heard Zigga and Bentley. I’m trying to give everybody the opportunity to get their dues.”