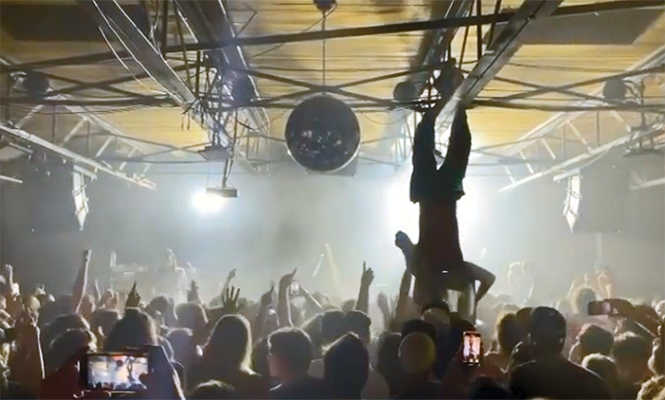 It's not every day that we have occasion to celebrate the 21st birthday of a beloved local venue—and it's especially fun when it's a 21+ venue. The potential jokes are many: "Urban Lounge is finally old enough to get into itself." "Urban Lounge doesn't need those bins and bins of fake IDs they've collected from patrons over the years anymore!"

But one of the funniest things to consider when a venue like Urban Lounge—which hosts shows nearly every night of the week all year long—turns 21 is that among some SLC circles, there's something called getting "Urban Lounge wasted." To ring in its 21st, we're diving into some of the drunken escapades of Urban Lounge wasted-nights past, and what makes the venue such a special place to lose yourself to the music—in more ways than one. With these inspirations in hand, you should go celebrate with a stacked lineup of bands for a big birthday bash, this Saturday, Aug. 20.

If you haven't been to Urban often, you may not know its history. Before re-doing their bar and bathrooms a few years ago, and zhuzing up the joint with some freaky wallpaper (hello white cats), local musical stalwarts like Cathy Foy remember that it was really just a watering hole.

"The most memorable time for Urban Lounge in my career playing there was between 2004 to 2007," Foy says. "It was just a dive bar that catered to local bands."

Before becoming the big venue party spot it often is today, it was pure local stomping ground. She continues, "Every Friday and Saturday night there were like six local bands that played. I feel like that is where most of my peers cut their teeth, and there was a super-close local music scene that really supported one another. It has completely evolved into something much bigger now, and I think it really serves people being able to see touring acts, but back in the day, it was a Salt Lake rock bar, and that time really holds a place in my heart." Foy is one of a stacked list of artists who will be appearing at the birthday show.

The "bigger" days Foy mentions are where we're at today, and while Urban does still often have free and affordable locals-focused shows, it's when the small-slash-mid-size venue sells out huge touring acts that it feels like an exciting night to go all in on plastic cups of booze and beers to repeatedly quench yourself with during sets, as well as between them. To kick off the embarrassing stories, one time yours truly was getting too into the TOPS show sometime in 2016-ish, and during a bathroom break with a friend, we both reached for the door to head back out to the dancefloor—slamming it into my glasses and cutting my eyebrow. I spent the rest of the night dancing and not noticing the pain of the wound while other drunk people fussed over me.

Another embarrassing one is donated by a local named Matt, who explains, "My dad was Lissie's business manager for a while. I went to two of her shows. First one I got wasted, went backstage, and she walked in while I was eating her bread."

Another local, Annie, remembers a rather more chaotic moment last summer: "Last July at the indie dance party, we were on acid, wrecking our bodies to MGMT when the venue literally overheated and the venue lost power. From flashing lights and drowning in bass to pitch black/drunk complaints in an instant. Fun while it lasted!" Another one involving mid-aughts indie favs? An unverified but fascinating rumor that at a STRFKR show in 2018-ish, the crowd was dancing so hard that everyone started ... putting the F in STRFKR. An anonymous source says "When they were done [playing], everybody just resumed being bored hipsters at a show again. I have no idea where this story came from, I heard it from multiple people—of course none of them were there."

While that story may be the wildest, if apocryphal, a few other bands playing the upcoming birthday party have their own memories. The Mellons recall "seeing Deerhunter in 2017 when Bradford Cox went off on a tangent and started throwing cash at the audience." Wasted on cool-guy indie rock power, perhaps?

The band Say Hey has a more personal tale. Vocalist Drew Mulvey explains, "The setting is an Urban Lounge backyard show circa spring 2021. Killer lineup, great turnout with a crowd itching to get rowdy as covid restrictions start to ease. About three-fourths of the way through our set, Chris (guitarist) throws an entire bottle of tequila across the stage to me. I catch it one handed and, not wanting to waste such an epic moment proceed to take a swig ... then immediately coughed it up all over the stage like a bitch." He adds, unabashed, "Happy birthday Urban Lounge, you beautiful shining pinnacle of the SLC music scene."

Besides Say Hey, The Mellons and Cathy Foy and her band The Mellows, the indoor and outdoor mini-fest and birthday bash will include music from Savage Daughters, Kipper Snack, Herring, Jacob Skeen and Angel Magic. The 21+ shindig starts early at 6 p.m. and tickets are $10 at theurbanloungeslc.com.