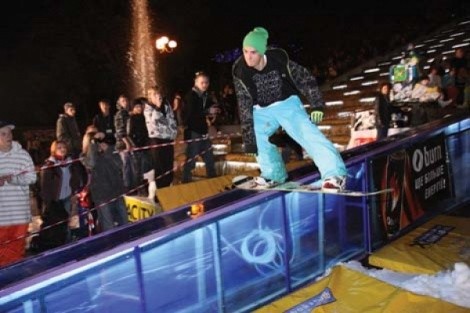 Eve SLC is a three-day end-of-year celebration of all that makes living in this city great— including the skiing and snowboarding available in the nearby mountains. Rather than relocating the snow-sports portion of the festival to higher elevations, Eve is bringing the mountains to the center of the city by building its own snow edifice at Gallivan Center. Mount Gallivan, if you will, will be 25 feet high and 100 feet long. Even the snow will be from the mountains, as dump trucks will haul in 60 tons of the white stuff over three days.

The end result will be three rails featuring a 10-foot gap-to-box, a 30-foot down-flat-down rail and a 30-foot-rainbow down to box. Sixty of the top male and female skiers and snowboarders from the area will be on hand to compete on the downtown man-made terrain (the competition is also open to those who feel qualified to register). The athletes will compete for three nights, with the winners being crowned on New Year’s Eve. Competition begins at 4 p.m. each day and continues through 9 p.m. with an additional 9:30-11 p.m. session on the last night of 2009.

Tickets are available at EveSLC.com, at Fresh Market and Beans & Brews, or at box offices located at The Gateway, Gallivan Center, Pierpont Avenue and Rose Wagner Performing Arts Center.