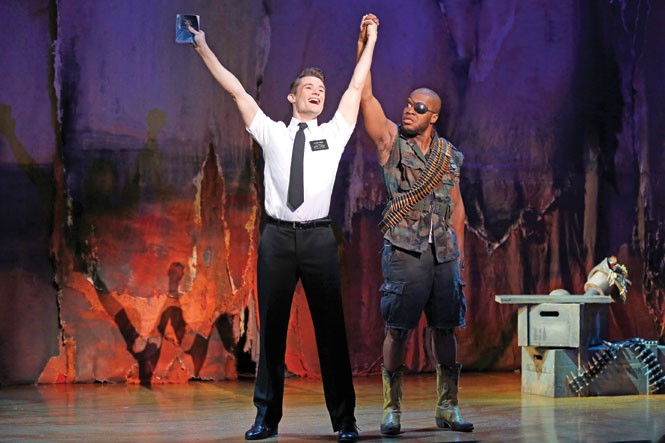 While Labor Day weekend might not mark the technical end of summer, it's certainly the time that fall begins to creep its way into our consciousness. September also marks the launch of many arts organizations' new seasons. While not every Utah company can be included here, it's a chance to plan your attendance of plays new, classic and much-anticipated.

Broadway Across America-Utah
SaltLakeCity.Broadway.com
It's perhaps the most buzzed-about local premiere in years, so we might as well start at the end, even though it's a year from now: The touring production of The Book of Mormon finally comes to Salt Lake City (July 28-Aug. 9). The Broadway Across America season also features Nice Work If You Can Get It (Sept. 23-28), the Dr. Seuss holiday classic How the Grinch Stole Christmas (Nov. 18-23), The Illusionists (June 23-28) and the stage-musical adaptation of the Sundance hit and Oscar-winning Once (April 7-12). Season add-ons include Disney's Beauty & the Beast (Jan. 30-Feb. 1) and Mamma Mia! (March 13-15).


The Ogden-based company takes on some provocative subject matter with its two remaining 2014 productions: JulieAnn Carter-Winward's world-premiere one-act about online relationships in the real world, The Waiters (Sept. 5-20), and David Mamet's Race (Nov. 7-22), about attorneys considering taking the case of a white man accused of a crime against a black woman.


The musical menu for the PTC season finds a balance between a newer favorite like The 25th Annual Putnam County Spelling Bee (Sept. 12-27) and the season-closing classic The Music Man (May 1-16), plus the special concert presentation of The Rocky Horror Show (Oct. 24-25). It's the same with the plays, which include Arthur Miller's The Crucible (Feb. 13-28) as well as the Tony Award-winning Peter & the Starcatcher (Dec. 5-20), Paul Rudnick's cheeky I Hate Hamlet (March 20-April 4), the comedy One Man, Two Guvnors (Oct. 31-Nov. 15) and the world-premiere of Kenneth Jones' Alabama Story (Jan. 9-24).


The company's mission of giving theatrical voice to women's experience continues through this season's three main productions. Caridid Svitch's Spark (Oct. 30-Nov. 15) looks at the experience of going to and returning from war through the eyes of three sisters. Hellman v. McCarthy (Feb. 16-March 14) tells the fact-based story of the long conflict between celebrated authors Lillian Hellman and Mary McCarthy. And Julie Jensen's Mockingbird (April 16-May 2) follows a young woman with Asperger's syndrome as she tries to understand the world.


Even as this year's Saturday's Voyeur wraps up its run, the company begins the year with the promise that Voyeur will return with a 37th installment (June 24-Aug. 30). Between now and then, SLAC brings works by authors familiar from past seasons, including John Logan, with a look at the world of a Hollywood super-agent in I'll Eat You Last: A Chat With Sue Mengers (Sept. 17-Oct. 26) and William Missouri Downs (last season's The Exit Interview) with the oddball romantic comedy Mr. Perfect (April 8-May 3). Completing the lineup is Gina Gionfriddo's story of two grad-school friends whose lives take different paths in Rapture, Blister, Burn (Oct. 22-Nov. 16), the holiday family-friendly production A Year With Frog & Toad (Dec. 5-27) and Elaine Jarvik's world-premiere culture-clash drama Two Stories (Feb. 4-March 1).


The relative upstart company offers a fall production of Peter Shaffer's 1962 one-act play The Private Ear (Sept. 19-Oct. 4), about a recluse seeking help from a friend to impress a young woman.


It's a musical finish to the 2014 season for the company, which features Jeff Bowen and Hunter Bell's 2006 Off-Broadway favorite [title of show], a reflexive one-act musical about the creation of a one-act musical for the New York Musical Theatre Festival (Nov. 7-16). And Bare (Jan. 16-31) brings a rock-musical flair to the story of a group of high school students making their awkward way toward adulthood.


The musical version of Alice Walker's The Color Purple (Sept. 11-27) kicks off a season that is also scheduled to include Robert Caisley's caustic comedy Happy, about a dinner party gone to the dark side (Nov. 6-22) and the annual showcase of new works, the Page-to-Stage Festival (April 30-May 16).